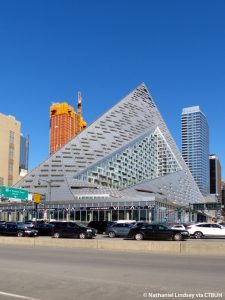 No Canadian towers are among the winners and finalists in the 2016 Council on Tall Buildings and Urban Habitat (CTUBH) awards announced June 22.

The most dramatic of the towers was from New York, which won as the Best Tall Buildings – Americas. The VIA 57 West tower was designed by Bjarke Ingels/SLCE architects and Thornton Tomasetti as structural engineer. They describe the 142-m high pyramid shaped structure at West 57th as a “courtscraper” i.e. a hybrid between the European perimeter block and the traditional Manhattan highrise, combining the advantages of both. Located on the Hudson River, the building is “a dynamic new standard for integrated urban infill development.”

The awards recognize tall buildings from four worldwide regions. From those a worldwide winner will be selected and announced in Chicago on November 3.

The winner from the Middle East and Africa was another dramatic design. The Cube in Beirut, Lebanon is 57 metres high and designed by Orange Architects/CBA, with Bureau d’Etudes Rudolphe Mattar as structural engineer.

Best Tall Building from Asia and Australasia is the Shanghai Tower in China. From Europe it is The White Walls of Nicosia, Cyprus.

Canadian companies were involved in the building that won the 10 Year Award, which recognizes proven performance. It went to the Hearst Tower in New York City, which was built in 2006 over the shell of a 1928 landmark office building. Adamson Associates, architects of Toronto, designed the 182-metre tower along with Foster + Partners, and WSP Cantor Seinuk was the structural engineer, and WSP Flack + Kurtz was mechanical-electrical engineer. The awards cited the building’s “distinct, thermal efficient diagrid that provides a vast open interior.”

The Innovation Award went to Pin-Fuse, a dual-element structural system of joints and frames that slip at pre-set loads to dissipate energy and achieve ductility during seismic events.

To view all the award-winners and finalists, click here. 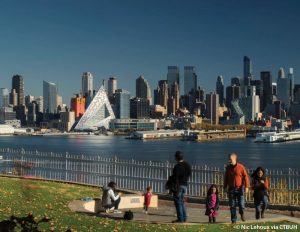 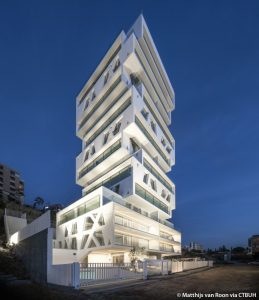