The new wastewater treatment plant upgrades in the Town of Petrolia provide a more efficient and sustainable solution for the burgeoning Ontario community. 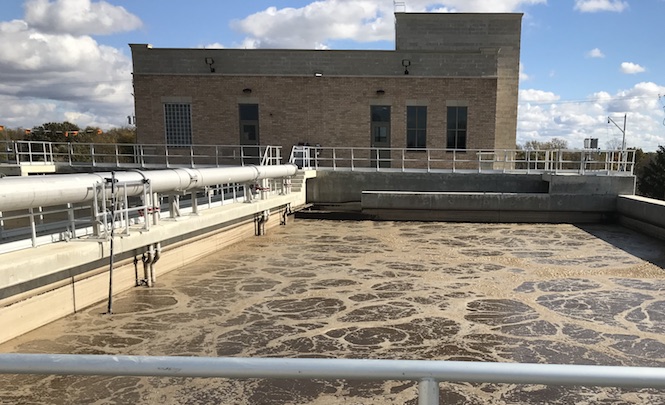 The Petrolia Wastewater Treatment Plant (WWTP) infrastructure was deteriorating after 40 years of service. The Town of Petrolia, a community of 5,500 in southwestern Ontario near Sarnia, was aware of the need for expansion at their WWTP to meet current and future flows while also reducing maintenance costs of its aging equipment. Emergency shutdowns and bypasses at the plant were a detriment to the Town’s limited wastewater expenditure budget.

The Town retained CIMA+ to provide a comprehensive engineering and project management solution, including an innovative approach to upgrade and retrofit the existing plant while also providing the capacity to treat the Town’s local landfill leachate. The project resulted in a state-of-the-art plant that has reduced the Town’s emergency wastewater expenditures and supports the community’s ongoing development and growth plans.

CIMA+ also assisted the Town in their application for provincial and federal grant funding for the majority of the project. Together the governments supplied two-thirds of the project funding, approximately $13.5M dollars.

The upgraded Petrolia WWTP is an extended aeration facility with tertiary filtration and an ultraviolet (UV) disinfection system which discharges treated effluent into Bear Creek.

The expansion project increased the plant’s rated capacity by 39% to accommodate current flows (which frequently approached or exceeded previous rated capacity), and future growth in the area within the next 25 years.

CIMA+ undertook the task of upgrading and expanding the WWTP at its existing site while the facility remained in operation. Construction and start-up of the upgraded plant was planned so that once the new facility was built, the old plant was sequentially decommissioned; the existing secondary clarifiers were retrofitted to aerobic digesters, and the existing aeration tanks were converted to a maintenance storage facility.

The design to provide reliable capacity, redundancy, and performance for the expansion, included:

Petrolia’s new WWTP facility combines new buildings with retrofit/repurposed existing structures. The new headworks building provides power to all major components of the plant, and the inlet pumping station which is functionally positioned to overlook the plant.

The existing aeration tanks were covered with a roof structure, externally cladded and repurposed into a maintenance and storage facility that also houses the blowers for the aerobic digesters.

Two overhead entrance doors and separate access doors were cut in through the existing concrete walls to allow for equipment and machinery access.

Electrical and mechanical including lights, overhead door openers, and HVAC were installed in the repurposed tanks. The design incorporated site grading, and front and rear driveway entrances to the overhead doors.

Half of the existing tanks will be repurposed into a training facility for the Petrolia & North Enniskillen Fire Department.

The proximity of the residential area (slightly more than 100m clearance) around the facility’s site was a significant constraint during the design and construction. The architecture of the facility was improved to be more visually appealing.

As discussed, the new plant was constructed while the existing plant remained in operation. The new facility was designed with the site’s constraints in mind, eliminating larger sand filters in favour of compact tertiary treatment disk filters to meet effluent criteria, and using common walls between many different process, administration and storage areas.

The project also converted the existing secondary clarifiers into aerobic digesters to further reduce the new plant’s footprint and the project’s capital expenditure.

The design included a pumping station to service the existing lagoons adjacent to the facility, which were previously used for bypass flow and for digested sludge storage with seasonal discharge directly to Bear Creek.

The pumping station will be used to transfer lagoon supernatant to the headworks of the new plant for full treatment and disinfection. This is possible due to the new plant’s expanded capacity. 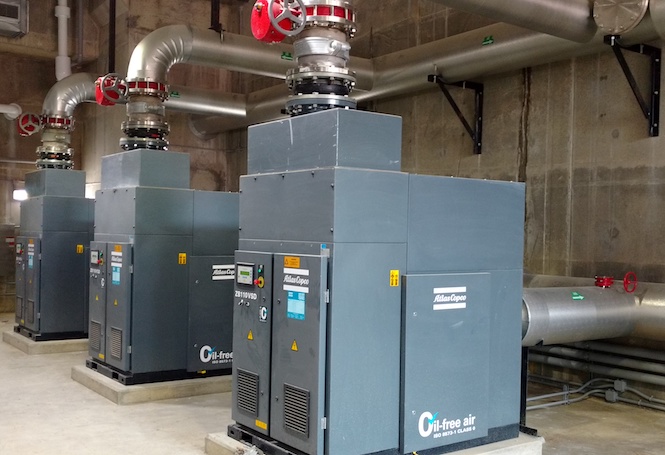 The upgraded WWTP provides many economic and social benefits to the residents of Petrolia and the surrounding communities.

It was developed in the most cost-effective way possible, and its compact layout and shared-walls design provides improvements from an energy efficiency perspective by reducing heat loss from the buildings. The Town’s unexpected expenditure on equipment malfunctions for the facility have also decreased.

As another cost saving measure, every effort was made to reuse existing tanks and buildings, where they are still structurally sound, to minimize the overall project cost. Reliable equipment will ensure that the residents of Petrolia are not burdened with emergency expenditure costs in the coming years.

The aesthetics of each of the new buildings at the facility (headworks, blower/pump, and filter/ UV) incorporate Petrolia’s Victorian heritage with 19th Century Victorian industrial style of the brick detailing, window placement, flat roof and brick parapet. The building’s design and surrounding landscaping offer a pleasing view for local residents.

The Petrolia WWTP experienced 50 days of bypasses between 2008 and 2011 due to equipment malfunctions and insufficient capacity. One of the major objectives of the upgrades project was to allow the plant to handle current and future flows and protect the Bear Creek receiving body.

The resulting solution incorporated safeguarding against treatment plant bypasses by allowing storage in the lagoons during extreme flow events. In addition, a new pumping station will transfer lagoon supernatant to the new plant headworks for full treatment during low flows.

The Town will also have the ability to reduce or eliminate trucking of the solid waste leachate to external disposal facilities by treating the leachate at the new plant upon completion of connecting a landfill leachate forcemain to the Town’s collection system. This will further increase the Town’s sustainability.

The new Petrolia WWTP now suits the Town’s needs with increased redundancy in case of required maintenance, and the new facility’s capacity provides room for growth which supports the Town’s development plans.

The design approach also provides operational flexibility with component redundancy of all major equipment, allowing buffering during high flow events without compromising effluent quality or causing wash out of the plant’s biomass.