Jury Comments: “We see this building as a testimony to the value of multidisciplinary engineering. It uses a bridge building method with long spans in order to create a green roof above an underground arena. The steel girders are six metres above the arenas and withstand significant unequal pressures from the earth without using internal buttresses.” 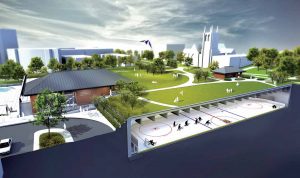 The city of Westmount on the Island of Montreal decided to replace its existing arena with a new partially underground structure. Going underground was a way to eliminate the architectural anachronism of having a massive arena structure in a heritage park and adjacent to the Westmount Park United Church. Also, the thermal stability found underground contributed to the building’s LEED Gold certification since the building could take full advantage of the underground thermal stability — between 12°C and 15°C year-round.
Certain engineering feats are so spectacular that they become iconic of the cities where they are located. A building like the Westmount Recreation Centre that has been largely “buried” can claim no such status. On the contrary, its usefulness transcends its appearance, representing a completely different tour de force.

Borrowing bridge building methods
Building such a large underground arena with a park space on its roof was a challenge. The structural engineer borrowed from bridge-building methods, creating a green roof supported by long-span steel girders. The 6-m-high empty spaces above the rinks posed a real challenge because the structure needed to withstand the pressure exerted by unequal underground loads without using internal buttresses. Bridge girders were an ideal solution because they require only half the vertical clearance of a lattice steel structure (1.4 m instead of 3 m). In this way, the depth of the excavation was reduced, which in turn reduced costs.
The design features 37 extra-long metal beams of 32.5 metres each. The two rinks run parallel to each other and are separated at the ceiling by two central 64-m long header joists resting upon pillars placed on a 0.9-m-thick raft foundation. Supporting the beams that span the ice rinks — 19 on one side and 18 on the other — are 700-mm concrete walls that include elastomeric bearings nested within niches, just like a bridge. The header joists supporting the other end of the I-beams also feature a particular type of reinforcement: their stiffeners each contain 14 slots elongated horizontally by ±30 mm. This way, even bolted to the stiffeners, the beams can still move forward and backward on their axes, which was particularly important for pouring the concrete for the roof and compensating for the beams’ projected loss of camber.

Roof and site drainage
The roof anchoring system, consisting of studs welded to the girders binding the metal structure to the concrete apron, forces the roof to react as a monolithic material, somewhat like a living diaphragm that transfers vertical and lateral loads to the foundations.
The design of a landscaped environment on the building’s green roof added another element of complexity. Hills, made up of a layer of topsoil on expanded polystyrene blocks (100% recyclable) assembled like a 3D-puzzle, achieved the desired effect while minimizing weight.
The project also required efficient drainage for the entire site. For this, the 5,960-m2 green roof is a central element, acting as a natural filter and cleanser, and rerouting the water into underground drains. Two drainage structures were designed and stacked vertically. The 600-mm upper structure contains a bioretention basin capturing 83% of the annual volume, while the 1500-mm lower structure, containing a “stormchamber” basin, filters 17%. The peak stormwater flows generated for the entire site (including parking lots) are 25% lower than before the development.
The ecological and recreational overhaul, has greatly improved the site’s appearance and sightlines. Also, the site excavation provided an opportunity to dispose of 150,000 tonnes of contaminated soil.