The broad plan has myriad implications. 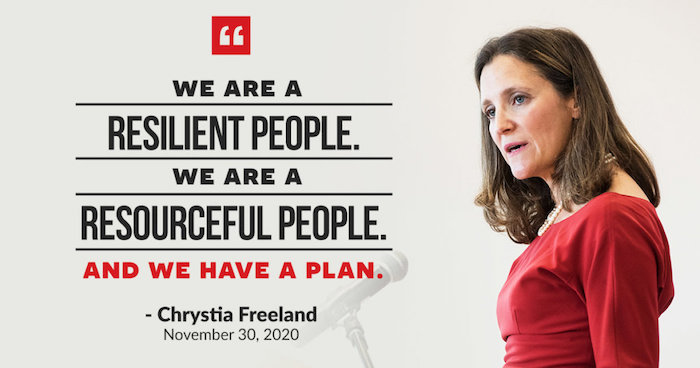 Federal minister of finance Chrystia Freeland tabled the government’s fall 2020 economic statement on Nov. 30, offering new details about supports and relief measures, including some relating to the COVID-19 pandemic.

The following details from the statement are particularly relevant to Canada’s consulting engineering community:

“We hope grants are matched with loans and other programs to help Canadians shift to deeper retrofits,” says Corey Diamond, Efficiency Canada’s executive director. “In addition, the current approach can be complemented by finding new ways to retrofit at lower cost, faster and more conveniently—e.g. via a ‘whole neighbourhoods’ approach.”

The statement also elicited a response from the Association of Consulting Engineering Companies – Canada (ACEC-Canada).

“ACEC is encouraged the federal government is developing a plan to invest up to $100 billion in stimulus over the next three fiscal years, roughly 3% to 4% of GDP,” the association said in its review of the forecast. “While it is anticipated infrastructure will continue to be a significant element of the plan, details are not known at this time. The government is expected to prioritize investments that support a green and sustainable economy and result in demonstrable benefits to communities. While ACEC supports such investments, we will be encouraging the government to also make investments that will rebuild and grow the economy, so its recovery plan is financially viable. ACEC is looking forward to details on the government’s role in continuing to help municipalities invest in traditional core infrastructure.”