“There were geotechnical issues, seismic issues, traffic issues, alignment issues, labour disputes … it’s a miracle this got done in an accelerated time frame, because the bridge next door was falling down.” – Jury 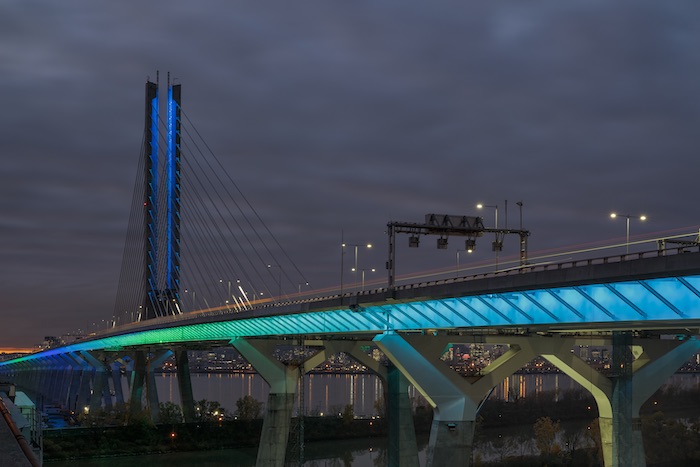 When the time came to replace Montreal’s Champlain Bridge, the federal government sought to provide high-quality, sustainable and distinctive infrastructure. SNC-Lavalin, serving as the main consulting engineering firm within the Signature on the Saint Lawrence Construction (SSLC) consortium, designed and constructed the multi-billion-dollar project with the help of experts from around the world, who resourcefully managed challenges, including a tight schedule and harsh climatic conditions, and delivered a new bridge with an estimated lifespan of 125 years.

In addition to six traffic lanes and shoulders, the new bridge would include a central corridor dedicated to light rail transit (LRT) and a multi-purpose path for active transportation (i.e. by foot and bicycle). The project also entailed rebuilding and upgrading the approaches to the bridge, with the redevelopment of a 4.5-km urban federal highway corridor.

With approximately 50 million vehicles and $20 billion in goods crossing the bridge each year, its role in the regional economy is very significant. 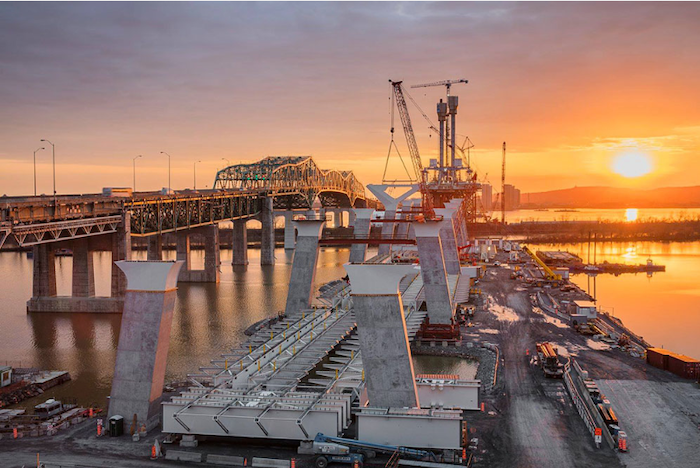 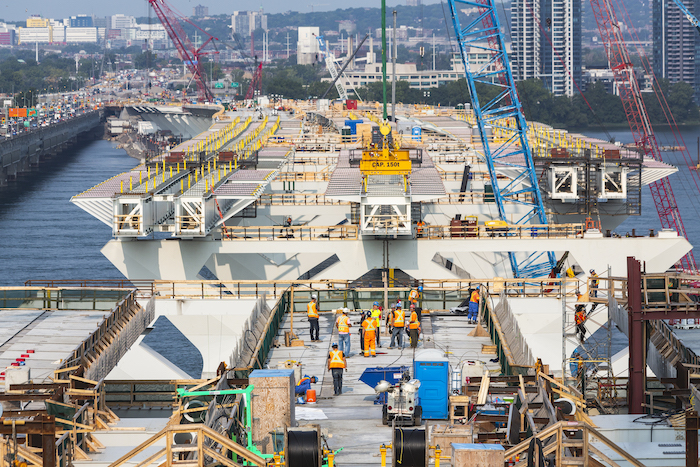 The project involved the replacement of the old Champlain Bridge with a new 3.4-km long structure comprising three separate decks, supported by 37 piers, and a main cable-stayed portion with a 170-m tall elevation pylon. The new bridge had to be built on an accelerated construction schedule, due to the critical condition of the old bridge, which had to be maintained until the new bridge was complete.

One of the strategies selected by SNC-Lavalin and its consortium partners to achieve these objectives was to maximize the prefabrication of concrete elements and the assembly of steel elements on-site, which required the construction of temporary jetties with high-performance docks geared for marine access along the St. Lawrence River. This strategy enabled a balance between fast construction for the bridge and maintaining optimal control over the quality of its components.

Further, several unique pieces of equipment were designed and manufactured to maximize on-site efficiency and productivity, including the following:

In parallel to the on-site fabrication of the concrete elements, SSLC opted for off-site manufacturing of oversized parts, which were to be transported to the site mostly by road. The deteriorating condition of the old Champlain Bridge and the ring road network, however, led to more restrictive weight limits, forcing the consortium to review its logistics plan, so as not to jeopardize the timely arrival of parts critical to the successful completion of the project.

Consequently, SNC-Lavalin broadened the plan to deliver more than 10,000 components—mostly of non-conventional sizes and weights—through different modes of transportation, with a mix of seaway, rail and road shipments.

The initially planned method of construction for the erection of the main span over the seaway was to lift 15 main span segments from the pylon. A major change was made, however, to accelerate construction and complete the infrastructure in a timely manner: a temporary tower was installed east of the seaway to allow for the erection of segments, in parallel, on either side of it.

Vehicular and marine traffic was maintained throughout construction by undertaking various provisions for trade and transit routes for the general population along this key transportation corridor. 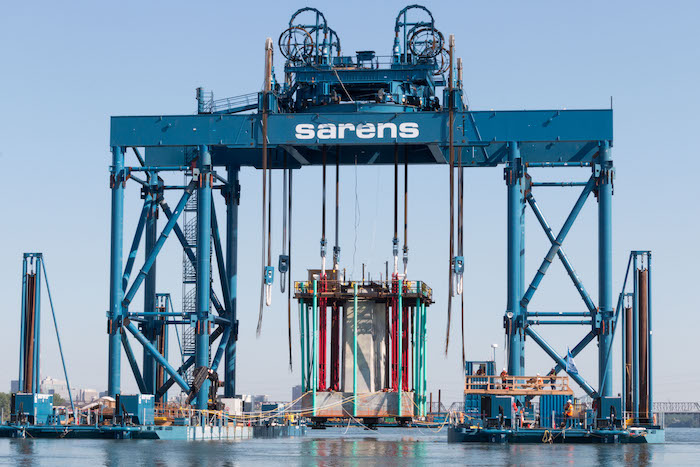 The consortium used reference designs, three-dimensional (3-D) visualization and animation in collaboration with an architectural review committee to ensure it could deliver a project as envisaged by the federal government.

It was important for this client that the design be consistent with the general principles of the International Federation for Structural Concrete’s fib Bulletin 34 – Model Code for Service Life Design. This bulletin addresses service life design (SLD) for plain, reinforced and pre-stressed concrete structures, with a special focus on design provisions for managing the adverse effects of degradation.

SNC-Lavalin’s experience in geotechnical matters helped SSLC achieve this objective. Its efforts included modelling corrosion time for the concrete, using Software for Transport and Degradation In Unsaturated Materials (STADIUM), which was developed within Quebec.

Other measures to ensure concrete quality included the use of thermal probes, infrared (IR) thermography and numerical analysis, all of which helped assess thermal behaviour and, thus, the risk of the concrete cracking.

Further, to prevent the danger of ice falling from the cables, the consortium conducted new research and designed a custom sheath for the cables. 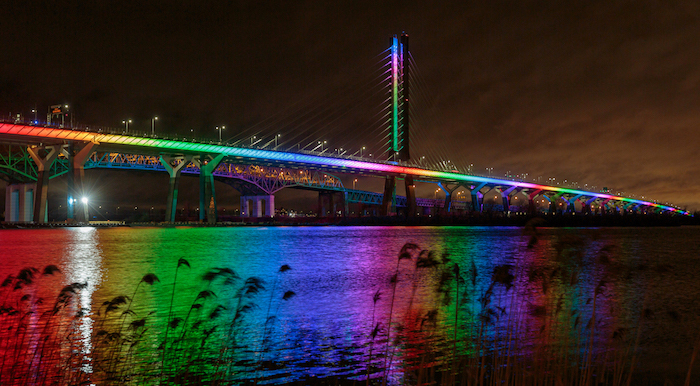 While the bridge lights up in different colours, illumination levels were adjusted to prevent light pollution and interference with bird migration.

Working in partnership with the project owner, Infrastructure Canada, the SSLC team developed and maintained sustainable practices in the construction of this major infrastructure project.

The team actively implemented relevant measures and achieved the highest level of recognition by the Institute for Sustainable Infrastructure (ISI)—Envision Platinum—based on an assessment of the integration of 60 sustainable development criteria. In fact, the project is the first in Quebec to be evaluated by ISI for Envision certification and the first large-scale bridge anywhere in Canada to earn the award.

In addition to the environmental benefits of a 125-year lifespan, a dedicated LRT corridor and active transportation, other measures to minimize the impact of the bridge’s construction and commissioning on the environment include the following:

The project team also collaborated with Infrastructure Canada to consult with a wide range of stakeholders and set up communication lines accordingly, to help ensure the needs of the community were met during construction. Subsequent measures included school programs, funding for cultural events and a shoreline cleanup by project workers.

The ongoing and informative dialogue with stakeholders helped the consortium design and build a major project while maintaining the respect and dignity of the surrounding communities. 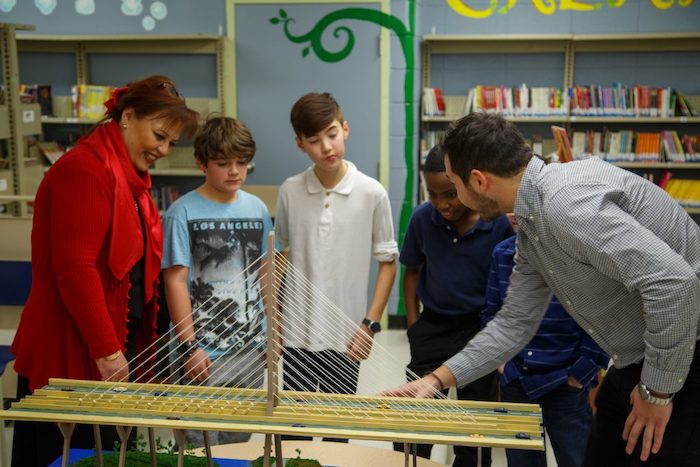