“Value engineering within budget and on time that met the social needs of the community.” – Jury 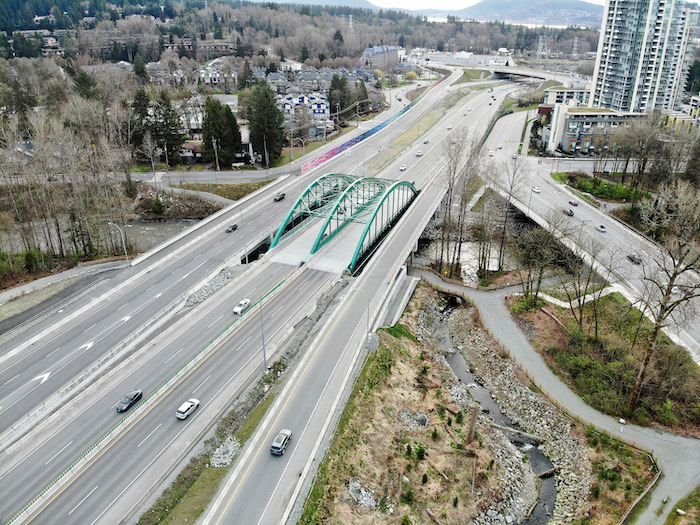 The Highway 1 Keith Road/Mt. Seymour Parkway Interchange Project and Lynn Creek Connectivity Improvement Program has addressed congestion, road safety and municipal connectivity needs for Vancouver’s North Shore communities. At $98 million, this is one of the largest and most complex design-bid-build (DBB) projects British Columbia’s Ministry of Transportation and Infrastructure (MoTI) has ever undertaken. Part of the larger $198 million Lower Lynn Improvement Program, the project was developed to reduce public frustration over one of the province’s busiest sections of highway.

McElhanney had to overcome the challenge of working within a suburban, constrained corridor, including fish-bearing habitat, parks, residences and commercial properties. The firm successfully delivered the project for MoTI through innovative design and scheduling strategies and added environmental and active transportation benefits for the region.

MoTI’s greatest need was to complete the project within a constrained timeline to meet the funding requirements of three levels of government. During conceptual design of the entire Lower Lynn Improvement Program, the project came up against strong public and political pressure, as some funding partners felt $150 million in funding did not go far enough to resolve congestion. Instead, they believed an eight-lane collector-distributor arrangement was needed, estimated to cost more than $265 million.

McElhanney assessed an alternative solution to meet all stakeholder needs while maintaining the schedule and reducing the estimated cost. Within three months, the firm developed a $198-million plan that was unanimously approved by all stakeholders, funding partners and local First Nations, thus saving the provincial government $67 million while maintaining the program schedule.

With a commitment to a shortened timeline and lower budget, there was no room for overruns. Ultimately, the project increased capacity by widening Highway 1 from six to 12 lanes.

Understanding the project was under intense public scrutiny and a highly constrained schedule, McElhanney’s key strategy was shortening the design schedule from 15 to six months. The time saved provided an additional construction season to ensure the project was completed by its deadline.

To accomplish this, McElhanney had three bridge and three highway design teams work simultaneously, in parallel and integrated with geotechnical, drainage, hydrotechnical, utilities, active transportation and multi-use path teams. Environmental specialists secured the required regulatory permits within four months, enabling MoTI to release an advance works package to install bridge piles and riprap in Lynn Creek during the in-stream fisheries work window, one year ahead of its own expectations.

All four bridge sites along Highway 1 had liquefiable soils in areas of high seismicity. Pile foundations with consideration of liquefaction and lateral deformation were required for the Lynn Creek bridges. Geotechnical and structural engineers collaborated to incorporate springs in the overall structural model to simulate and estimate the lateral behaviour of the bridge and piles under the design seismic hazards, including liquefied conditions. 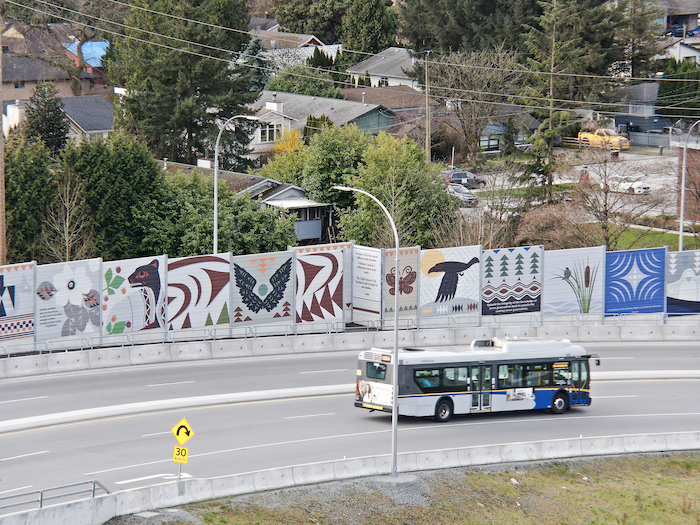 In addition, incorporating cast-in-place parapets on the Lynn Creek structure retrofit added 30 years to the service life of this aging infrastructure and allowed for simplified traffic detouring during construction.

To mitigate the differential settlement of geotechnically challenging soils, the project was constructed in a staged manner, with the approach fills built early on. This strategy allowed traffic to be detoured onto the new bridges and highway for one to two years before the top lift asphalt was installed. (McElhanney had no ability to close traffic during construction.)

This provided additional ‘insurance’ for the province; should additional settlement occur, the top lift paving would smooth out any differential settlement. The result is a smooth highway, resilient for the long term.

A range of benefits

Through co-ordination with North Vancouver’s new Phibbs Exchange, McElhanney worked to add bus bays at the exchange and increase transit access along the corridor to further reduce traffic congestion. With the addition of 3.5 km of new bike paths, sidewalks, trails and other active transportation features along the corridor, cyclists, pedestrians and transit users would all enjoy increased access.

McElhanney also prepared the general arrangement and design of sound walls to reduce noise impacts for residents, while beautifying the space. The walls use a mechanically stabilized earth (MSE) retainer that blends into surrounding nature.

Through upgrades to highway ramps to meet current standards with widened shoulders, as well as the development of a collector-distributor road system within the context of multiple closely spaced highway interchanges, it is expected the corridor will achieve a 25 to 45% reduction in collisions, improving overall safety.