“This is a cool, interesting project that will have a valuable impact on its community.” - Jury

Due to its location along the Gulf of St. Lawrence and its low elevation above sea level, the Nutashkuan Innu First Nation—a community of 1,077 residents—had been subjected for several years to recurring problems with flooding during the annual spring thaw. The issue became particularly severe in 2017, when approximately 60 homes were flooded, resulting in $4 million worth of damages.

After the 2017 spring floods, WSP was commissioned to quickly develop a solution to protect the community through a controlled lowering of the regional groundwater table.

Nutashkuan is located on the shores of the St. Lawrence River at Pointe Parent, where the estuary and the Gulf of Natashquan meet. Relatively flat, the region is characterized by vast and very permeable sandy deposits, which have a direct effect on the level of the groundwater table.

WSP’s engineering team had to find a way to control the rise of groundwater in the affected area. Traditional solutions included raising homes, installing pumping stations in several locations or installing pumps in each of the affected homes. Even if technically feasible, these solutions would have required major investments, trained operators and maintenance for further upkeep, which made them unattractive to the Band Council.

An innovative solution was proposed and studied, which included creating a tunnel upstream of the community to intercept and reroute underground waters away from the affected homes, therefore lowering the water table all along the affected community. Difficulties included avoiding any pumping systems, the lack of terrain slopes, nearby Gulf high tides and future climate variations. 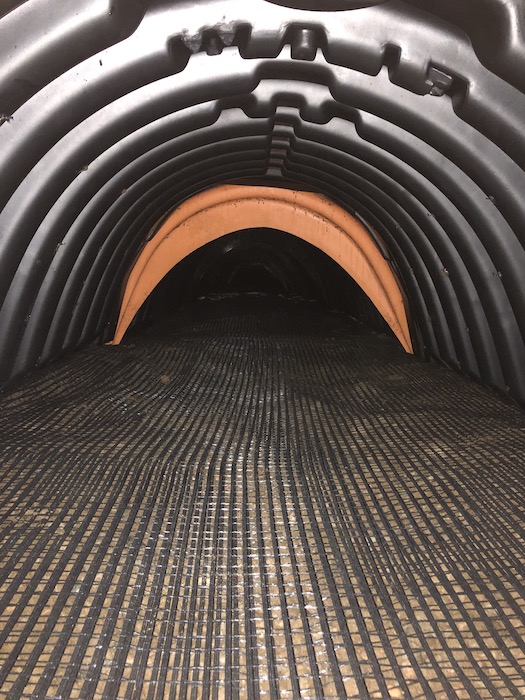 The project’s complexity was amplified by the community’s remoteness and its specific location along the shores of the Natashquan River. All of the community’s homes were built without footing drains, since no stormwater network had enough slopes to carry these waters away by gravity.

The frustration of flooded residents and the urgency of preventing further events the next spring added to the difficult conditions under which the team had to work. Within six months, the designers worked with hydrogeology experts to implement a groundwater monitoring program and in situ permeability tests and to generate a computer model to reproduce the hydraulic behaviour of the groundwater table, based on knowledge of the area’s terrain acquired over several years of collaboration and confirmed by subsequent investigations.

Since water catchment had to be very efficient over a considerable distance in a flat area, WSP’s team developed a new application by installing underground infiltration chambers, which are traditionally used to hold rainwater under paved surfaces.

A total of 830 m of catchment chambers were built—each 1.5 m wide, 0.9 m high and 3 m deep—along Route 138. These chambers were completed with 540 m of 750-mm diameter pipes, creating an underground stream that bypasses the community.

The installation of piezometric probes at several locations, validation of tide levels and analyses of soil were carried out quickly and simultaneously, along with funding applications and environmental authorizations.

As per the hydrogeological study, the solution was a highly efficient deep drainage system capable of intercepting large volumes of groundwater and carrying it to the gulf despite the absence of an adequate slope. The system also had to withstand the action of iron ochre present in the soil, which could quickly obstruct the holes in conventional perforated pipes.

Climate change will likely have an increasing impact on variations in the region’s groundwater table. The new system will provide long-term and durable protection. 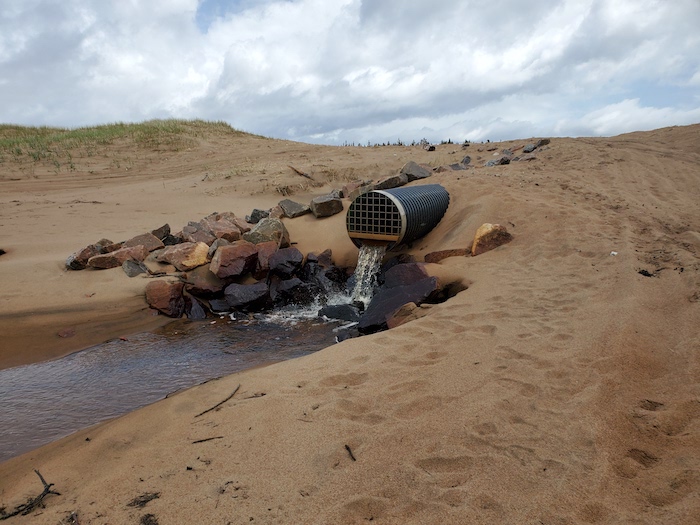 The drainage system carries large volumes of groundwater to the gulf despite the absence of adequate sloping.

The system requires no electrical power and its operation and maintenance costs are minimal. The locations of the drainage chambers along Route 138 were strategically selected to avoid excavation work in the community’s residential area and unnecessary deforestation, since vegetation growth is very slow in the region. The use of trench boxes, instead of conventional excavation methods, also minimized tree felling.

The system was built in late 2019 at a cost of only $1.8 million and proved efficient in protecting entire community against flooding, as confirmed by piezometric measurements from 2019 to 2021.

The project also had indirect social benefits for the community. The hiring and training of local workers and the use of local resources contributed to stimulating the economy.

As the catchment system ensured the efficient drainage of surface water, a storm drainage system based on the same general principle was built in 2020 to lower water levels and redirect stormwater to the river. In the short term, surface water drainage will allow the community’s roads, which are mainly made of gravel, to be paved.