“The project team conserved a beautiful heritage structure, ensuring the old methods of construction were used and the original form restored.” – Jury 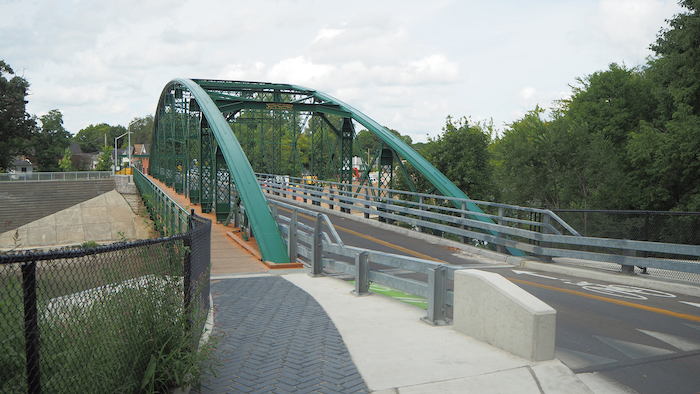 Constructed in 1875 over the Thames River in London, Ont., Blackfriars Bridge is one of the oldest surviving wrought-iron bowstring arch-truss bridges in North America. The city retained Dillon Consulting to rehabilitate it, providing added strength while preserving its esthetic character.

To replace or restore?

Since the days of horse and buggy, Blackfriars Bridge has served London not only functionally as a crossing for vehicles, but also as an iconic community symbol. Connecting the city’s central business district to the Blackfriars heritage conservation district, the arch-truss bridge represents the peak of wrought iron metal construction, just before steel emerged as the dominant material.

In 1948, Dillon was commissioned to repair and strengthen the bridge, providing a second service live of more than 70 years. By 2010, the city was considering replacing it and called on Dillon again to conduct a multifaceted risk assessment, which drew on subject matter experts like Michael Bartlett, an engineering professor at the University of Western Ontario.

The next phase involved a detailed, arm’s-length inspection and evaluation, followed by immediate short-term repairs. This work provided critical insight for Dillon to lead an environmental assessment and consider options ranging from removal and replacement to a non-functional replica. The public embraced the strategy of rehabilitation.

The detailed design and construction strategy combined almost-forgotten techniques with modern technologies. Hot riveting methods from the mid-1900s were brought back. Replica members were fabricated and integrated into the original bridge.

Dillon recommended lifting the bridge off its bearings, disassembling it, shipping it to a fabrication facility for rehabilitation, then returning it to the site for assembly and erection. This process required the largest mobile crane ever used in London. The construction phase was accomplished in 18 months.

The original wrought-iron bowstring arch-truss bridge was built in 1875.

Wrought iron is a heterogeneous material with impurities, which limited the project’s fabrication options and eliminated most welding approaches. For this reason, old-world hot riveting techniques were brought back. Where needed, modern button-headed tension control bolts provided an historic appearance without compromising performance.

Computerized machining was used to create replicas of the smoothly rounded wrought-iron cruciform members distinctive to the original forging methods. Finite element analysis was applied to the critical arch-to-tie connection at the bearing.  Customized adjustments were required to address extensive dimensional inconsistencies of the original members.

The logistics of removing, assembling and erecting the bridge involved a custom field assembly table, field welding of tension ties, tilt-up erection methods, temporary shoring for cross-members and a 45-m radius scheme for the massive crane.

Many components required a careful merging of original details with modern code requirements. The latticed members from 1875 required batten plates for load sharing, for example, while the original railing needed regulatory authority permission for its lattice infill to be preserved. The original stone masonry abutments were stabilized using lightweight cellular concrete backfill and refined analysis.

The bridge was reconstructed without entering the water for temporary support at any stage over the project’s eight-year period. Suspended scaffolding under the bridge, for example, was used for inspections. This avoided undesirable impacts, demonstrated high-quality engineering can be achieved while protecting the environment. 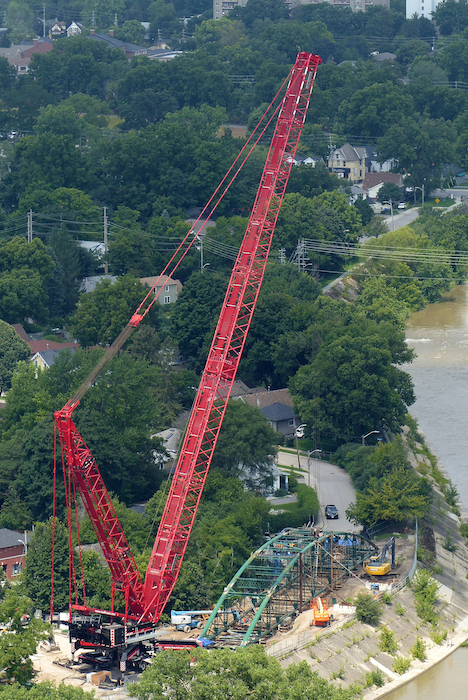 Returning the bridge to its site required the largest crane the city had ever seen.

The original bridge patent signs were lost over the years. Using photographic records, replica plaques were cast out of remnant wrought iron reclaimed from the bridge. A gateway sign was installed across the roadway, using letters also forged from reclaimed iron. And a plaque was installed commemorating the Canadian Society for Civil Engineering’s (CSCE’s) 2016 designation of the bridge as a national historic civil engineering site.

A viewing plaza was added to provide a vantage point, connecting to parks and roadways. The plaza features a public monument constructed from bridge remnants, along with interpretive signage.

On Dec. 1, 2018, Londoners celebrated with a reopening ceremony for the bridge. To echo the 1875 opening, the mayor and local dignitaries traversed the bridge by horse and carriage.