“We are impressed they were able to accomplish so much in such a short time and avoid risk to the environment and public safety.” – Jury 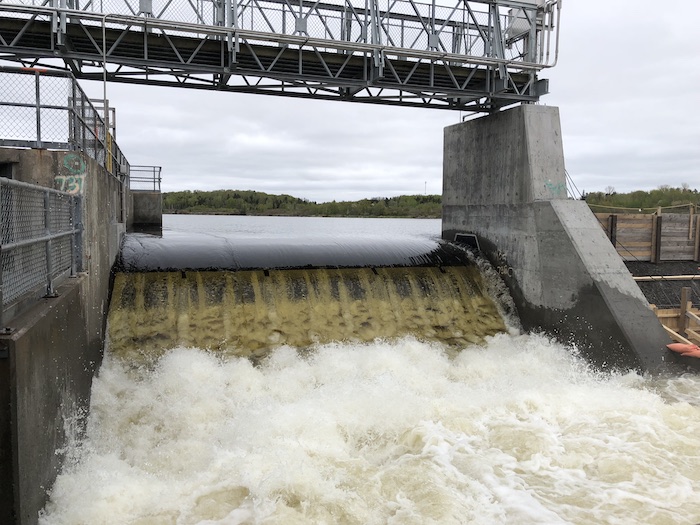 Constructed in 1909, Newfoundland’s Grand Falls Dam eventually deteriorated to the point where remedial repairs were required. The contractor, Pennecon, asked Hatch to devise a rehabilitation scheme to replace an existing design that posed constructability and safety concerns. Hatch met this challenge with a new design within a month.

One of the keys to the success of the new concept was the application of advanced hydrotechnical principles, which demonstrated the earlier design’s 10 inflatable gates could be replaced with a simple passive, stepped overflow weir immediately downstream of the existing spillway. Hatch’s solution eliminated constructability and safety concerns associated with the original design.

Advanced computational fluid dynamics (CFD) analyses were also performed to verify the ogee-shaped weir’s discharge capacity and energy dissipation step heights, so as to better suit the contractor’s preference for formwork that further reduced costs and improved the schedule.

The design was also specifically tailored to ensure there would be no interruption to power generation, ensuring reliable delivery to the community and revenue to the owner, Nalcor.

The resulting design met all current dam safety requirements, was significantly less expensive than the original design, provided the required discharge capacity, had virtually no environmental impacts, eliminated construction safety issues associated with the original design, allowed the work to be completed in one construction season and reduced future operational and maintenance costs.

First of its kind

The original concept’s complicated and expensive cofferdam design was replaced by a first-of-its-kind flashboard cofferdam that would be installed in less than a week, require no in-water work, cause almost no leakage throughout construction activities and reduce stress on the environment during efficient removal.

The team also collaborated to develop a formless concrete placement technique for the ogee-shaped weir. This too helped reduce costs and improve the schedule.

Some significant challenges were addressed during construction.

First, when the bedrock foundation was exposed, it was found to be composed of high-quality but highly irregular granitic rock. The original roller-compacted concrete concept had to be changed to conventional concrete, with a new redesign, specifications and drawings fast-tracked in weeks to address the complexities of the irregularities. Throughout construction, ongoing assessments and adjustments were made to ensure the dam’s base width met design requirements as the actual foundation was exposed.

Seepage through the dam was found to be much greater than originally thought, with exceptionally highly concentrated flows through eroded areas and lift joins that precluded effective concrete placement. It was not feasible to seal the leakage without lowering the head pond, which would have (a) reduced power generation significantly and (b) delayed the project for new environmental approvals.

The solution involved an innovative ‘plumbing’ system within the body of the dam to collect seepage water at its source, control it during concrete placement and discharge it at the toe of the dam. This cost-effective measure had no effect on the project schedule and enhanced stability by reducing seepage pressures at the interface between the existing and new spillway.

Prior to Hatch’s involvement in the project, one of the 10 inflatable gates had been installed. The operation of this gate led to concerns its high flows could impact fish passage during the spawning season.

To address this issue, Hatch developed a model of the fishway and undertook CFD modelling to determine if any remedial works were required to protect the salmon fishery. The results of the analysis showed the observed high velocity and turbulent flows only occurred near the water’s surface, compared to those at depth along the riverbed before the gate’s installation.

As such, the team concluded the inflatable gate had improved the potential for fish passage and there was no need for remedial measures. Ongoing monitoring has confirmed this conclusion. 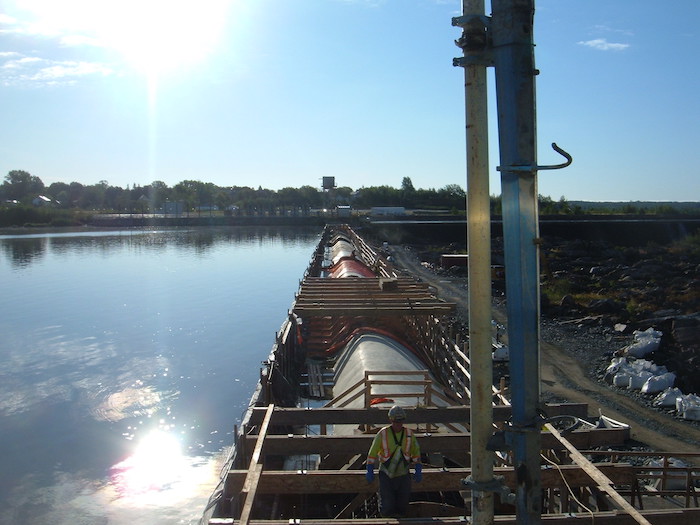 The team developed a formless concrete placement technique for the ogee-shaped weir.