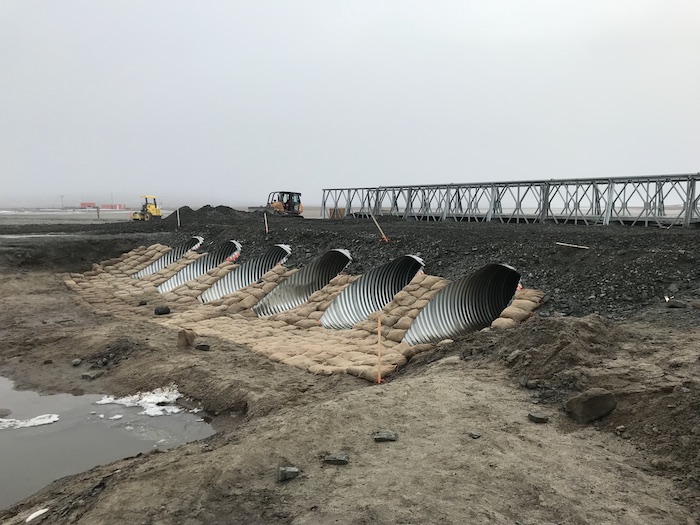 Mould Bay is a former high Arctic weather station (HAWS) on the Northwest Territories’ Prince Patrick Island, one of the least accessible locations in Canada. Environment and Climate Change Canada, as the owner, and Public Services and Procurement Canada (PSPC), as the client, retained Englobe to manage the reconstruction of a causeway over Station Creek that connects the station to an airstrip.

The goal was to complete the project work before 2020, at which point the client could proceed to the next phase of an environmental assessment and the possible rehabilitation of the site. Key objectives included protecting local flora and fauna and promoting the participation of Inuvialuit communities in the procurement and implementation stages.

The greatest challenges were related to site access and logistics for the construction equipment and machinery required to complete the work (culverts, excavator, floatable dams, vehicles, etc.). Six different types of aircraft, including a Lockheed C-130 Hercules, were used to transport equipment to the site.

Careful planning was required to co-ordinate flights, loading and unloading. Given the volume and weight restrictions of the different types of aircraft, for example, some specialized equipment had to be procured, including an all-terrain vehicle (ATV) brought in from Germany.

A delay in the initial mobilization, associated with unfavourable weather and the unavailability of some carriers, made Englobe miss an opportunity to position equipment and machinery using an ice bridge over the 30-m wide creek. The team was forced to re-evaluate its plan, although this did not affect the schedule. Rather than rely on conditions for an ice bridge, the team recommended mobilizing and installing a pre-engineered modular bridge.

The bridge system would need to be transported by air, but ideally not require the use of the C-130 Hercules cargo aircraft, which would significantly increase project costs. It was also important to mobilize before the airstrip itself thawed. This meant finding a bridge that met all the criteria and transporting it to the site within two weeks.

Through proactive project management, the team identified a bridge that met these needs. Detailed engineering and client approval of shop drawings were completed in just 11 days.

A Mabey Compact 200 modular bridge was transported using four flights of a Lockheed L-188 Electra aircraft and installed on schedule, with the equipment in place.

The 50 years of operation of the HAWS, from 1948 to 1997, had a significant environmental impact. The site is contaminated with hydrocarbons, heavy metals and polychlorinated biphenyls (PCBs), among other contaminants. The station’s buildings also contain hazardous materials like asbestos and lead paint.

Upgrading the access road is an important milestone towards the eventual environmental remediation of the site. Measures were put in place to avoid the dispersion of sediment during work near any watercourse. Filters were used to protect fish during the pumping work to dry out the work area.

To prevent oil spills, response kits were strategically positioned at the site, while barrels and other containers were stored in watertight basins. In addition, to avoid cross-contamination, previously identified contaminated areas were marked out to prevent any traffic over them. All waste generated by the project was transported and disposed of outside the site.

A total of 18 employees joined from the neighbouring communities of Kugluktuk and Ulukhaktok, representing approximately 30% of the workforce. Over the course of the project, they were actively involved in health and safety initiatives and a mentoring approach that enabled the transfer of knowledge.

Approximately $250,000 was invested into local Inuvialuit companies to support operations. Overall, approximately $4.1 million was injected into the economy, including $3 million to local airline companies. At the end of the project, remaining equipment and consumables were demobilized in the community of Inuvik.

Public consultations were carried out in Sachs Harbour, Ulukhaktok and Inuvik regarding the next steps for the eventual remediation of the site. These meetings presented employment and economic spinoff opportunities. 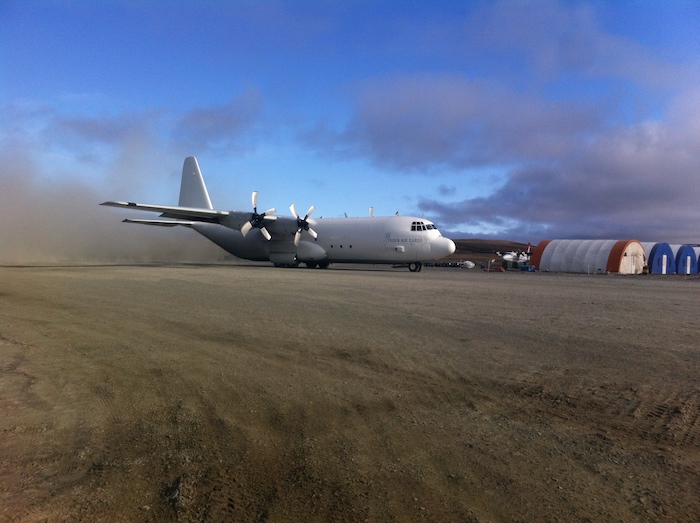 Six different types of aircraft, including a Lockheed C-130 Hercules, were used to transport equipment to the site.