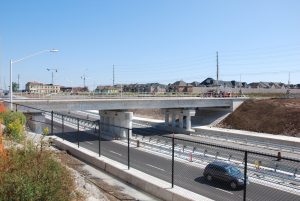 Consulting engineers, architects and contractors gathered for the 2016 Ontario Concrete Awards dinner on November 30 to celebrate the success of their joint efforts. The event was held at the Metro Toronto Convention Centre downtown in conjunction with Construct Canada.

The awards recognize design and construction innovation and excellence using the industry’s most ubiquitous material, and in a variety of different building types and applications.

A member of each winning team was able to give a brief overview of their project when accepting their award.

The winner in the infrastructure category was the Derry Road/CN Grade Separation project for Halton Region, northwest of Toronto.  Emcee for the evening, Clive Thurston, president of the Ontario Contractors Association, had nothing but praise for the project (he said he lives nearby and watched it unfold). It included a long overpass with a cast-in-place deck and precast arches, on a site webbed with highways, rail lines and a transformer station. It also has a huge on site stormwater management component. The team included R.V. Anderson Associates as engineers and New-Alliance as contractors.

The Institutional Building award went to the Reactor Materials and Testing Laboratory at Queen’s University in Kingston. The building stimulates the conditions inside a nuclear reactor, so requires a “bunker” type structure with concrete walls 6 ft. thick, reinforced with fibreglass rebar. The concrete absorbs neutrons and dissipates the energy. Read Jones Christoffersen were the engineers, Diamond Schmitt/Shoalts & Zaback were the architects, and T.A. Andre & Sons was the general contractor. 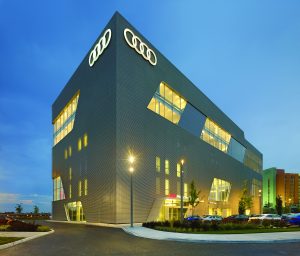 For Structural Design Innovation the award went to the Audi Midtown Toronto building, located near the busy Highway 401/404 interchange in the city’s northeast. The striking monolithic structure has sales on its lower levels, offices on the third level, vehicle service bays on the fourth, and parking on the three floors above. Stacking the different occupancies on top of each other created design challenges, with the sales areas needing large and open column-free spaces, whereas the service areas and parking above required bays. This mixture required many transfer columns and complex detailing.  The team included Read Jones Christoffersen engineers, Teeple Architects, and Eastern Construction.

For a Mid-to-High Rise Residential Building, the award went to The Onyx at the Barrel Yards in Waterloo. Consisting of two 22-storey point towers, the project evolved from conventional construction into a precast concrete structure that was constructed five months ahead of schedule.  The closely collaborating team involved HGS as consulting engineers, Turner Fleischer Architects, and contractor Stonerise Construction. Auburn Development are the owners. 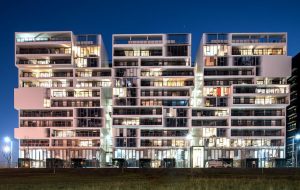 The Sustainable Concrete Construction category award went to the W. Ross MacDonald School Senior Student Residence for the Blind and Deaf-Blind. Located in Brantford, west of Toronto, the reinforced cast-in-place concrete structure helps to reduce the noise and vibration for the sensitive students. Other features include specially designed straight corridor walls for wayfinding, a large atrium that acts as an acoustic wayfinding device and has cantilevers and sunshade overhangs.

Other winners in the program were:

Architectural Hardscape: Rouge Crest Park in Richmond Hill, north of Toronto. A waterpark with coloured concrete artforms was designed by a the team of Engineering Link, Scholl & Company architects, with Rutherford Contracting.