Net Zero Energy Buildings will be the standard by 2030

Presenters at the Construct Canada conference on December 1 show how buildings must be retrofitted to achieve carbon neutrality.

A session at the Buildings Show/Construct Canada in Toronto last week was on our progress so far in achieving that holy grail of building design: “Zero Net Energy.”

Trevor Nightingale, program leader of high performance buildings at the National Research Council in Ottawa, gave several Canadian examples of buildings that have achieved a very low energy use intensity (“ekW/m²/yr”, i.e. energy they use per square metre per year). However, so far no building in Canada has achieved actual zero, a fact which Nightingale attributes to Canada’s climatic disadvantage. By comparison the U.S. already has 160 net zero energy buildings.

Being zero net energy means a building consumes no more energy than is produced on the site, which also means the building is “carbon neutral” and doesn’t contribute to greenhouse gas emissions and climate change.

Nightingale explained that in order for Canada to meet its GHG emission reduction goals it is not enough for new buildings to be super energy efficient; we also have to retrofit the existing stock. The first net zero energy retrofit project that his NRC group has worked on is the Ontario Association of Architects’ headquarters in north Toronto.

His fellow presenter was Sheena Sharp who is on the committee leading the OAA building retrofit project, and also a principal of Coolearth Architecture. Sharp explained that the OAA had adopted the 2030 Challenge, an international commitment by architecture and engineering companies that sets a standard for reducing buildings’ fossil fuel consumption over the next decades. The ultimate goal is for buildings to be carbon neutral by 2030.

Sharp pointed out that according to estimates by the UN Intergovernmental Panel on Climate Change, if the world carries on with business-as-usual we will see greenhouse gas emissions raising global temperatures by 5% by the end of this century. To reduce the energy consumption of buildings is important not only because they are large greenhouse gas emitters, but because the buildings we design today will still be around in 2050. Today’s cars and vehicles, by contrast, will be defunct in a few years. 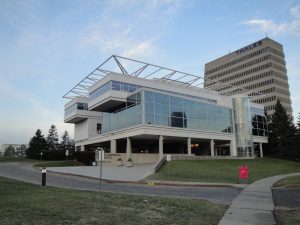 Sharp explained that the OAA had decided to adopt “the true believer” road for retrofitting their headquarters, partly because it would serve as an educational example.

The building, constructed in the 1990s, is a largely glass rectangle, raised “on stilts” above a floodplain. Because it is elevated above ground it has six exposed sides, one of several energy “liabilities.” It also has expansive glass curtain wall, a steel structure and lots of thermal bridges. “Are you crazy?” is what many ask Sharp when hearing the program’s ambitious energy saving goals.

However, the building also has assets: lots of daylighting, a 40/60 window-wall ratio on its east and west sides, and a tight envelope. Most fortunately and presciently, it was built with a raised structure on the roof that was intended to carry shading devices. The devices were never installed, but in the renovation the roof structure will be used to support photovoltaic and solar thermal shading devices.

The OAA’s plans also include replacing the aging, inefficient HVAC system.  They intend to add displacement ventilation using the atrium, and either a ground source heat pump system or an “ice tank” heat exchanger. They are hoping to take the “keep it simple” approach, Sharp said.

Other plans include upgrading the windows (except the feature curved glass entry), and replacing a lighting system that currently operates on four switches, with a sensor system and LED lights.

The renovations are budgeted at $3.8 million. Taking into account rising electricity costs and a pending carbon tax, they expect the payback to be around four years. David Fujiwara is the project’s architect, and WSP and Sheffield are engineers. The NRC is attending all design meetings, will test technologies in their labs if required, and will help monitor the building’s performance after the renovations are completed in 2018.

Canadian buildings that are almost there
Nightingale summarized a half dozen buildings designed in the past decade or so that have achieved dramatic energy savings. They are the Varennes Library in Quebec (53 kWh/m²/yr),

Mosaic Centre, an office building in Edmonton (67 kWh/m²/yr), Centre for Interactive Research on Sustainability (CIRS) at the University of B.C. (131 kWh/m²/yr),

Promise and Reality: Centre for Interactive Research on Sustainability, University of British Columbia

He noted that while buildings’ space conditioning energy can be reduced with technologies we have today, the plug loads in buildings stay relatively constant.

As “take-aways” Nightingale listed a few features in the above buildings that helped them achieve their extreme energy efficiency:

–  a low, squat building form with a large roof area

–  all the buildings have ground-source heat pump systems.

– all the buildings have photovoltaic panels producing electricity, and many had a solar thermal boost

– all use natural daylight as much as possible.

He did note that the costs of the above buildings were often relatively high, and he warned that sometimes the payback on equipment can outlast its service life, “so you have to be careful.”

Also critical, he said, is commissioning, and having a building energy management system working in consort with a building automation system in order to monitor and control the ongoing building performance. Not least, he said, it’s important to carry out occupant surveys both before and after the retrofit, since staff represent 82% of an organization’s efficiency.

For more information about the OAA building renovation, click here