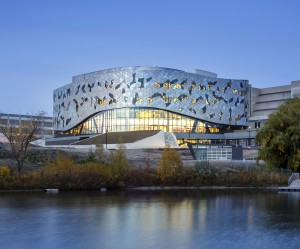 The new engineering building at York University in Toronto won the top honours for architectural merit in the Ontario Concrete Awards. The Bergeron Centre for Engineering Excellence is home to the Lassonde School of Engineering. ZAS Architects were the designer. Arup did the civil, structural, mechanical, electrical, information technology and security engineering, as well as providing initial engineering advice for the unusual glass and metal facade. The 15,744-sq.m building includes a triple-height civil engineering lab which is structurally isolated from the remainder of the building to minimize the transfer of noise and vibrations. The building was Canadian Consulting Engineer’s cover feature in January 2015.

The Toronto Pan Am Sports Centre at the University of Toronto Scarborough Campus won in the institutional building category. NORR was the architect and Parsons Brinckerhoff Halsall were the engineers. (It was featured in CCE, August-September 2015, page 19.)

The Saginaw Gardens Apartments won an award in the mid-to-high rise residential building category. ABA were the architects and MTE were the engineers.

The Billy Bishop Airport Pedestrian Tunnel done for Ports Toronto won the structural design innovation award. Arup was the engineer of record and exp Services were the geotechnical engineers.

In the infrastructure category the winner was the Spragues Road Rehabilitation for the Region of Waterloo. The concrete pavement design was by Applied Research Associates, and involved preserving the existing concrete base and adding an unbonded concrete overlay.

Other awards went to the following: