The winning projects in the 2013 Ontario Concrete Awards showed engineering ingenuity at its best in diverse types of projects. 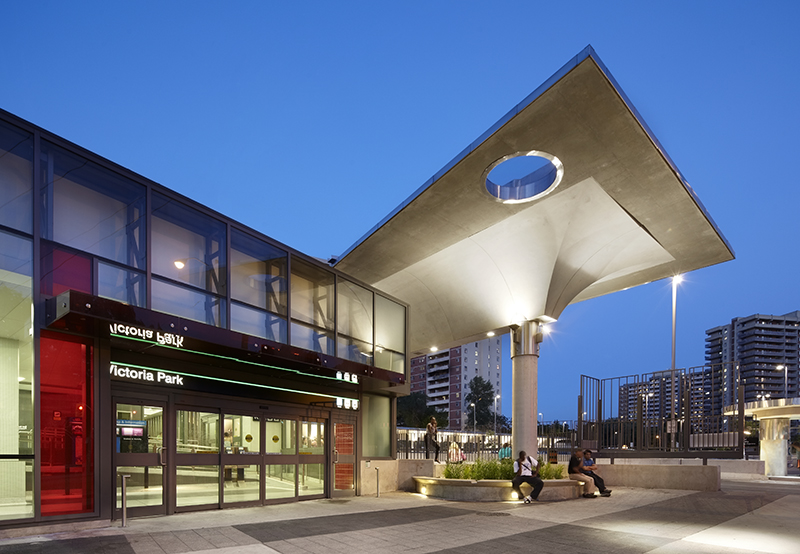 TTC Victoria Park Subway Station, Toronto. One of the 2013 Ontario Concrete Association Award-winners, it was completed in 2011. Photograph: Shai Gill.

The winning projects in the 2013 Ontario Concrete Awards showed engineering ingenuity at its best in diverse types of projects.

In the building-related categories, two projects by Halsall structural engineers were winners. The Victoria Park Terminal Bus replacement in Toronto won in the architectural merit category, with Halsall as structural engineers and IBI Group and TTC ECE Design as architects. The $36-million redevelopment of the existing subway station on the Danforth line includes three new entrances and a 5,000-sq.m green roof over the concourse and subway plantform levels.  In the institutional buildings category, the University of Windsor, Centre for Engineering Innovation, won. Its team included Halsall Associates and B + H Architects.

The winner in the infrastructure categories was the Region of Halton Zone 3 Interconnecting Water Main in Oakville, with R.V. Anderson Associates as the engineer of record. The structure, built to convey water over a deep valley between Burlington and Oakville, made use of four existing piers. The piers date from 1918 and originally supported a highway.

Hatch Mott MacDonald were engineers for the Hodder Avenue Underpass near Thunder Bay, which won in two categories, for structural design innovation, and material development innovation, both in precast. The bridge incorporates ultra-high-performance concrete in its field-cast connections as well as its precast elements (see CSCE’s CIVIL magazine, Winter 2013, p. 12-13).

The Fairway Road Grand River Bridge in Waterloo, with MMM Group as engineer and DTAH as architects won in the structural design innovation, cast-in-place category.

Other winners were the Erindale Go Parking Structure in Mississauga, with Read Jones Christffersen as engineer and IBI Group as architect (specialty concrete applications); Art Condominiums, with Jablonsky, Ast and Partners as engineers, and Oleson Worland and Hariri Pontarini as architects (mid-to-high rise residential); and the Burlington Performing Arts Centre, with CH2M HILL as engineer and Diamond Schmitt as architects (sustainable concrete construction).

In the architectural hardscape category, the Lock Skate and BMX Park in Port Colborne won, with LANDinc as architect and Blackwell as structural engineers.

The awards were presented at the 2013 Ontario Concrete Awards Banquet held in Toronto on December 4.