On Oct. 1, the Garrison Crossing stainless steel bridge—reportedly the first of its kind in Canada—was officially opened in downtown Toronto. 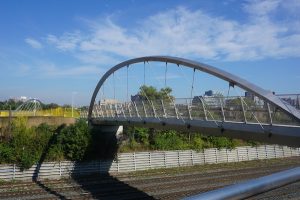 Pedelta, a consulting engineering firm specializing in bridges, worked with DTAH, an architectural firm, and other companies to design the project. Dufferin Construction was selected through a competitive evaluation process to build it, starting in late 2016.

Garrison Crossing is actually a two-bridge structure for pedestrian and cycle traffic, linking Toronto’s park system between Trinity Bellwoods Park in the north and the Fort York National Historic Site in the south, to offer new passage to the waterfront. 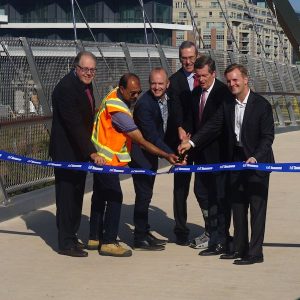 “This project shows the progress our city is making when we work together with the private sector to get things done for our residents,” said John Tory, Toronto’s mayor, who attended the bridge’s official opening. He was accompanied by two local councillors, Joe Cressy and Mike Layton, and representatives of Dufferin Construction and CreateTO, a municipal agency that delivers real estate services.

There will also be an official community celebration for the crossing later this month.