Fort York bridge to be first in duplex stainless steel 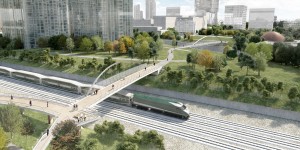 A new pedestrian and cycle bridge near the waterfront in Toronto will be the first in North America to have a structure built entirely of duplex stainless steel.

Duplex stainless steels have a two-phase microstructure consisting of roughly 50% austenite and 50% ferrite. The use of the material makes it possible to have a lighter structure as it is stronger than traditional materials. The material also has a higher resistance to corrosion and requires less maintenance.

The Fort York Pedestrian and Cycle Bridge project is actually a two-part structure, crossing over two railway crossings just east of Strachan Avenue west of downtown. The bridges connect new parks near the Gardiner Expressway, crossing at right-angles over the Georgetown and Lakeshore railway corridors. The northern bridge steps down on the grounds of historic Fort York.

The bridges are single span tied arches, the northern one 52 metres long, and the south one 49 metres. Their arches tilt in opposite directions, enhancing the notion of a single integrated crossing. A triangular cross-section for the arch and a trapezoidal cross-section for the tied-girder are being proposed to achieve a sharper, lighter definition, along with a slender plate and railings, adding to the overall elegant aesthetic. The bridges provide clear views to Toronto and its neighbourhoods without dominating the skyline.

A team led by Dufferin Construction Company won the contract to design and build the $19.7-million project, selected from three shortlisted teams who submitted proposals.

The lead designer is Pedelta, which developed the concept and is doing detailed design. DTAH are the landscape architects, Mulvey and Banani (MBII) are the electrical and lighting engineers, and Golder are the geotechnical and environmental engineers.

The client is the City of Toronto with Build Toronto, an independent corporation that the city formed five years ago to develop surplus and underused city land.

Toronto Councillor Mike Layton said at the announcement: “This major infrastructure project will not only create a new connection with great vantage points for the local neighbourhoods around King Street West, Liberty Village and Fort York, it will improve connections with the rest of the City.”