The steel frame for a pedestrian bridge across a downtown Toronto street was hoisted into place over a weekend... 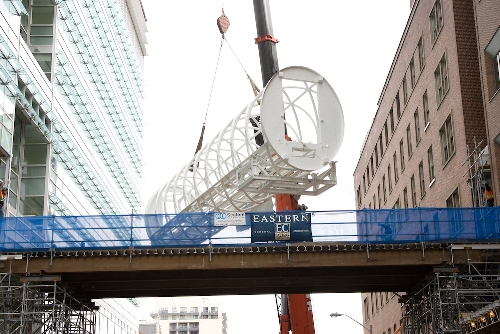 The steel frame for a pedestrian bridge across a downtown Toronto street was hoisted into place over a weekend on October 23. The tubular steel frame, about 18 metres long and 4 metres in diameter, was made in Germany and shipped across the Atlantic, then via New York to Toronto.
The bridge is across Shuter Street in the Queen and Yonge Street area. It connects St. Michael’s Hospital’s main building to its new research unit, the Li Ka Shing Knowledge Institute.
Workers are now installing 65 curved glass panels into the structure. Each pane of glass consists of three layers and is a curved parallelogram.
Diamond and Schmitt were the architects for the bridge; structural engineers Carruthers & Wallace/Trow were involved with the frame, and Halcrow Yolles is the structural engineer for the glass component. Eastern Construction is the general contractor.
Toronto has only a handful of enclosed pedestrian bridges crossing its streets. City officials usually deny permission for them.