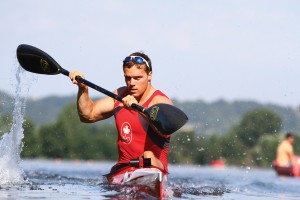 Stantec’s Mark de Jonge won gold at the Pan Am Games in Toronto on July 12. De Jonge, an engineer-in-training at the company’s office in Dartmouth, Nova Scota, came first in the K-1 200 metre kayak race. He and Pierre-Luc Poulin also earned a bronze in the men’s K-2 200 metre final, in a tie with Brazil. Stantec sponsors de Jonge, and accommodates his demanding training and travel schedule to enable him to compete in the sport. He won the world championship in the K-1 200 last year, and bronze at the London Olympics in 2012. De Jonge has been with Stantec since 2009. See CCE’s 2012 interview with him.

Hatch is doing design and development for the world’s largest new diamond project in northern Canada. The Gahcho Kué mine is located 280 kilometres northeast of Yellowknife in the Northwest Territories, and is the third diamond mine in Canada owned by De Beers. De Beers owns the mine jointly with Mountain Province Diamonds. Land access for transporting equipment to the site is only available for two months of the year, in February and March, by a 420-kilometre long ice road. Hatch began working on the project in 2010, did studies in 2013 with JDS Mining, and was awarded a full contract in January 2014 to implement the project. John Bryant is senior project manager with Hatch.

Riggs Engineering has been awarded the engineering contract for cleaning up Randle Reef in Hamilton Harbour. The reef is an area of contaminated sediment approximately 60 hectares in size, and considered one of the most challenging contaminated sites in the Great Lakes. The $140-million clean up includes constructing a 6-ha engineered containment facility to contain the most highly contaminated sediments, while lesser contaminated sediments will be capped in place. The project is being done in two stages, with McNally Construction for Stage 1, and Dean Construction for Stage 2, which involves reconstructing a harbour wall. Environment Canada is leading the clean-up, with PWGSC as the contracting authority.

Arup was lead engineer on the revitalization of Queen’s Quay, completed in time for the Pan Am Games in downtown Toronto. The work included creating an enlarged pedestrian promenade, a separated LRT right-of-way and new sections for the Martin Goodman Trail. Infrastructure was replaced or upgraded, including power, gas, water, sewage and telecommunication systems. Urban design was by West8 and DTAH.

Entuitive, structural engineers of Toronto, have launched a publication “Exploring Building Performance,” which summarizes results from a research study. The study identifies five global shifts and how there is a drive for high performance. To download a copy, visit www.entuitive.com