Nanoflotation technology uses membrane skins that encourage fouling and then are replaced. 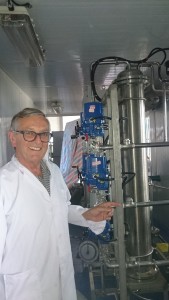 David Bromley with his pilot project.

David Bromley, P.Eng., president of David Bromley Engineering, invented the patented “Nanoflotation” technology, which promises to reduce the energy required to filter the process water by up to 65%. It could also reduce the use of chemicals required to treat the water by 86%. And it would allow oil sands operators to re-use all their water, thus ultimately reducing the size of tailings ponds and off site disposal.

The Nanoflotation technology underwent a year’s pilot testing at Canadian Natural Resources Canada. With the SDTC grant it is now being developed in a larger commercial application by Bromley, along with PurLucid Treatment Solutions of Calgary and A.H. Lundberg Systems of Vancouver.

One of the problems with membrane technology is fouling, which slows down the filtration process and means the process needs more energy to push the water through. Consequently there has been a lot of research and effort to prevent fouling.

But Bromley turned the tables: “I thought to myself there’s an opportunity here to reverse the thinking and have a technology that actually uses the fouling to its benefit. And so instead, we have technology now that encourages fouling to occur.”

The technology increases the loading (“flux”) that the membrane filtration system can handle by tenfold. “In other words, instead of needing, say, 100 square metres of membrane area, we would need only 10 square metres,” says Bromley. This reduces the cost of a treatment system dramatically.

The first stage of the system is a flotation cell, which can be dissolved air flotation (DAF), although the preference is to use froth flotation.

The second stage is the membrane filtration. The replaceable skin can be used with a polymer, or ceramic or stainless steel membrane substrate.

The pilot involved a “1-membrane” bundle, while the new commercial-scale plant being built now has 10 membrane bundles. They are hoping to have it in operation by the end of 2015. The demonstration project will use three oil sands wastewater streams: including, steam assistant gravity drainage (SAGD).

With pressure on oil sands operators to improve their environmental performance and reduce costs, Bromley explains how the oil sands could benefit: “There are two benefits that this technology provides. One is it allows the water in oil sands operations to be re-used. In fairness the oil and gas industry reuses a lot of their water already. But this will allow for a complete reuse of the water.”

“The other aspect, which I think is perhaps more applicable, is that this technology would certainly allow for these waters to be treated such that they could be discharged into the normal hydrological cycle i.e. back into a river.”

The technology treats a wide variation of colloidal solid concentrations and scaling parameters including silica, barium and strontium, as well as reducing organics. It could be used for treating municipal wastewater too, “but we have not tested that,” says Bromley.

Bromley licenses the nanoflotation technology in China as well.