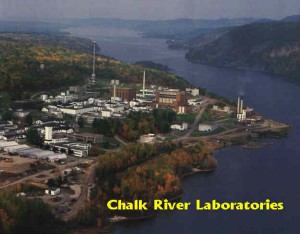 After a long and complex selection process Natural Resources Canada has made a decision about who will operate and manage Canadian Nuclear Laboratories (CNL). CNL is the non-generating subsidiary of Atomic Energy of Canada Limited.
On June 26, the government announced that Canadian National Energy Alliance (CNEA) is the preferred bidder. CNEA includes engineering companies: CH2M Canada, SNC-Lavalin and Fluor, as well as Energy Solutions and Rolls-Royce.
Canadian Nuclear Laboratories is responsible for developing nuclear science and technologies, as well as producing medical isotopes and the decomissioning and managing of nuclear waste. Its facilities include the Chalk River Laboratories north of Pembroke, eastern Ontario, which employ about 3,300 people. CNL’s other main facilities are the Whiteshell Laboratories in Pinawa, Manitoba.
In a press release, Dr. Robert Walker, president and chief executive officer of CNL, expressed confidence in the private consortium’s abilities: “Canadian National Energy Alliance will bring private-sector rigour and efficiency to the management and operation of CNL.”
The contractual arrangements are being finalized by this fall. The CNEA consortium will act as the private sector contractor to deliver CNL’s three core missions:
– federal waste and decommissioning responsibilities;
– nuclear science and technology expertise in support of federal government needs; and
– science and technology and related services to third-parties on commercial terms.
The selection process began in March 2014 when the government issued a Request for Response Evaluation to assess whether prospective bidders could meet the technical, financial, integrity and national security requirements. The RFRE was designed with multiple “intake dates” to allow interested bidders to qualify at various stages. Then in January, the government issued a Request for Proposal to four prequalified consortia.
The three other three consortia that were shortlisted to bid on the contract were:
Canadian Nuclear Revitalization Partners (Bechtel, Hatch, Golder, General Atomics and Booz Allen Hamilton);
Innovation Canada Alliance (WorleyParsons, MacDonald Dettwiler, BWX Technologies, Cavendish Nuclear, Battelle Memorial Institute, Bubble Technology and the Boston Consulting Group); and
Northern Nuclear Laboratories Alliance (URS, Canadian Nuclear Partners, McMaster University).
CNEA received the highest score based on technical, risk and feasibility and financial factors. Third-party expert nuclear, financial and legal advisors were on hand for the bidding process and it was monitored by a Fairness Monitor. All the bidders were verified to ensure their compliance with Public Works and Government Service Canada’s integrity framework.
The decision to outsource the management and operation of the Canadian Laboratories is part of the government’s plan to restructure Atomic Energy of Canada Limited. In October 2011 the government sold the assets of AECL’s CANDU Reactor Division to Candu Energy, which is a wholly owned subsidiary of SNC-Lavalin Group. SNC-Lavalin has around 1,200 people worldwide involved in nuclear technology.