The Broadway Subway project with 5km of underground travel and the 10.5km Surrey LRT project will now move forward to the procurement stages. 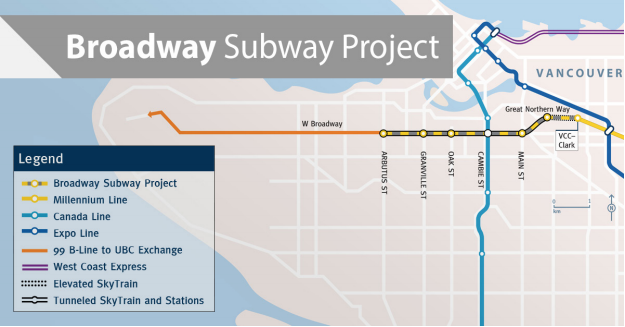 The Broadway Subway project, an extension of the Millennium Line, will add 5.7km and six stations, bringing SkyTrain access to one of the most congested transit corridors in Metro Vancouver. Along the new line 700m will be elevated and 5km will be tunneled.

Among the six underground stations, one will connect to the Canada Line. The Broadway Subway will be able to move 5,100 more passengers per hour/per direction than the existing bus service it will replace, increasing capacity by 250%. It will also be built to accommodate additional future capacity increases.

The Province will be using a design-build-finance model to build the Broadway Subway. The project will go to procurement this fall, and construction is anticipated to occur between 2020 and 2025.

The Surrey-Newton-Guildford Light Rail Transit project (LRT) will create the first light-rail transit system in British Columbia. With 11 new stations along 10.5km of street-level track, the LRT will travel across the Lower Mainland.

The LRT project, with an estimated cost of $1.65 billion, will be funded and delivered by Translink, with contributions from the Government of Canada ($483.8 million). TransLink will be using a design-build-vehicle supply-finance-operate-maintain-rehabilitate model to build and then operate the LRT for the first seven years.

The project is heading to procurement with construction expected to occur between 2020 and 2024.

In Surrey, the Light Rail Transit project will take people from one end of the line to the other in approximately 27 minutes. The line will operate within dedicated train-only lanes on the road.