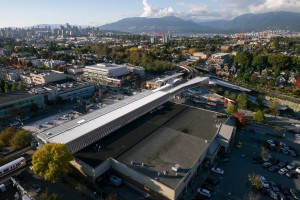 Artist’s rendering of upgrades to the Commercial-Broadway Station in Vancouver. Photo courtesy of Translink.

Construction has begun on major changes to the busiest station on the Metro Vancouver transportation system.

AECOM Canada is the architect, civil, structural and mechanical engineer for Translink’s upgrades to the Commercial-Broadway station.

Located just east of Commercial Drive in east Vancouver, the station lies at the intersection of the original Expo Line completed in 1985, which is elevated, and the Millennium Line completed in 2002, which is at grade. Part of the station is therefore elevated over East Broadway, while another part is much lower, south of Grandview Highway North. The two parts are connected via an elevator and skyway.

As a transfer station between these lines and also for the busy 99B rapid busway that goes to the University of B.C., the station handles 90,000 skytrain passengers as well as 60,000 bus passengers.

The latest upgrades are scheduled for completion in 2017 and include a new platform for westbound Expo Line trains and a new walkway over Broadway to connect to the Millennium Line platforms. There will also be new elevators, an expanded concourse and wider entrances.

Applied Engineering Solutions is the electrical engineer, H.H. Angus is the lighting engineer, and exp services is the geotechnical engineer.