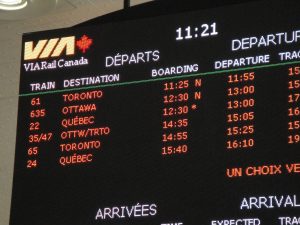 The federal government announced funding for upgrades to air, rail and transit projects in July.

On July 21 Marc Garneau, Minister of Transport, announced that the government would be investing $27.6 million on safety related improvements at 13 regional airports. Funded through Transport Canada, the projects inlcude the rehabilitation of runways, taxiways and aprons, as well as projects to improve airfield lighting and airside electrical systems.

The following day he announced $34.4 million to improve stations and maintenance facilities in the Windsor-Quebec City rail corridor. The funds will be used at VIA maintenance facilities in Montreal and Toronto for their mechanical and electrical systems, as well as water treatment systems. Their building roofs will also be replaced. At other stations along the corridor mechanical-electrical upgrades will be made, as well as platform improvements. And at Edmonton’s VIA station an additional $400,000 is being spent on a contaminated site.

On July 18 the federal government and the Government of B.C. jointly announced almost $160 million in funding for BC Transit projects. The money is partly for technologies for buses, such as closed-circuit TV, automated gates, and real-time passenger information, but there is also capital funding for a new transit exchange centre at the University of British Columbia’s Okanagan campus in Kelowna. Also new operations and maintenance facilities will be built in Prince George, Central Fraser Valley, Campbell River and Cowichan Valley to enable them to support compressed natural gas fuelling for the buses. There will also be seismic upgrades at transport facilities in Victoria and Langford.