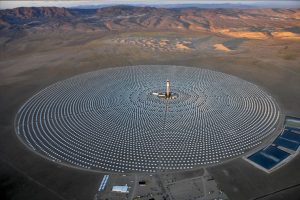 In these hot, dry days of summer a technology that creates and stores energy in the desert sounds appealing.

On July 14, Scientific American published an article extolling the merits of concentrated solar power technology as the answer to energy storage for renewable power.

Written by Knvul Sheikh, the article focuses on the Crescent Dunes 110-MW concentrated solar energy farm in the Nevada Desert, between Las Vegas and Reno. Crescent Dunes has 10,000 large mirrors called heliostats focusing the sun inward to a 195-metre high glowing white tower at the centre.

The reflected solar energy is used to heat up a tank full of sodium and potassium nitrates that are pumped up to the top of the tower. “There the molten salt can reach temperatures as high as 565 degrees Celsius,” Sheikh explains. “When electricity is needed, the hot salt is used to boil water and produce high-temperature, high-pressure steam, which turns turbines that generate electricity. The rest of the time, the molten salt can be stored in another insulated tank on the ground.”

The Nevada plant can store more than 10 hours of electricity, which makes it a good “battery” for assisting utilities to balance their loads.

The use of molten salt as a energy generator and storage medium eliminates the need for heat exchangers between different fluids. It is also efficient, cheaper and more environmentally friendly than oil, says the article. However, solar concentrator plants take up a lot of land, and they have to compete with their cousins, photovoltaic farms on price.

The Crescent Dunes development is owned by SolarReserve of Santa Monica, California. According to the article it is just one of several molten salt tower developments around the world but is six times bigger than a demonstration plant completed in 2011 in Spain. SolarReserve is planning to build another large plant in South Africa, and other companies are planning them in Morocco and Chile.

To read the article in Scientific American, click  here. 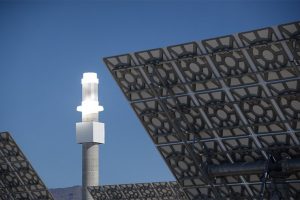