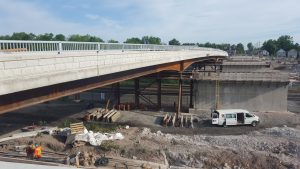 “Our goal has been to reduce the impact of construction during the Central Avenue Bridge replacement. We’ve applied an innovative rapid bridge replacement technique and sequenced construction beside the existing structure, minimizing shutdowns and reducing the effects on daily traffic.”

The bridge carries more than 10,000 vehicles a day over a major CN rail corridor. Hatch partnered with the Regional Municipality of Niagara on the project and worked closely with CN Rail and hydro utilities over the logistically complex construction project.