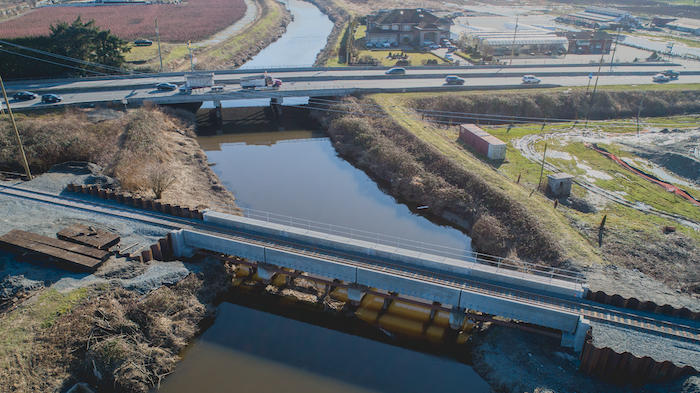 The municipal government of Surrey, B.C., announces the completion of the Serpentine Railway Bridge replacement project. It is the first of 13 project components to be partially supported by the federal government’s Disaster Mitigation and Adaptation Fund (DMAF).

The city secured $76.6 million from DMAF in 2019 to supplement the series of projects to reduce coastal flood risk and adapt to rising sea levels. The first project involved working with Southern Railway of British Columbia to replace the 58-year-old, 40-m timber railway bridge, which was vulnerable to overtopping and damage.

The railway, which moves approximately $190 million worth of freight across the bridge each year, contributed $1 million to the $3-million replacement. The city contributed $1.25 million and DMAF contributed the remaining $750,000.

“This new crossing acts as an insurance policy for the movement of goods and the protection of agriculture production in the area,” says Doug McCallum, Surrey’s mayor. “By investing in infrastructure now, we are protecting our community from future flood risks.”

The Serpentine and Nicomekl Flood Control Project began in 1997 to improve protection of agricultural lands. British Columbia’s provincial government has advised its municipalities to plan for 1 m of sea level rise by the year 2100 and 2 m by 2200.

The 12 additional components in Surrey to be supplemented by DMAF include dike and road upgrades, sea dam and bridge replacements and storm sewer upgrades, among others. They are to be completed by 2027.