The Delta highways project includes five major improvements to roadway structures and the construction of an additional 15-kilometres of highway and interchange ramps. 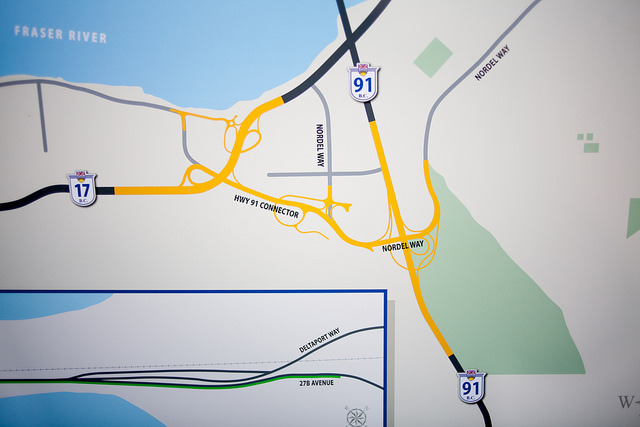 Federal, provincial and local governments together announced the funding for significant road work in the Delta region. The Delta highways project includes five major improvements to roadway structures and the construction of an additional 15-kilometres of highway and interchange ramps.

In a release announcing the funding, it’s noted that the improvements along three interconnected gateway corridors will benefit communities by reducing congestion and boost Asia-Pacific trade opportunities. Once completed, the upgrades will increase capacity, efficiency and safety as truck and passenger traffic is expected to grow along the trade corridors and Deltaport – the Port of Vancouver’s largest container terminal located at Roberts Bank in Delta.

Construction is expected to start in 2017 and to be completed by 2021, generating $194 million in economic benefit and an estimated 745 direct construction jobs over the course of the project.

Under the funding agreement, the governments of Canada and British Columbia, the Vancouver Fraser Port Authority, and the Tsawwassen First Nation are collectively contributing up to $245,176,671 towards the estimated costs of the Highway 91 to Highway 17 and Deltaport Way Corridor Improvement Project. Of this, the federal government will contribute up to a maximum of $81,671,139 for this project. The Government of British Columbia is contributing approximately $80,000,000. The Vancouver Fraser Port Authority is contributing $80,000,000 and the Tsawwassen First Nation is contributing $3,505,533.

The five projects include: