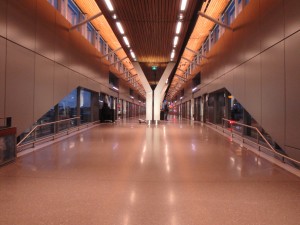 After Metrolinx, the Ontario agency overseeing transportation in the Greater Toronto and Hamilton Area, announced plans to lower the fares on the new train from Union Station to Pearson Airport, a scathing article appeared in the Globe and Mail.

The UPX has been running severely under capacity since it opened last year. The $27.50 one-way ticket per passenger did not make economic sense for most travellers, and certainly not for the airport workers. Pearson is the second largest employment zone in the country, with 300,000 people working in and around the hub.

After Metrolinx announced it would reduce the price to $9.00 one way, it is still out of reach for most workers, which means there is ongoing pressure to make it more in line with regular transit fares ($3.25 for TTC).

“[S]omehow, in a city desperately in need of more and better mass transit, the plan for the UPX was not focused on building a train to serve Torontonians, and not on carrying commuters. Instead it was about impressing occasional foreign visitors, particularly well-heeled ones. Metrolinx and the government somehow got it in their heads that what Toronto really needed was the Davos of trains.

“Franz from Frankfurt, partner in an international consulting firm who flies to Toronto once a year, arriving rested after a night in the business cabin’s lie-flat bed, was Metrolinx’s fantasy date; sorry fantasy passenger. They were a lot less interested in Sangeeta from Scarborough who works at the airport and commutes there and back 500 times a year….

“The UP Express even hired style guru Tyler Brûlé and his firm Winkreative to conjure up a look, feel and experience that, according to documents obtained last year by the Toronto Star, would ‘lure choice riders.’ There are greeters on the train and in the stations, sporting fashion-forward uniforms. The UPX has its own magazine, its own chief executive officer, layers of management, ‘executive quality seats’ — and fewer riders than the Toronto Transit Commission’s most underused bus routes.

“There seems to have been an obsession with everything but the bothersome subject of actual, local customers, who pay taxes, vote in elections and take public transit, or would if it were available.”

To read the full Globe and Mail article, click here.