Anyone travelling near Union Station at the foot of Bay Street in the downtown core of Toronto these days becomes entangled in a maze of construction hoardings and traffic diversions. 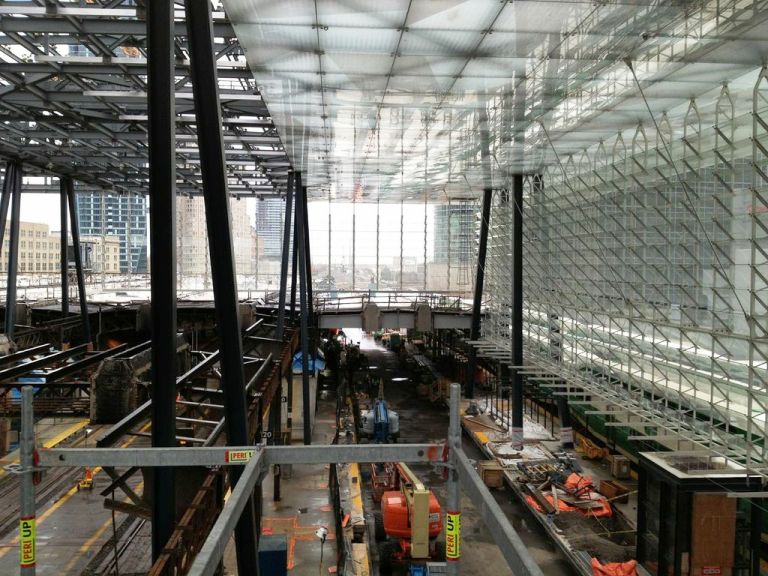 Anyone travelling near Union Station at the foot of Bay Street in the downtown core of Toronto these days becomes entangled in a maze of construction hoardings and traffic diversions.

What they’re up against is the $650-million revitalization of the busiest transportation hub in Canada in one of the most densely built up urban areas in the country.

At this geographic point three transport networks converge: first the iconic 1927 Beaux Arts Via railway station, destination point for cities across North America; second, the hectic commuter GO Transit station that carries workers from the downtown office towers to the towns and communities around the Greater Toronto Area; and third, the most southerly station on the Toronto Transit Commission’s subway train network. Altogether something like 65 million people pass through the Union Station complex every year, meaning it has twice the passenger traffic of Toronto’s Pearson International Airport.

With a massive program to dig below the station, expand the concourse, restore the Great Hall and rebuild the train shed, the engineers and architects are busy. On the evening of March 6, hundreds of people packed into the auditorium at the Ontario Science Centre to hear what they had to say.

Richard Coveduck, P.Eng. of the City of Toronto gave the overview then went into detail of how the concourse below the historic station is being expanded from 30,000 square feet to 110,000 square feet of high-end retail space. The only change on the exterior of the existing historically designated Grand Hall will be glass “moats” around the building to let daylight into the interior.

Hassan Saffarini, P.Eng. then provided fascinating technical details about the challenging structural engineering involved in the “Dig Down,” whereby they are excavating below the 1927 station’s foundations and a viaduct to create a second concourse. Saffarini, who is with NORR the architects and engineers for this part of the project, explained how they have to jack up the floor above, brace the columns and then slice them. Because of the historic importance of the buildings and concerns of Parks Canada they are continually monitoring any movement caused by the construction to within 0.33 mm accuracy.

Mario Nalli, P.Eng. of the TTC explained how they are adding a second platform to the south of the existing one at the Union Subway station to handle the increased passenger crowds.

But the highlight of the evening was when Peter Di Lullo, P.Eng. of Go Transit/Metrolinx explained how they are transforming the Union Station train shed, a 7-acre structure that covers the tracks and platform where passengers embark and disembark. The 1927 structure, though historically designated, is dark and low, and not a pleasant passenger experience. Its flat roof, though innovative in its day as a variation of the Bush design, is vastly different to the soaring glass arches that roof so many grand stations of the 19th century.

However, things are about to change: a high “glass jewel box” atrium is being inserted in the centre of the historic shed. This 71,000-sq.ft. glass atrium will be illuminated at night, visible from the offices and towers in the area. During the day it will be brightly daylit, surrounded by clear glass louvered walls that are suspended from the roof using steel tubes and cables. The walls will afford some shelter from rain and wind as well as being open to fresh air. A green roof will cover other portions of the roof, and the roofs will also support solar panels.

Yolles Partnership is the structural engineer and prime consultant for the Train Shed project (Di Lullo used to be a partner with the firm). The architect is Zeidler Partnership, mechanical-electrical engineer is Smith and Andersen, wind tunnel/CFD consultant is RWDI, heritage architect is ERA and contract administrator is RJC.

The works at Union Station are intended to be completed in time for the Toronto 2015 Pan/Parapan Games. By that time Union Station will also be the starting point for the new direct rail link to Pearson Airport, which means even more travellers will be passing through this revitalized zone.