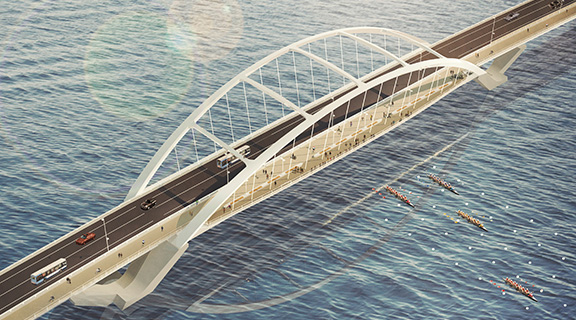 Rendering of Third Crossing in Kingston

The City of Kingston has selected Peter Kiewit Sons ULC (Kiewit), Hatch Ltd. (Hatch) and SYSTRA International Bridge Technologies (SYSTRA) as the preferred proponent for the detailed design and building of the Third Crossing bridge project.

“Today is another significant step in moving this project forward, said Mayor Bryan Paterson in a media release. “This is the largest infrastructure project our city will undertake for years to come.”

Kiewit, Hatch and SYSTRA were one of three shortlisted proponents to submit a proposal on the bridge project. Seven international teams initially applied for the job when requests for proposals were issued in February 2018.

“After a comprehensive and competitive procurement process, we’re happy that Kiewit, Hatch and SYSTRA are joining the Third Crossing project,” says Mark Van Buren, deputy commissioner and project director. “We started this process with seven exceptional international firms interested in coming to Kingston to work on this job and today we’ve selected the top proponent team. Having this collaborative team will ensure we build the best bridge possible for all residents while helping meet our long term transportation goals.”

The City has chosen an Integrated Project Delivery model (IPD) for this project. Similar to a design-build, the exception is that the City of Kingston, along with the contracted design and construction partners, will work within the defined $180M budget and share the risk and reward to deliver the bridge. The four teams develop shared goals and accept responsibilities as equal partners.

From September 2018 through to December 2019 the new project team will be doing early site preparation, conducting additional environmental and geotechnical investigations to inform the work with Parks Canada, and working through design validation.

Construction of the bridge is expected to begin in summer 2019. The project is being jointly funded by the Government of Canada, the Province of Ontario and the City of Kingston.

Once complete the new 1.2km bridge will extend over the Cataraqui River connecting the east side and west side communities. The new two-lane bridge will improve emergency services response, increase active transportation through a multi-use pedestrian and bike pathway, create business connections on the east and west sides of the river, and enhance the life of residents and visitors of Kingston meeting the highest engineering standards.

The new project team is looking forward to connecting with residents and hearing ideas about integrating the new bridge into the Kingston community.

Communication and engagement programs will be part of the bridge’s detailed design and construction phases later in 2018 and into 2019.

The team has also launched a City of Kingston Get Involved page and encourages residents to ask questions to the project team.

“Hatch is delighted to be involved in the largest ever infrastructure undertaking by the City of Kingston. We are looking forward to providing the very best of Hatch for this opportunity and hope to create something truly representative of this community,” said Philip Murray, global director, EPC and AFP, Hatch, in the media release.