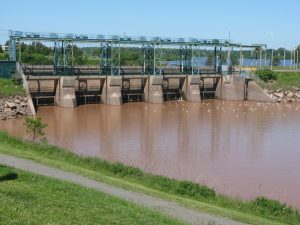 An important stage in the environmental restoration of the Petitcodiac River in New Brunswick was reached on December 16 when the federal and provincial governments announced funds to build a new bridge between Moncton and Riverview.

Since 1968 the two communities have been joined by a controversial causeway that was constructed to mitigate agricultural flooding. But the causeway ended up causing environmental damage. According to Wikipedia, the creation of the rock-and-earth fill structure resulted in an estimated 10 million cubic metres of silt being deposited downstream in the first three years after construction. Fish passage was hampered, and the area’s main tourist attraction—a tidal bore (wave) that once rose up to 2 metres and moved at up to 13 kilometres an hour along the river — was much reduced.

Environmental groups such as the Petiticodiac Riverkeepers campaigned to have the waterway rehabilitated and restored and, as a result, in 2010 the gates of the causeway were opened.  Since then the river has started to flush itself and the bore is rising.

On December 16 phase 3 of the Petitcodiac River Restoration Project was announced, with the federal and provincial governments announcing a $62-million program that involves building a new, higher 240-metre  steel girder bridge to replace the causeway. The existing aging river gate structures will be dismantled and the river channel will be aligned and widened. 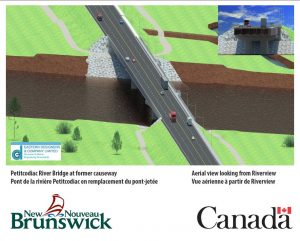 Rendering of the Petitcodiac River Bridge in Moncton, N.B.

According to the Government of Canada, the work will mean: “a safer, more reliable crossing for commuters and tourists, and a restored tidal flow that will greatly enhance eco-tourism and economic growth for the region.”

The Government of Canada is contributing $28.7 million and the province will provide the remaining $32.9 million.

At the announcement on December 16, Brian Gallant, Premier of New Brunswick, said: “Decades ago, some mistakes were made regarding the Petitcodiac bridge. The message today, as New Brunswickers we get to make things right for the environment for future generations. This investment will create jobs in the short term and help boost tourism in the New Brunswick. We have been talking about the restoration of the Petitcodiac River for as long as I can remember, by working together with the Trudeau government we are getting it done.”