It's an engineer's nightmare. Less than three weeks after it opened eight of its 10 lanes to traffic, the new Port Mann Bridge that connects Coquitlam with Surrey near Vancouver had to be closed for several hours on December 20 because it... 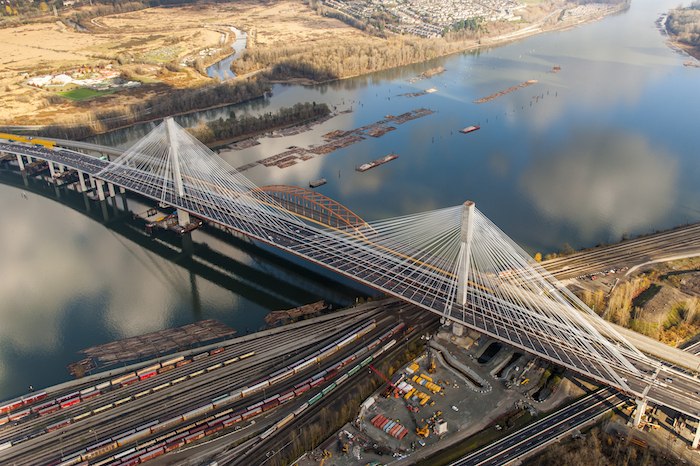 It’s an engineer’s nightmare. Less than three weeks after it opened eight of its 10 lanes to traffic, the new Port Mann Bridge that connects Coquitlam with Surrey near Vancouver had to be closed for several hours on December 20 because it presented a danger to the traffic using it. Cars and other vehicles were being pelted with ice falling from giant cables that rise over the roadway by up to 250 metres. Scores of cars were damaged and reportedly two people were hurt on the bridge as a result of falling ice.

At first, B.C.’s Minister of Transportation and Infrastructure, Mary Polak, was highly critical of those responsible for the project, saying that the falling ice and closure was “an intolerable situation” and suggesting the contractors of the $2.5-billion cable-stayed bridge should have anticipated such problems.

Then on Monday, the Ministry announced that engineers working with the contractor Kiewit-Flatiron have come up with a solution.

The solution has three components.  First the engineers are already testing a custom-designed cable sweeper that can be winched along the cables to brush and scrape off any ice before it accumulates. Shaped like snow plows, the sweepers  fit around the cables on caster wheels and travel approximately 61 metres a minute. They will be fitted on 152 of the 288 cables that cross the roadway.

The second solution is the use of hydrophobic (silicon based) coatings that could be applied to the existing cable sheaths to repel water, ice and snow. However, the engineers have to careful as the coatings could affect the aerodynamic response of the cable sheaths. The sheaths are ringed with a 1.6-mm raised lip that winds along the cables in a spiral and are designed to shed water. Tests are being done in a lab where a range of severe winter conditions can be created to assess the coatings’ suitability.

The use of a de-icing spray similar to those used on aircraft is the third solution being proposed. The government says that the Port Mann/Highway 1 engineers have found an environmentally friendly, non-corrosive de-icing solution.

The Port Mann Bridge will eventually have 10 lanes of traffic. At 65 metres it is said to be the widest bridge in the world. At 2 kilometres long in total length. it is also currently the second longest cable-stayed bridge in North America. Built as part of B.C.’s Gateway Project, a massive scheme of transportation expansion, the bridge replaces a 1964 structure.