As the transportation network of Vancouver continues to be transformed, the metropolis is seeing another new crossi...

May 14, 2009
by Canadian Consulting Engineer 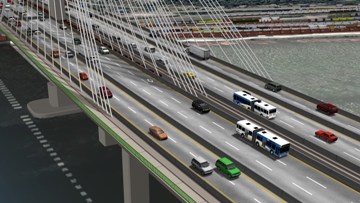 As the transportation network of Vancouver continues to be transformed, the metropolis is seeing another new crossing take shape. Construction is under way on the new Port Mann Bridge, set eventually to replace the traffic-snarled 1964 structure across the Fraser River between Coquitlam and Surrey, in the commuter belt east of Vancouver.

T.Y. Lin International of San Francisco the design engineer for the new crossing, which is being done as a design-build public-private partnership with Connect BC Development Group.

Originally the plan was to twin the existing bridge, but in February the B.C. government announced that instead it had approved a new span with 10 lanes, including a rapid bus lane and possibly a light rail line.

The project, part of the province’s Gateway Program, includes some major ancillary work. These projects include widening Highway 1, upgrading interchanges and improving access roads. The total crossing over the river is more than 2 kilometres.

Once the new bridge is completed in 2012, the older structure, is to be removed. It was designed by CBA engineering as a steel tied arch bridge with an orthotropic deck to carry four lanes. In 2001 it was widened with an extra lane from a design by Buckland and Taylor and now carries an estimated 127,000 vehicles a day.

The decision to replace the original bridge rather than twin it was reportedly because the P3 consortium did not want to pour money into maintaining the ageing structure.

The new bridge is estimated to cost $2.46 billion, but with operating and maintenance costs the price rises to $3.3 billion. It will be funded partly by user tolls, but initially the government is providing $1.15 billion as a repayable loan to the developing consortium.

The Connect BC group includes Pieter Kiewit Sons, Flatiron Constructors, and the MacQuairie Group and Transtoll Inc. The MacQuairie Group services 30 toll roads around the world, including the Sea-to-Sky Highway Improvement project in B.C.