Arup, Dissing + Weitling, and Provencher Roy Associés Architects have revealed the design of a new bridge across the St. Lawrence River in Montreal to replace the Champlain Bridge. The 3-kilometre crossing will connect the South Shore to... 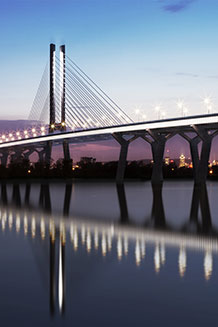 Arup, Dissing + Weitling, and Provencher Roy Associés Architects have revealed the design of a new bridge across the St. Lawrence River in Montreal to replace the Champlain Bridge. The 3-kilometre crossing will connect the South Shore to Montreal and is being built by the federal government. Arup is the technical advisor and engineer on the project, and Groupe SM is engineer for highway components.

The bridge design shows a curved alignment, sculptural piers and a feature “harp” of cables and tower. The design is flexible to allow either buses or light rail on a central corridor, as well as traffic, walkways, etc.. The structure is being designed for 125-year life.

SNC-Lavalin has been awarded a contract by Manitoba Hydro to design and build the Keewatinoow 230-kV AC Switchyard. The switchyard is located 775 kilometres northeast of Winnipeg and will transfer power from the Nelson River’s northern generating station south via the future Bipole III HVDC transmission line. The $112-million Keewatinoow project consists of a nine-bay switchyard, including the apparatus and controls. SNC-Lavalin will do design, procurement, construction, and pre-commissioning. Early groundwork has begun, with substantial completion scheduled for 2017.

AMEC has been named the owner’s engineer for a new nuclear power plant in Poland. AMEC was hired by state-controlled PGE Polska Grupa Energetyczna SA for the new plant which will either be located in Choczewo or Zarnowiec, both close to the Baltic coast. It will be built over the next 10 years.

Hatch Mott MacDonald was selected for a second consecutive term by the New York City Department of Homeless Services to do renovations to residential shelters in Manhattan and the Bronx. The five-year contract with a value of $2-million will include assessing the existing building conditions in the shelters and ensuring they comply with requirements.