Transportation infrastructure was in special focus when the Canadian Council for Public-Private Partnerships (CCPPP) held its 27th annual conference earlier this week at the Sheraton Centre Toronto hotel. 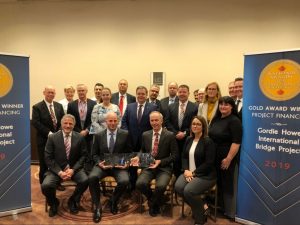 The planned international bridge, which will be the longest cable-stayed crossing in North America and the first major trade link between Canada and the U.S. in 40 years (joining Windsor, Ont., and Detroit, Mich.), is the first Canadian P3 to use a non-traditional foreign exchange risk framework to balance fluctuating currency prices. Fluor, ACS Infrastructure Canada and Aecon Group form the partnership that is building it.

The gravel highway, meanwhile, which will connect the remote northern community of Whati, is among the first P3s in North America in which an Indigenous government has a cash-funded equity stake. Constructed above permafrost, the road also involves a climate change risk-sharing model for long-term operations and maintenance (O&M).

“Congratulations to the winners of this year’s awards,” said Mark Romoff, CCPPP’s president and CEO. “It’s so exciting to see there are still new says the public and private sectors and Indigenous communities can work together to find innovative and sustainable approaches to developing, financing and maintaining infrastructure.”

Also on the conference’s first day, a breakout session discussed the challenges of developing large-scale urban transit projects, particularly when new expansions need to integrate seamlessly with decades-old systems. By way of example, a ‘market sounding’ showcased Edmonton’s proposed 27-km Valley Line West (VLW) light-rail transit (LRT) extension, which has returned to the P3 market after a pause, during which design changes were made to the original concept.

The conference’s second day began with Ontario’s premier, Doug Ford, and minister of infrastructure, Laurie Scott, using a keynote address to thank the P3 community for earlier feedback that is now informing the province’s unsolicited proposal (USP) framework and, in particular, Metrolinx’s $28.5-billion transit expansion plan for Toronto and its neighbouring suburbs.

Meanwhile, Hyperloop Transportation Technologies (HyperloopTT) co-founder and chair Dirk Ahlborn discussed his company’s plans to transport passengers and cargo at just below the speed of sound, by using passive magnetic-levitation (maglev) ‘capsules’ (example pictured) in systems of low-pressure tubes, with an estimated average cost of $20 to $30 million per km and the promise of profitability through energy generation. 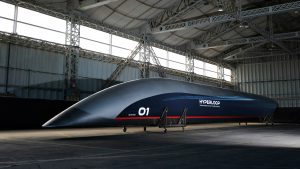 While such technology has yet to be commercially deployed anywhere in the world, a third-party engineering firm—Hamilton-based Transportation Economics & Management Systems (TEMS)—recently helped conduct a Hyperloop feasibility study for a ‘Great Lakes’ network that would connect Cleveland, Ohio, Chicago, Ill., and Pittsburgh, Penn. The study concluded the operational costs would require no subsidies and travel times would be reduced from hours to minutes. Suggesting such a network could be extended across the border to Toronto, Ahlborn encouraged conference attendees to check out the full study when it is made public on Dec. 17.

Finally, a more immediate transportation challenge was showcased in a market sounding for the Montreal Port Authority’s (MPA’s) Contrecœur Container Terminal Project, which is supported by the Canada Infrastructure Bank (CIB) and Transport Canada as strategic infrastructure for international trade. Arup Group is the project’s engineering firm.

Montreal’s existing port, an essential supply-chain link for both Quebec and Ontario, is rapidly reaching capacity, with railway connections posing bottlenecks. The new terminal, some 40 km downstream from Montreal, could accommodate more than one million containers per year. Expected to cost between $750 and $950 million, it would include a 675-m dock for two berths, a seven-track classification yard, a container storage and handling area, an intermodal railyard, support facilities, rail and road accesses, a truck control area and a viaduct on Route 132.

“We already offer shipping companies the shortest average dwell times in North America, at 1.8 days, but new capacity is needed now,” explained Ryan Dermody, MPA’s vice-president (VP) for Contrecœur. “A full geotechnical campaign will be done in a month and procurement is planned for the second quarter (Q2) of 2020.”

Certainly, in the new year, Canadians will see if these projects and others can stay ‘on track.’