Jury Comments: “This project showed an innovative use of seawater in a geo-exchange system. It reduced the use of energy by 35 per cent, and helped to create a sustainable and healthy work environment. The approach was also respectful of the historical surroundings.” 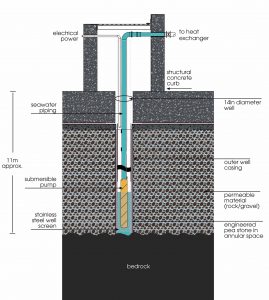 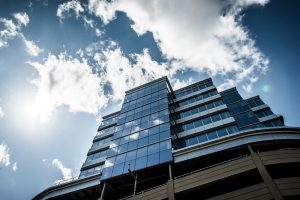 East Port Properties’ goal in building 351 Water Street in downtown St. John’s was to create a facility that was innovative, sustainable, healthy to work in, and respectful of its surroundings. It is the first building in Newfoundland and Labrador to be heated and cooled using seawater.
As prime consultant, Stantec designed the building and its mechanical-electrical systems. It consists of a 168,000-sq.ft., six-storey LEED-registered office tower standing above a six-level parkade and prime retail and commercial space.
The building uses the renewable energy source at its doorstep — the St. John’s Harbour — for heating and cooling. It extracts and discharges energy from the harbour seawater, resulting in 35% less energy usage than a conventional building of equivalent size.
Designing the seawater heating and cooling system posed a unique challenge for Stantec. The building sits approximately 20 metres from the harbour. The land between is crowded with infrastructure, which meant it was not possible to use conventional intake and discharge structures.
The building also sits on low lying, manmade land that consists of highly permeable geological material and fill. Seawater permeates the underground soils below the building, which led Stantec to investigate whether it were possible to extract or discharge the energy from this underground seawater.
The team’s search of the literature found no examples of a similar energy interface, so Stantec completed hydrogeological testing to confirm that vertically drilled water wells could produce the required volume of water from the soils below the building. The results from a test well confirmed the suitability of the site for the unique open loop system concept and the design proceeded as below.

Unique open loop concept and system
Depending on the season the HVAC system’s heat recovery chiller absorbs or rejects heat to the harbour through heat exchange with three seawater wells.
Stainless steel torpedo pumps and piping are used in the geo-exchange system to limit corrosion of the system in the high saline conditions. An innovative process for raw water filtration reduces the suspended solids and improves the energy exchanger performance. The team drilled a hole about 11 metres deep with a casing, inserted a smaller pipe with a well screen and filled the annular space with an engineered pea stone. The system tests positively to 500 U.S. GPM and the water is very clear. Two wide mouth plate and frame heat exchangers isolate the chiller/heat pump water from the raw water. The system is charged with 35% propylene glycol.
The system is extremely cost-effective based on life cycle costs, and it requires a relatively minor addition of infrastructure beyond conventional systems.