The future of acoustical provisions in the NBCC

Fundamental changes could come in 2025. 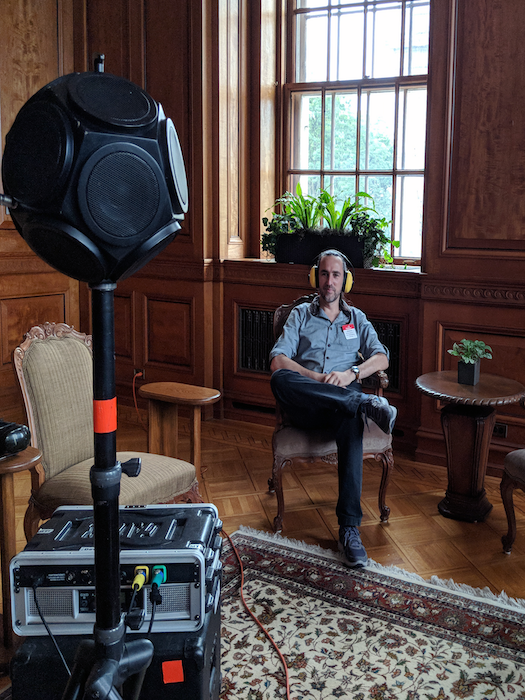 The progression of the National Building Code of Canada (NBCC) from 1941 through to the most recently adopted version in 2015 shows a steady evolution of the acoustical requirements for residential dwellings. From the earliest point, a minimum of sound transmission loss performance was stipulated as a means to limit intrusive noise between dwellings. Further investigation is underway today, through the Canadian Commission on Building and Fire Codes (CCBFC), to determine if and when further additions to and refinements of the NBCC are favoured, which could occur with the next expected publication in 2025. Given the deliberative nature of the process, some or none of the contemplated changes could be incorporated at that time.

As the CCBFC reviews potential further changes to the NBCC, there are a number of topics of interest with regard to acoustics. For one, changes are being considered for impact insulation class (IIC), in terms of making performance testing mandatory. Another topic that has been considered involves controls over the construction of exterior façades a topic area that would reduce the intrusion of noise from outside. And a further area of interest involves low-frequency (LF) sources typically found within mechanical rooms.

One topic that has been deferred to the future involves the extension of the sound transmission class (STC) provisions to both educational and health-care facilities nationwide. This change would greatly expand the scope of application of the NBCC’s acoustical provisions to a wider range of building types. More comprehensive additions throughout the NBCC document would be required to make such a change possible.

The provisions’ scope may be expanded to a wider range of building types.

Where do things stand now, in 2021? The NBCC was not updated in 2020, but the 2015 version added the option of demonstrating either an apparent STC (ASTC) performance of 47 or laboratory-tested STC of 50 for dwellings (or greater when flanking is also considered).

As that edition noted, “An ASTC measurement or calculation will always yield a value equal to or lower than the STC for the same configuration, as the ASTC includes flanking transmission.”

The 2015 NBCC referenced the National Research Council of Canada’s (NRC’s) SoundPATHS software as an acceptable tool for analyzing future performance when flanking is considered as required. Additional reference was made to International Organization for Standardization (ISO) standards in regard to flanking paths, including ISO 15712-1, Building acoustics — Estimation of acoustic performance of buildings from the performance of elements — Part 1: Airborne sound insulation between rooms, and ISO 10848, Acoustics, which comprises five separate standards.

Supplemental tabulations were incorporated to provide “Options for Design and Construction of Junctions and Flanking Surfaces to Address Horizontal and/or Vertical Sound Transmission Paths.” Further, limitations on sound ratings of fans in terms of “sones” was incorporated through reference to CAN/CSA-C260-M, Rating the Performance of Residential Mechanical Ventilating Equipment, and Home Ventilation Institute (HVI) publication 915, Loudness Rating and Testing Procedure. 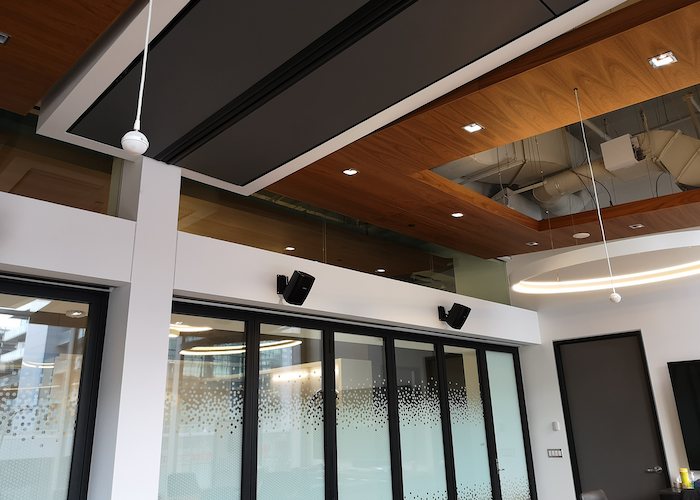 A possible framework for a path forward for the NBCC has arisen through consultation with the International Code Council (ICC), which issued ICC G2-2010, Guideline for Acoustics. The ICC is the parent organization that developed the International Building Code (IBC) as a model. It has been adopted for use as a base code standard by most jurisdictions in the U.S.

Future changes are being considered for IIC in terms of making it a core design requirement and/or requiring post-construction validation testing be conducted, perhaps in accord with ICC G2-2010.

The performance thresholds outlined in the ICC documentation provide a solid basis for possible adoption within Canada, which would support more uniform outcomes for new multi-family dwellings. As it stands now, homeowners’ associations are often left to adopt their own performance standards, which may or may not provide adequate protection of public health and welfare in typical day-to-day circumstances.

Further, even in situations where a neighbour exhibits problematic behaviours, the introduction of rigorous design and performance standards to the NBCC could provide some relief for those residents who might otherwise be afflicted with chronic and problematic noise exposures in their place of dwelling.

At this time, there are no uniform standards for reducing noise from exterior sources, such as transportation and industrial facilities, in terms of allowable interior noise levels.

Some jurisdictions have implemented their own measures, however. In Ontario, for example, the ministry of the environment and climate change (MOECC) published the Environmental Noise Guideline – Stationary and Transportation Sources – Approval and Planning (NPC-300), which places limits on interior noise coming from roadways, railways and aviation sources.

Also in Ontario, the provincial new home warranty program, Tarion, covers acoustics as a risk area to be considered during the design phase of multi-family residential buildings and subject, at least in part, to post-construction validation. The financial and economic incentives of participation in the Tarion warranty program help mandate increased scrutiny of acoustics, noise and vibration issues within multi-family dwellings.

Currently, there are no nationwide regulations for acoustics relating to mechanical, electrical, plumbing and piping (MEPP) systems in multi-family dwellings.

Within Ontario, the Tarion program often supports analysis of risk areas for acoustics associated with mechanical and electrical (M&E) systems through reference to American Society of Heating, Refrigerating and Air-Conditioning Engineers (ASHRAE) Handbook’s chapter on sound and vibration.

Increased scrutiny during the design phase can result in improved outcomes with regard to noise and vibration in buildings. Coupled with building code provisions applied to service rooms and elevators, an early approach can help ensure some relief for occupants.

That said, there are no regulatory limits on the allowable noise from MEPP systems within dwellings, aside from ASHRAE’s prescribed limitations on noise due to plumbing and piping that have been adopted as best practices. A dwelling in proximity to a mechanical room or other rooftop source may well be subject to excessive interior noise levels, due to the operation of the building’s M&E systems.

Indeed, complaints of such equipment noise are fairly common nationwide—and there is a lack of clarity in the engineering community as to the proper assignment of responsibility for rectifying such a problem where there are challenging technical impediments and financial implications. 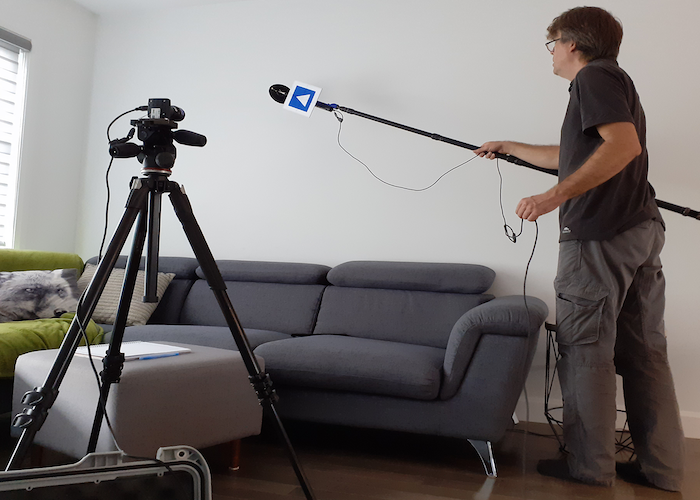 A technician can scan walls for sound leaks.

The NBCC defines “dwelling unit” as “a suite operated as a housekeeping unit, used or intended to be used by one or more persons and usually containing cooking, eating, living, sleeping and sanitary facilities.” Aside from residential dwellings, this definition encompasses individual guest rooms in motels, hotels, boarding houses, rooming houses and dormitories and other forms of business and personal services occupancies. It does not necessarily extend to hospitals, K-12 schools and other facilities where acoustics are also relevant to occupants.

One possibility for the evolution of the NBCC involves the extension of STC provisions beyond residential dwellings to both educational and health-care facilities nationwide. In the case of health care, one existing reference of interest is the Facility Guidelines Institute’s (FGI’s) Guidelines for Design and Construction of Hospitals, which address an array of acoustical issues. Similarly, for K-12 education, American National Standards Institute (ANSI) S12.60-2010/Part 1 (R2015), Acoustical Performance Criteria, Design Requirements, And Guidelines For Schools, Part 1: Permanent Schools, is a reference of interest that could prove relevant for future investigation by the sound and vibration task force working on the NBCC.

Increased scrutiny during the design phase can result in improved outcomes.

As a living document subject to periodic changes and improvements, the NBCC is currently in a code development cycle that is set to conclude in 2025. The collective effort to update it requires contributions from disparate design professionals in a voluntary capacity, to allow for reasoned contributions to be considered and given appropriate weight as proposals are made to change the NBCC in fundamental ways.

This article has provided an outline of some of the most pressing issues under consideration today. The author thanks Morched Zeghal, technical advisor with Codes Canada, for sharing historical information about past versions of the model NBCC that this article references, as well as for ongoing co-ordination of CCBFC activity pertaining to the NBCC 2025 code cycle.

This article originally appeared in the November/December 2021 issue of Canadian Consulting Engineer.