A 'forward-thinking' community in Quebec benefits from a modern sewer system. 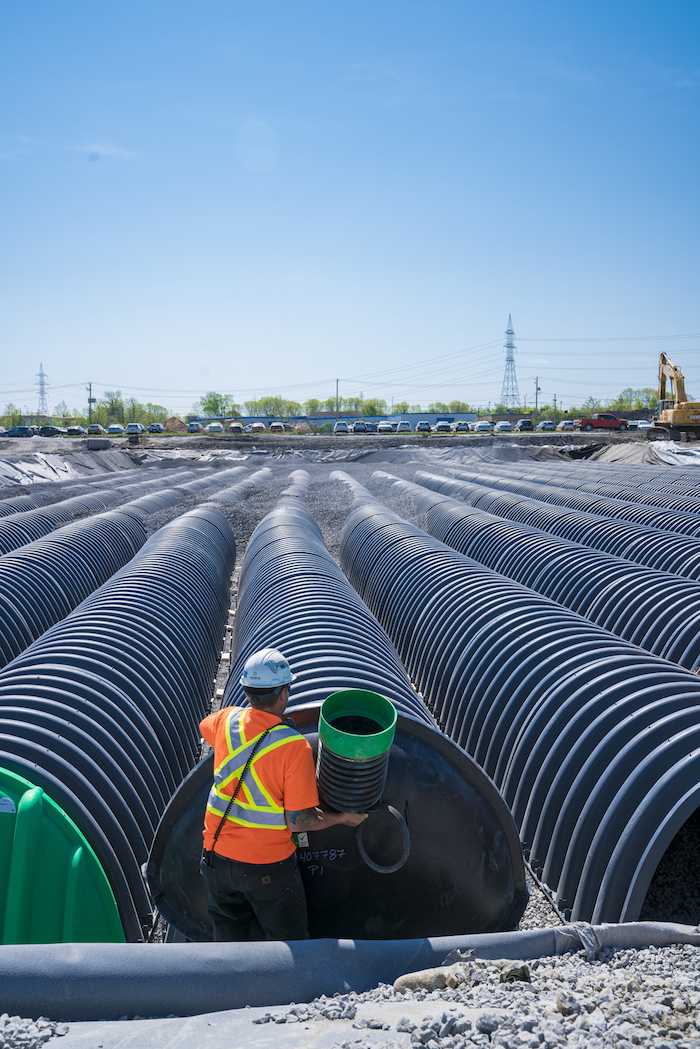 One of the key components for turning part of a former industrial park into Candiac Square, a 2,000-unit residential pedestrian-oriented development (POD) in Quebec, was the stormwater system.

Totalling 165,367 m2 (1,780,000 sf), Candiac Square is located on the southern portion of the Montcalm Industrial Park, close to one of the main entrances of the city of Candiac, Que. Developers and the municipal government wanted to revitalize the area using sustainable practices, with a focus on the benefits of nearby public transportation, as the site is a 20-minute trip away from downtown Montreal.

The $600-million project occupies the former site of the Consumers Glass factory, built in 1966. The residential community, nicknamed Nature at the Square, combines a ‘green housing’ project with more than 17,000 trees across a 10,000 m2  (107,639-sf) central park with its own rainwater recovery system.

The site is a 20-minute trip from downtown Montreal.

This system was designed by consulting engineers at S.M. Group International (now FNX-INNOV) and installed in two phases, starting in 2017 and finishing in 2019, by A. & J.L. Bourgeois. It included two sections: a network of pipes and a pair of underground stormwater retention units. Both used high-density polyethylene (HDPE) pipe, meeting municipal and provincial government requirements for stormwater management. 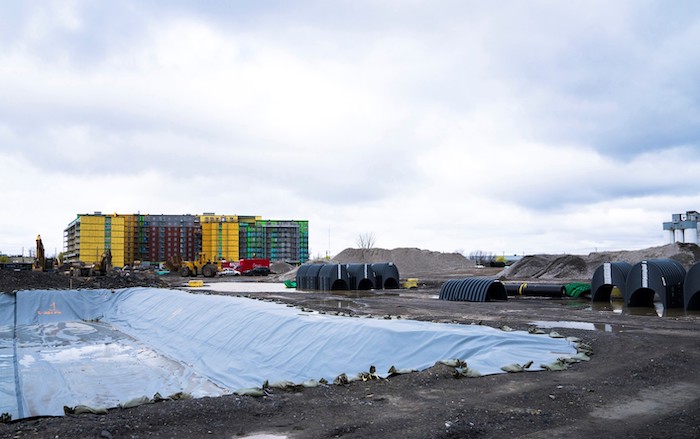 To treat the retained water, an AS-10 Aqua-Swirl hydrodynamic separator was added at the end of the pipeline before it connects to the city storm sewer. More than 1,290 m (4,232 ft) of HDPE pipe formed this storm sewer network.

For each of the two 16-row retention systems, nearly 480 HydroStor HS180 chambers were installed on a stabilization geogrid, then surrounded by clean stone covered with TX-90 geotextiles. The first retention basin is designed for heavy rain events and can store up to 2,505 m3 (88,463 cf) of water, while the second can store up to 2,475 m3 (87,403.8 cf). A waterproof geomembrane and two protective geotextiles were installed on the two excavated areas, measuring 35 m (115.7 ft) wide and more than 66 m (216.5 ft) long.

Ease of installation was key to the project.

The Plastics Pipe Institute (PPI), a trade association, reports the polyethylene (PE) resin produced for the pipe provides a favourable strength-to-weight ratio, ease of handling and freedom from degradation by soils, chemicals, ambient water and moisture, such that it will not corrode or rust. Since HDPE is a non-conductor of electricity, it is immune to the electrochemical-based corrosion process induced by electrolytes, such as salts, acids and bases.

Further, HDPE pipe is not vulnerable to biological attack or tuberculation, resists bio-clogging and maintains high, consistent flow capacities throughout the service life of each system.

“Lightweight and easy to handle, HDPE products do not require the use of specialized equipment, such as a crane, making the installation easier and quicker,” says Currence. “The length of the Solflo Max pipes reduced installation time, as well as the number of joints between pipe sections, compared to traditional concrete pipes.”

As Candiac Square’s HDPE manholes did not need to be oversized, they provided substantial savings in terms of purchase, excavation and installation costs. Their welded design made it possible to assemble the inlets and outlets at the factory, so connecting on the jobsite was efficient. Another feature of the manholes is their smooth exterior wall, which prevents vertical movement during freeze-thaw cycles.

“This storm sewer system provides longevity. There is a growing expectation by communities for sustainability and resiliency.” – Daniel Currence, P.E., PPI.

With watertight bells to provide powerful joints and with either O-ring or integrated gaskets, Soleno’s slightly oversized pipes were fitted together quickly and easily with clips to validate the quality of the installation, as well as the depth of the nesting, for the storm sewer network.

The HydroStor HS180 retention system, made of polypropylene (PP) and HDPE, was also easy to install, due to the lightweight chambers. Designed for heavy volume or restricted space projects, each chamber can store 5.1 m3 (180.1 cf) of stormwater, making them more cost-efficient than alternatives by greatly reducing the area of the burial pit.

The installation of a geogrid helped to ensure a solid and stable foundation at the base of the chambers by distributing linear workloads over a larger surface area. The Aqua-Swirl treatment unit, installed at the outlet of the storm sewer, retrieves suspended solids, oil and grease. Direct access to the unit from the surface facilitates periodic maintenance and eliminates the need to work in a confined space.

“Today, there is a growing expectation by communities for sustainable and resilient products,” says David M. Fink, president of PPI. “As an association, we and our members believe HDPE pipe can meet and even exceed those expectations. This practical, long-life stormwater network, made entirely with HDPE products, won over the city of Candiac. The residents of Candiac Square will benefit for many years to come.”

This article appeared in the November/December 2021 issue of Canadian Consulting Engineer.