Meeting the challenges of converting an old Toronto warehouse into a much-needed music rehearsal space and recording studio. 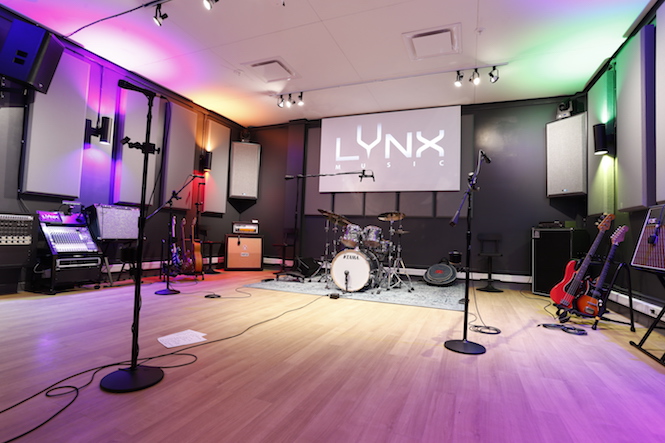 In the heart of Toronto lives a new musical oasis created by artists for artists. Lynx Music, opened in March 2018, is being touted as the solution to a critical shortage of rehearsal and recording space in the city as redevelopment projects have resulted in a severe lack of space to rehearse and record.

The team at Aercoustics Engineering, experienced with working on acoustics for music production and rehearsal studios separately, was faced with the design challenge of incorporating both spaces on this project. It presented a challenge because recording studios and rehearsal spaces require different levels of sound isolation.

The shell of the design was essentially an old warehouse with a masonry exterior—hardly ideal for designing a space that required the right acoustics with precise noise and vibration control. The Aercoustics design team had to take these limitations into consideration and come up with a design that could balance any technical or budget constraints with the sound and acoustic requirements.

The old masonry on the exterior of the warehouse was beneficial as heavy brick and stone limits sound transmission to the exterior and other neighbouring buildings. However, the building presented a challenge because the floor plan provided limited space for wall, ceiling and floor assemblies. This is problematic as a fair amount of space is needed to develop sound isolating rooms. Without acoustically designed walls, ceilings and floor assemblies, it is difficult to manage or mitigate noise transmission.

The building made it impossible to completely separate the rehearsal space from the studio. The approach was to develop a balanced design that allowed for the right amount of noise bleed between less sensitive spaces and provide more isolation to the recording studio.

The design team found a way to create space around the studio block and created a fully floating studio block. This entails having the entire studio block “floating” on resilient mountings. The concrete floor was poured on rubber isolators and then walls were built on top of it. 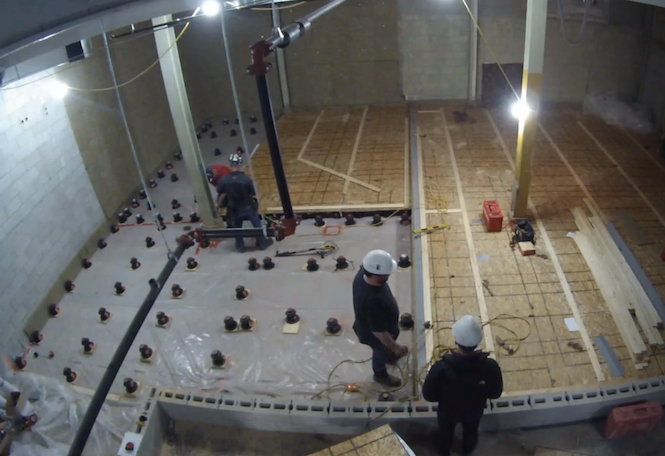 Construction of the floating recording studio, where the concrete floor was poured on rubber isolators. (Lynx Music)

The floating concept is completed with the ceiling being resiliently suspended from the structure with springs. The result is a higher level of sound isolation than can typically be achieved through conventional construction. In fact, the floating design can provide 20+dB of improved performance in sound isolation.

Studio walls and ceilings were treated with 1-inch to 2-inch fabric-wrapped glass fibre acoustical panels to help optimize the acoustics in the rooms and also minimize sound transfer. Rooms that needed greater performance were also equipped with bass traps to control for lower frequencies to optimize the interior acoustic experience. 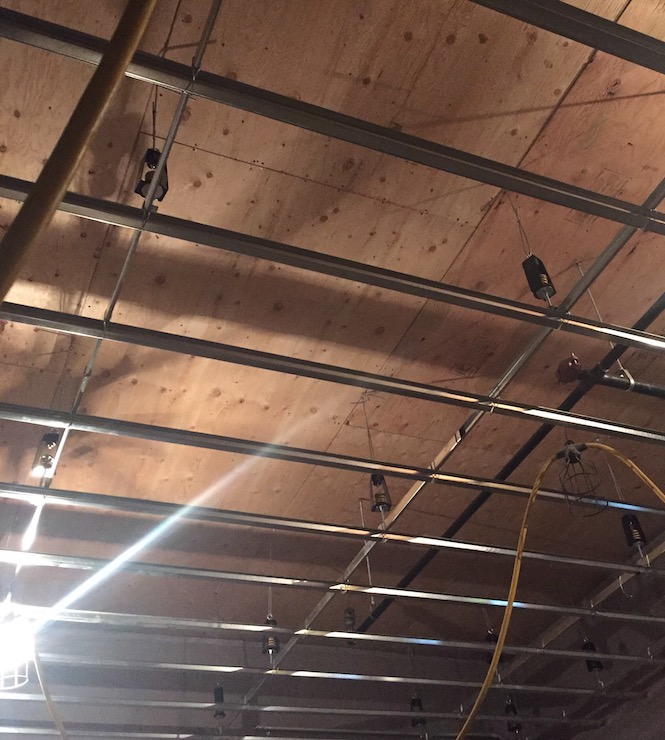 The ceiling was suspended from the structure above with spring hangers to maximize the amount of sound separation between floors.

Windows were filled in with masonry blocks and every door was upgraded with adjustable neoprene acoustic seals for sound isolation purposes. The wall, floor and ceiling assemblies in the recording studio were designed to provide extremely high sound isolation performance with an STC (sound transmission class) rating of partitions ranging from 60 to 70 and an NC-25 (noise criterion) background noise level.

The most difficult element of high-level sound isolation in a recording studio is bass because low frequency isolation can’t be measured by STC.

This was addressed by carefully designing wall assemblies to provide adequate mass and correctly-sized air spaces to keep sound isolated. An isolated wall assembly is made up of two sets of studs, and anything that passes through – ducts, pipes, conduits – has to be done so without rigidly contacting the isolated walls, floors or ceilings. Ductwork lined with 1-inch-thick fibreglass duct liner with reduced airflow velocities was developed throughout the space to minimize noise transfer.

A big challenge of this construction retrofit was determining how to handle the wood joists in the ceiling next to the walls and controlling sound penetration. This was managed by installing plywood at the underside of the joists and the thicker beams were boxed out. The result was increased sound isolation between the two floors and a smooth surface to mate the walls without a lot of penetrations.

An old warehouse can provide an interesting canvas for interior designers and artists but for acoustic consultants, it can be fraught with a series of sound quality and isolation issues.

With such a large demand for music rehearsal spaces and recording studios and limited real estate to create such facilities, it’s likely that unconventional venues in need of a retrofit will become more popular. If so, it’s critical to ensure that there is adequate space to accommodate thicker walls, larger ductwork and any acoustical treatments to the walls or ceilings which can be 25 mm or greater.

Acoustics should be at the forefront when scoping out potential venues not an afterthought. It is much easier and cost-effective to incorporate sound and acoustics into the design than to adjust after the dust has settled. No one appreciates good acoustics more than musicians, so it’s critical to design with acoustics, sound quality and sound isolation in mind, because even the smallest details can have a major impact.