Dick Walters and Don Chambers started their own structural engineering company in Edmonton during the depths of the 1980s oil crisis. The company thrived, but they consciously decided to keep it to a modest size. 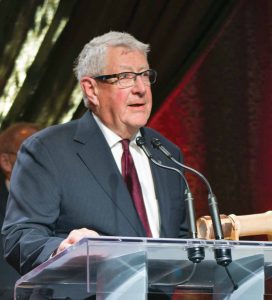 Dick Walters, P.Eng. and Don Chambers, P.Eng. jointly won this year’s Consulting Engineers of Alberta Lieutenant Governor’s Award for Distinguished Achievement. They are the founders of Walters Chambers & Associates of Edmonton. Chambers has retired, but Walters still works at the company as a director along with his son Richard Walters. who is president. CCE talked to Dick Walters in early March.

Q. Why did you decide to start your own company?
Out of necessity. It was 1984, which was certainly a bad time for the economy in western Canada with the National Energy Policy coming in. Don and I were working for the same company and we had downsized to a point where the owner said he didn’t want to downsize any further. Don and I had been doing most of the business development on the structural side, but every time we tried to get some work there was no work to get.
So we thought that if we weren’t going to get paid working for somebody else, we might as well not get paid working for ourselves. And we could build something that we believed in and do it our way.
I had been with that previous company for 19 years, and Don had been with them for 14. So we had a good deal of experience and a few client contacts that stood us in good stead. I had previously spent about five years managing the first phase of the LRT underground in downtown Edmonton. It included building two stations, some tunnels, doing a whole lot of other things. As soon as I finished that project I did the Shaw Convention Centre, which ended up with one of the largest permanently tied back retaining walls in North America.

Q. But things were still pretty tough for you in those early days?
Yes the National Energy Policy affected the whole industry. It was so bad that I would have engineering students who graduated coming to me asking, “Can I come and work for nothing. I just want to get the experience.”

Q. Why did you decide to keep your firm relatively small?
In our previous employment one of the things Don and I found was that we had drifted away from doing engineering, and we were really doing promotion and management, and so on.
We thought that we would like to do some hands-on engineering, to be closer to the clients, and closer to the client needs. So we intentionally said we don’t want to get really, really big.
Based on our experience, there is a happy medium. You can be a fairly small company and be very efficient. Then there’s a transition period where you go from, say, 35 people, to 70 people, which is when you need big systems. But you can’t afford big systems, so you have to get bigger than that.
In our own minds we never wanted to go there. We wanted to keep things closer to ourselves and to be more hands on for our clients.
So that was our philosophy. We grew and we shrank, and we shrank and we grew, as the economy went up and down.
But in truth, from the original four people we never really looked back. We ultimately grew during one of the peaks in the mid-1990s to about 25 people. We have 11 people now.

Q. Did staying small mean that you didn’t make the fortune that you might have?
Let’s say I sleep better at night. I really feel that we made the right decision.