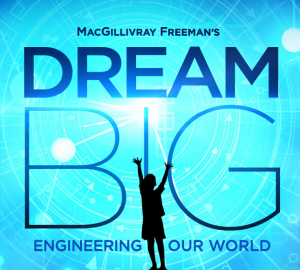 “What you need to be an engineer is a passion for solving problems,” said Steve Burrows, answering a question posed by a high-school student immediately following the Canadian

premiere of Dream Big: Engineering our world, a visually stunning and uplifting film screened in the IMAX dome theatre at the Ontario Science Centre in Toronto on February 17.

Burrows, executive vice president and the U.S. director of buildings wity WSP in San Francisco, was on hand for the screening, which was filled with local middle- and high-school students.

With over 30 years of experience in engineering buildings, including Apple’s planned headquarters in Cupertino, Calif. and the Beijing Olympic Stadium (the Bird’s Nest), Burrows is featured in the film while exploring the engineering marvel of the Great Wall of China. He explained to the students gathered at the Science Centre that the enduring resilience of the structure is in part due to the sticky rice compound that was used in binding the large bricks together. An example of problem solving from centuries ago.

The 40-minute documentary, produced in partnership with the American Society of Civil Engineers and Bechtel Corp., celebrates the human ingenuity behind engineering projects. The film is designed to serve as a vehicle to drive students towards STEM (science, technology, engineering, and math) programs, offering up a fresh perspective on engineering with the aim of inspiring kids, especially girls, towards careers in engineering.

In my personal conversations with professional engineers over the past two months, I hear a recurring theme of how consulting engineers undersell their role in society. This movie serves to highlight that critical role engineers play by showcasing a variety of projects.

“Keeping people safe has always been the heart and soul of engineering,” says the film’s narrator, actor Jeff Bridges, at one point early in the film. Broken into various project-based segments, scenes in the film include engineers studying the aerodynamics of the 128-storey Shanghai Tower and engineers explaining new desalination and wastewater treatment facilities in drought-stricken California.

The emphasis on female role models includes a piece on the design and construction of foot bridges in Haiti, undertaken by Avery Bang, a female engineer who builds bridges in underdeveloped countries.

Another segment includes Menzer Pehlivan, a Turkish-American, who’s filmed traveling to study the aftermath of the devastating earthquake in Nepal and working on projects to engineer safer buildings in seismic zones.

Another storyline follows Angelica Hernandez, a Mexican immigrant turned leading Arizona engineer, who volunteers with an award-winning robotics club at the Phoenix-area high school she attended.

Beyond the motion picture, the filmmakers along with its partners have produced educational materials for schools to reinforce the message.

From what I’ve discovered, engineers are proud of the projects they work on, and initiatives like this film will help to sell their story to the world. I would recommend seeing the film and taking a school-age child with you.