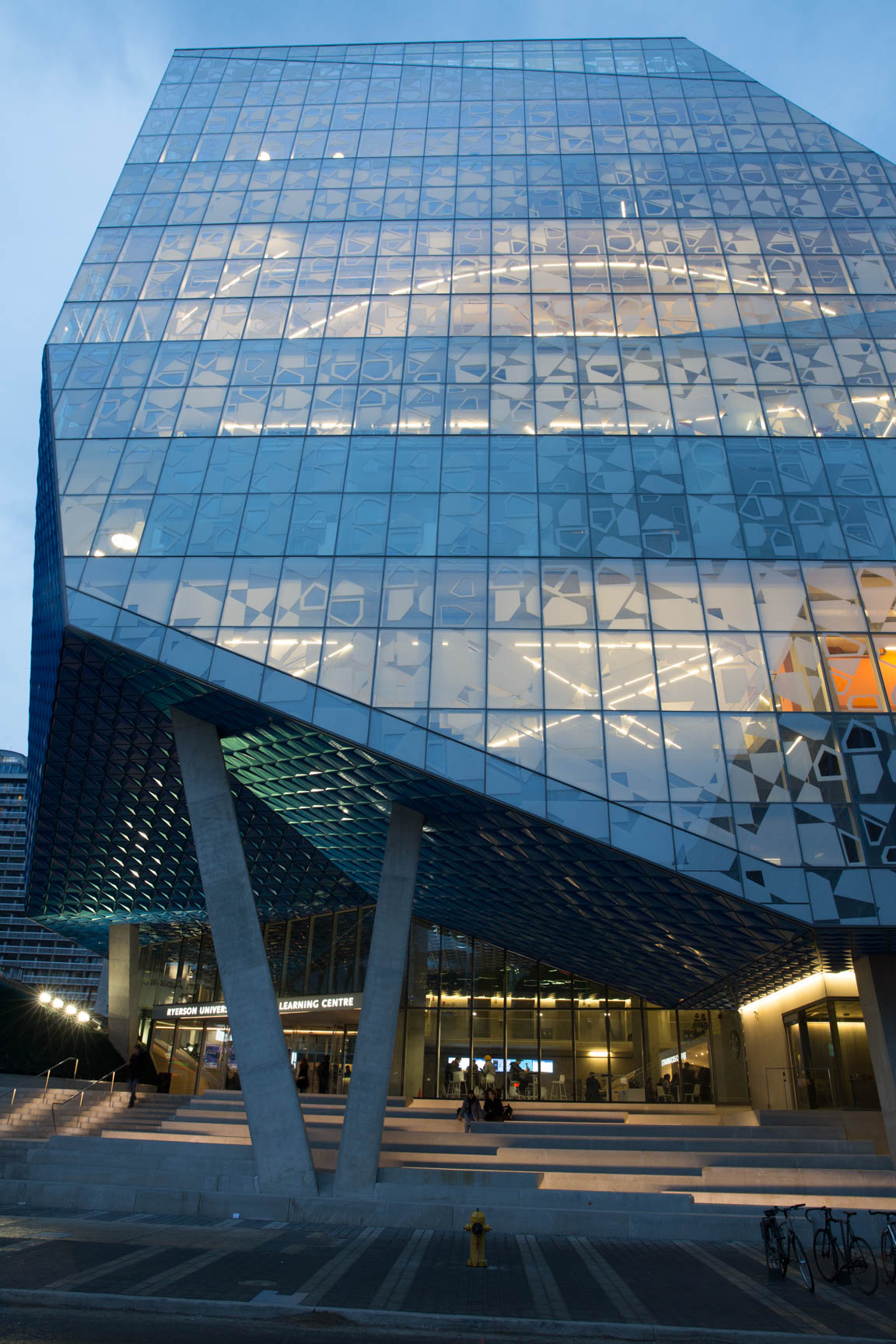 From the January/February issue of Canadian Consulting Engineer

Since 2015 a stunning new building has served as a “beacon” and gateway to Ryerson University off Toronto’s most famous downtown street. Located on Yonge at the corner of Gould Street, the Ryerson University Student Learning Centre provides much needed study space for the students, but is also open and engaging to the public.

Designed by architects Zeidler Partnership and Snøhetta, the eight-storey structure is connected to an existing library but is itself entirely devoid of books. Students and faculty have eight floors of digitally serviced space, with free wi-fi and outlets embedded in the walls, floors and step risers.

Each level of the building has a different theme, explains Mike Smith, senior associate with Zeidler Partnership Architects. The floors vary between those that are lively and full of action, to others that are subdued, quiet and tranquil. The first floor for example is a large almost auditorium-like space with stepped seating where events can be staged, such as a rally or a fashion show. The second floor has a bridge connection to the library, and the third “Tech Floor” is an incubator space for IT start-ups. Above that are the quiet, green-themed “Garden floor,” and the red-and-orange-themed “Sun” floor with open and closed study areas. On the sixth floor is something entirely different: the “Beach,” which is an all-open area with sloped floors where students might be found break dancing, playing the guitar or simply relaxing. The students helped to choose the furniture throughout the spaces. The seventh “Forest” floor is a silent study area with dark earth tones and which allows an area secured for graduate students. At eight, the top floor, the “Sky” space opens and soars to double height with grand views of the city to the south and west.

The form of the 155,000 sq.ft. building was defined partly by its tight site and height restrictions, says Smith, but the architects added interest by chamfering the corners and creating a large “popped up” volume over the main entrance.

The entrance is set back on the street corner at Gould and reached by a broad set of steps. The uptilted roof soffit here rests on V-columns and creates a sheltered microclimate out of the hot sun and cold wind that has become a popular place for people to meet and just hang out. 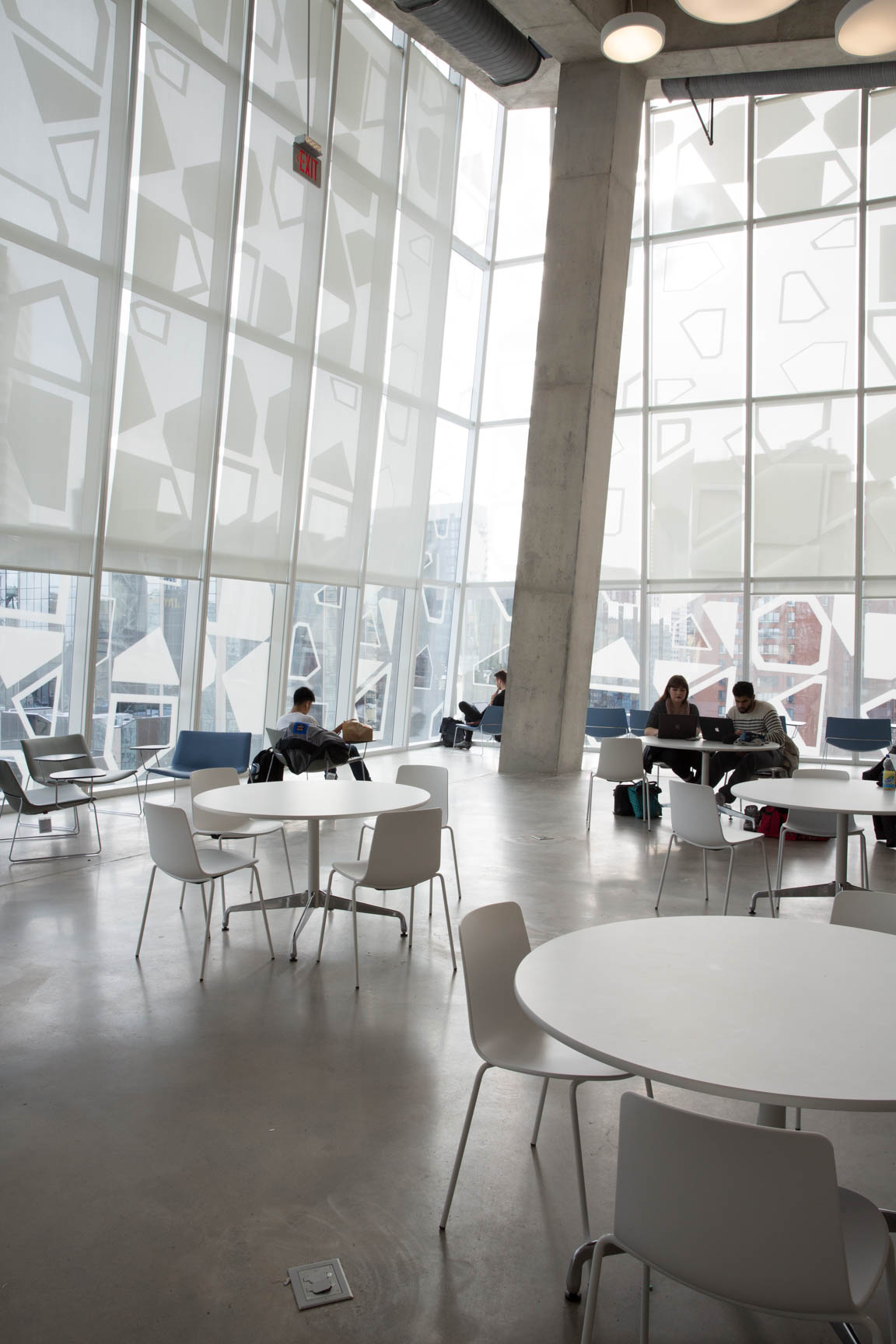 Clear glass provides transparency at the building’s lower and upper levels and corner areas, while elsewhere the building is enveloped in highperformance, three-pane glass that is fritted with a specially designed random geometric pattern. The frits help to reduce glare and reflect heat, providing an almost opaque surface on 50% of the envelope and thus reducing the building’s cooling load in summer. They also have an aesthetic effect: “As the sun moves across the sky, the sun and shadows play across the walls and ceilings,” says Smith.

The construction challenges, he says, were mostly having to fit the building on a tight site with little lay down space. Also the project had a fairly strictly controlled budget “so we couldn’t be too crazy with the design.”

They chose a concrete structure because it provides better acoustic absorption, and left the surfaces exposed, experimenting with the finish colour and texture with a full-scale mock-up. The concrete also incorporates flyash which helped it achieve LEED gold. The flyash also “gives a smoother and lighter finish to the concrete, which was something we wanted,” says Smith.

To add interest without spending a lot of extra money they also rotated the structural grid 45 degrees, so the observer looks up and sees a diamond formation in the ceiling rather than orthogonal bays. The interior has long 11-m spans to minimize the number of interior columns and allow flexibility.

“We also tilted the south face 5 degrees from the vertical to make it more interesting, so the columns are sloped on that side. It added complexity to the formwork,” says Smith. “And in the top “Sky” space we tilted the roof slab to give us a double-height space without increasing the amount of material. So we did some very simple things with the structure that don’t have a large budget impact, but have a big spatial and visual impact,” he says. 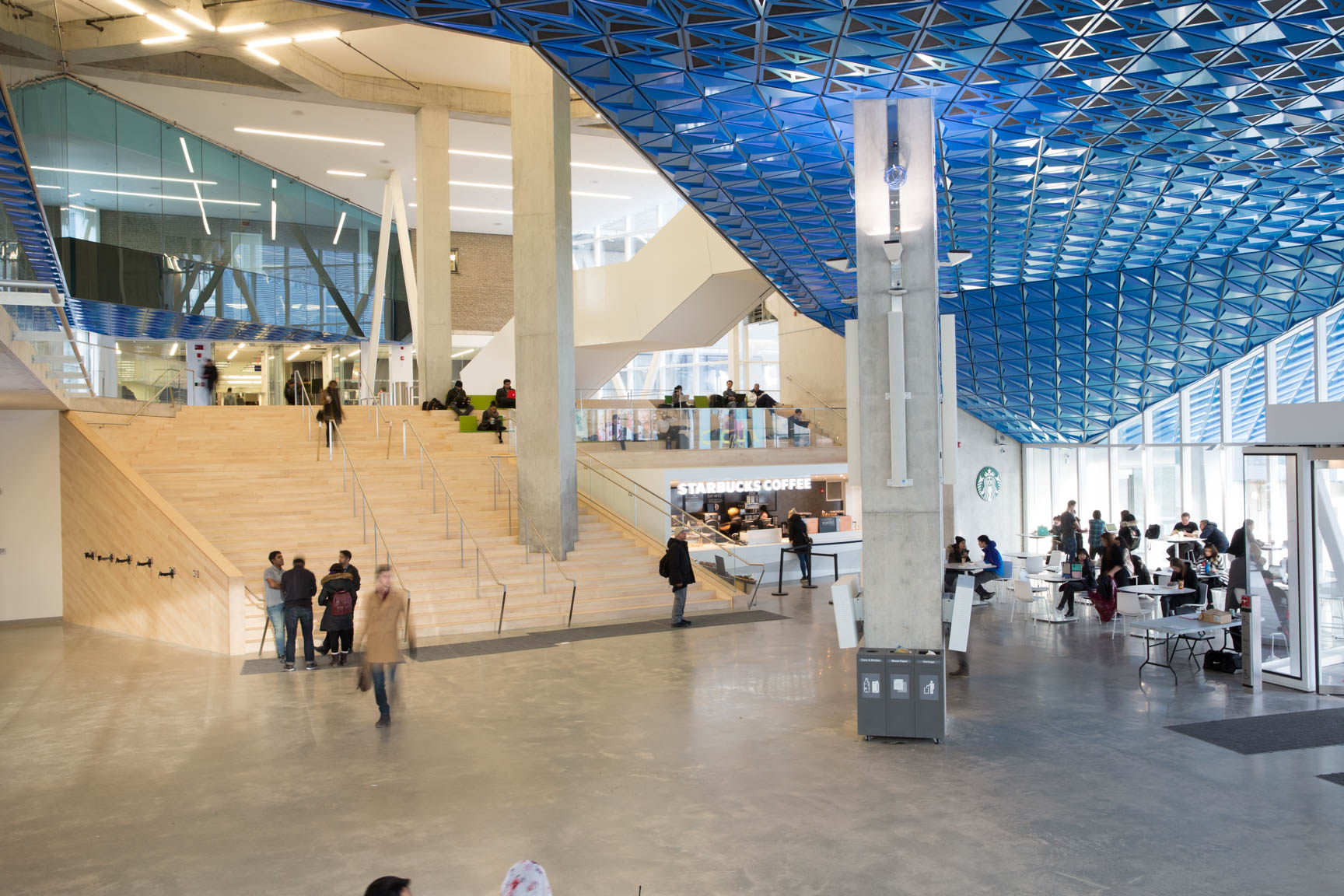 Mechanical design, from the earliest stages of the work, was developed to meet both the energy performance required for LEED gold and to integrate seamlessly with the open ceiling and sloped floors. Revit design drawings were used to plan service routing in 3D and locate sleeves for pipes and ducts to pass through beams in an organized and aesthetically acceptable manner.

The architectural feature of floor-to-floor glazing on the south and west sides of the building caused energy and design challenges. Triple glazing glass and fritting was used to reduce load and energy consumption, while in-floor heating and cooling pipes combined with a dedicated perimeter variable air volume unit were used to provide comfort. The combined use of these systems maintained the clean open building look with minimal mechanical system interference.

The five air handlers required for the interior spaces were separated from the perimeter to permit the two systems to have different supply air temperatures as required. All units were located in the penthouse and distributed air to the spaces served through exposed oval ductwork. Aircraft wire ductwork suspension was used to further enhance the appearance of the ducts. Units were selected for performance and low noise generation. Silencers were used in duct mains to ensure the spaces met desired background noise levels.

The central heating system is based on low temperature hot water heat distribution with two condensing hot water boilers designed to operate at 94% efficiency. The choice of the system suits the in-floor heating and was a major contributor to the energy efficiency required for LEED gold.

The chilled water system for the building is directly supplied from Ryerson University’s central plant. In winter and shoulder seasons the cooling of interior areas is achieved from the outside air free cooling option built into the air handlers. Minimum outdoor air is provided through a dedicated outdoor air unit with a heat recovery enthalpy wheel. The unit supplies a variable amount of outdoor air to all recirculating air handling units based on carbon dioxide readings from the zones served.

The building automation system controls all aspects of the mechanical systems. It was developed to monitor and control space comfort and energy consumption. In addition to regular start/stop optimization, temperature reset, night setbacks, etc., the control system monitors occupancy to shut off lights and ventilation to unoccupied areas, and daylighting controls shut off lights in the perimeter zone when glazing is providing sufficient indoor illumination.

The building’s storm water system is collected in concrete tanks constructed in the basement, and Grey water is pumped to irrigate a green roof as well as to be used in water closets and urinals. The plumbing fixtures were all selected to use the least amount of water possible.

As a ‘Gateway to the University’, the eight-story Student Learning Centre features an elevated plaza and its blue tapered roof creates a dynamic entrance. The lighting design objective was to showcase the gateway identity and create a strong visual beacon. 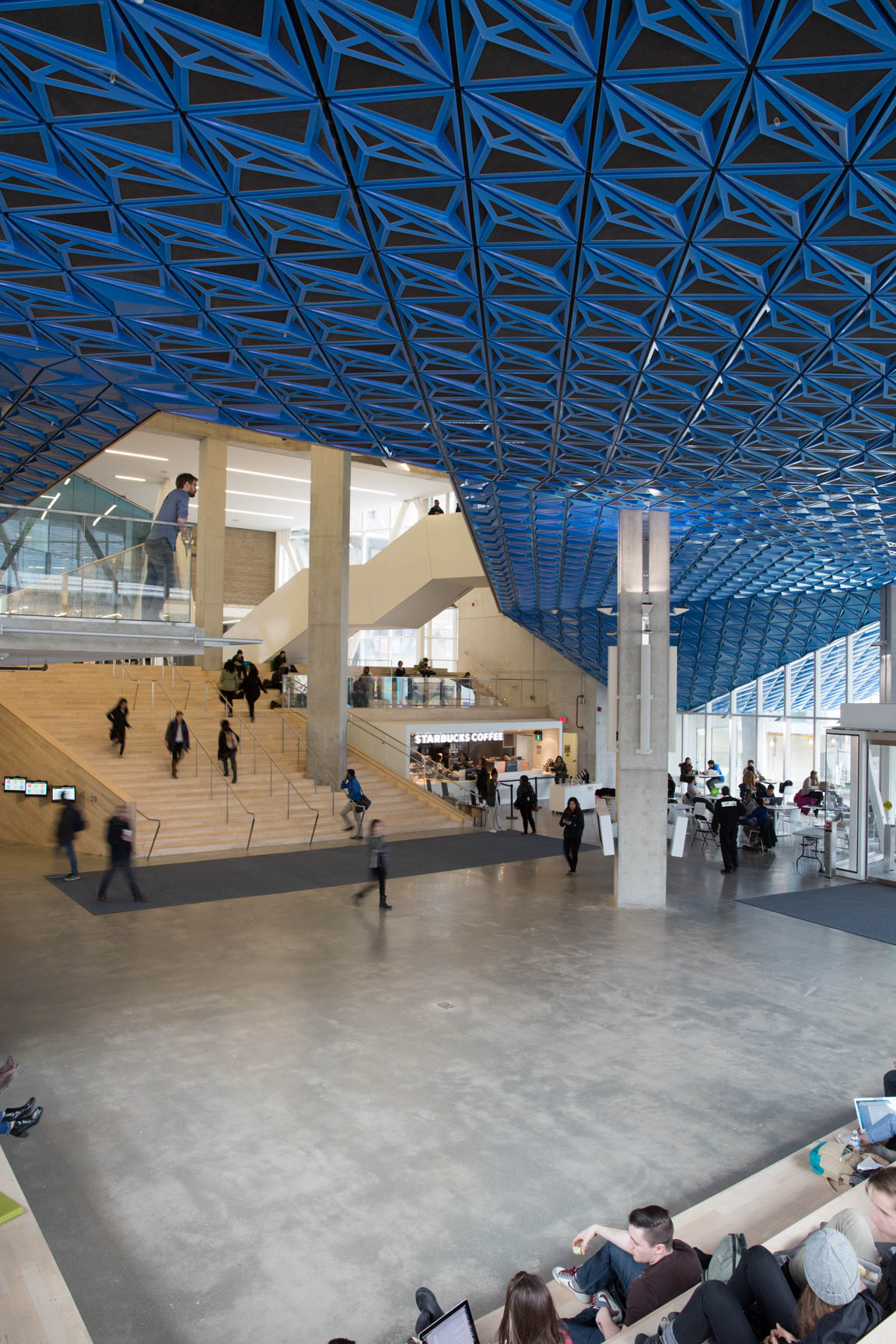 The plaza visual effect extends into the atrium; a series of bare fluorescent strips delineate the diagonal beams to create a powerful dialogue with the juxtaposition architecture. Strip lights were carefully positioned for maintenance from the floor, with the randomness providing a visual reference.

With each floor having an individual identity, the design creates a unique experiential opportunity for learning but also challenged the lighting design. Six lighting schemes were created with light levels tailored to suit each program—custom T5 strips are the common element throughout.

The sixth floor’s unique terrace demanded an imaginative lighting solution as its sloped floor opens up to a downtown view and beyond. Custom T5 strips were assembled to form the circular sun, and multiple on-site mock-ups confirmed a non-obtrusive clean suspension.

The building’s concrete structure is 70% exposed, which provides a vehicle for lighting layers. Strip lights reinforce the geometric beams with uniform ambient illumination. The building is designed to promote collaboration and a decentralized learning environment. The lighting provides flexibility and versatility, facilitating way-finding while also being integrated into the learning experience.

The integration of automated controls kept the project 20% below ASHRAE 90.1-2010, the design is

LEED gold compliant, and the project came together within budget.