Saving energy for the Enercare Centre 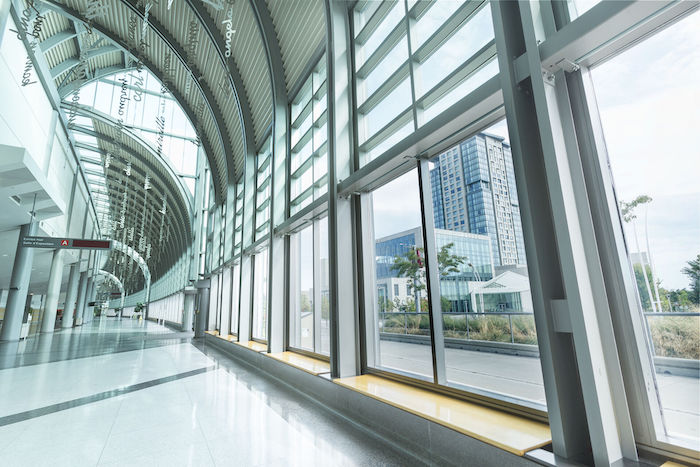 With more than one million square feet of exhibit and meeting space, the Enercare Centre at Toronto’s Exhibition Place is one of North America’s 10 largest convention centres. Located on the shore of Lake Ontario, it experiences temperatures ranging from -31 to 40 C, putting a heavy burden on its heating, ventilation and air-conditioning (HVAC) equipment, which is tasked with keeping the space comfortable for more than 5.5 million visitors each year. The amount of energy consumed to heat and cool the centre is significant, with more than 380,000 kW hours per year just to power the pumps that circulate chilled or hot water to the fan-coil units and air handlers throughout the facility.

The project reduced pump energy consumption by up to 38%. The Toronto Hydro program, designed for qualifying facilities with closed-loop hydronic pumps, covered 100% of the costs, providing an immediate return on investment (ROI) for the Enercare Centre.

Kildonan Energy, a turnkey engineered variable-frequency drive (VFD) system provider based in nearby Markham, Ont., served as the program’s exclusive partner from 2016 to 2019, during which it completed more than 650 projects. As Irina Sivryukova and Rajiv Harnarain, B.Eng.—administrative lead and electrical engineer, respectively, with its energy services division—put it, many utilities provide incentives to businesses to encourage VFD installation for fans and pumps and, indeed, Kildonan continues to work with similar programs today.

“Applying the VFDs dramatically improved pump motor efficiency for the Enercare Centre,” says David Sage, Kildonan’s owner. “The hydronics system design employed constant-speed pumps in circuits using balancing valves that functioned like brakes to regulate fluid flow. As chilled or hot water circulated to fan coil or air handling units in the loop, the valves throttled open or closed to deliver the needed supply water. Using a balancing valve to regulate a constant-speed, constant-flow system, on the other hand, is like keeping your foot on a car’s accelerator while tapping the brakes to control motion; it wastes a lot of energy.” 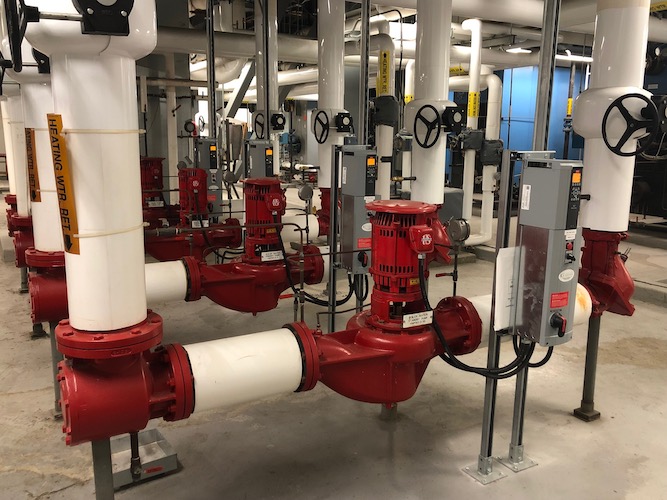 Kildonan added a VFD to each of the pumps in the Enercare Centre’s system to improve overall energy efficiency. As they are designed to vary motor speed, they allow the pumps to match system load requirements without the need for mechanical balancing valves.

Using a flow meter to verify results, the VFDs were ‘tuned back’ to match the existing flow of the system once the mechanical balancing valve was opened to its maximum position, which in turn reduced resistance and power requirements significantly.

A VFD not only eliminates wasted energy inherent to balancing valves, but can also run a pump at its optimal efficiency points. The physics of a pump’s rotating centrifugal impeller are most efficient as specific speeds, pressures and flows, which can be graphically mapped as a pump curve.

‘Riding the curve’ minimizes wear and tear on impellers and bearings, reduces speeds, power consumption and noise levels and achieves the flow rates and head pressures for which the fan coil and air handling units are designed. The physics of Affinity Laws state power consumption in a fan or pump can be reduced by the cube of the change in revolutions per minute (RPM). Thus, running a pump motor at 80% speed (0.8) will theoretically reduce power consumption by approximately 50% (0.8 x 0.8 x 0.8 = 0.512). Indeed, the 80% : 50% ratio has become a recognized rule of thumb.

Not every pump application can take advantage of the Affinity Laws for power. Those using a valve to throttle the output flow, for example, will increase head pressure, making the pump work harder and wasting energy. At the Enercare Centre, this source of wasted energy was eliminated, but pump performance was also enhanced because the drives were optimized to the pump curve.

Going with the flow

Other benefits of the variable-speed drives for the Enercare Centre have come from their built-in ‘intelligent’ features, including the following capabilities:

– Distributing running hours evenly across multiple pumps, so as to minimize wear and tear on individual pumps.

– Limiting amperage draw when a pump motor starts, without the need for a separate soft starter.

– Monitoring system reaction to speed changes with auto-tuning to maintain the required head and flow.

Kildonan’s working knowledge of the products also helped, as the team could ensure peak energy optimization, improve uptime and allow operators to access the system’s functions through the Enercare Centre’s own building automation system (BAS).

The installation uses several pumps per system, in lead-lag or duty-standby configurations. The Pumpsaver program allowed for a VFD on each pump in the system. A specific program was implemented in each VFD’s smart logic controller to ensure the pumps work in co-operation, to maintain control.

In all cases, the lead pump will rotate on an ongoing basis, to ensure equal run time for each pump in the system. In the case of the lead-lag configurations, the lead pump will operate up to a point where efficiency drops off; then both pumps will operate together to maintain the load. In such ways, the programming capabilities of the drives allow the unique attributes of each system to be exploited. 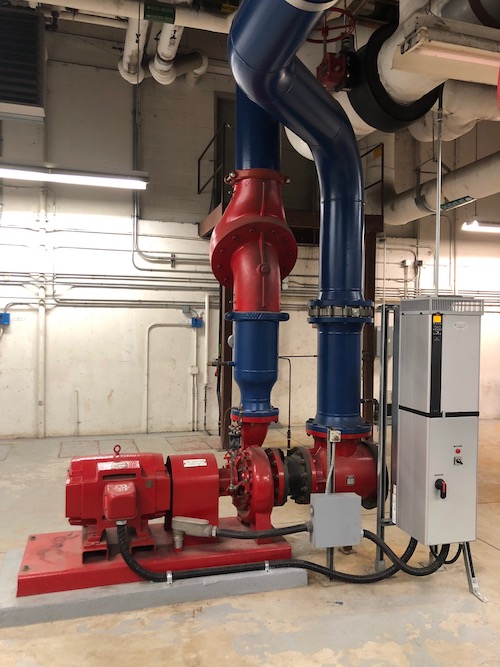 Why it was worthwhile

After the project was completed, the Enercare Centre enjoyed a more efficient pumping system that allowed more stable control and provided significantly more operational information to the building engineers. These features helped reduce the facility’s energy costs, with the found savings going toward further energy-efficiency upgrades.

The project involved four constant-flow systems, three supplying fan coils for cooling and one for a heat pump loop. The VLT drives were applied on lead and standby pumps ranging from 10 to 100 hp. The energy savings ranged from 20 to 38%, averaging 28% overall. Total annual electric savings came to 109,144 kWh, equivalent to consumption by 14 homes over a year. The estimated greenhouse gas (GHG) reductions were 77 tonnes per year, equivalent to taking 17 cars off the road.

Under the Pumpsaver program, Toronto Hydro was able to exceed its own electricity consumption reduction targets every year. And going forward, Sage says he sees opportunities for other VFD projects at Exhibition Place, along with many other customers for district cooling and heating hydronic loops.

“Since the program ended, we are still seeing utilities offering rebates covering up to 50% of project costs,” he says. “Those rebates, combined with pump energy savings, give a payback period under three years, which makes this technology very worthwhile for many pump-intensive applications.”

“The program, Kildonan and Danfoss’ VFD technology provided an end-to-end energy-saving solution that was easy to implement,” says Marius Dragu, building system co-ordinator for Exhibition Place. “Retrofit projects that help us better manage our energy use, cut electricity costs and realize our sustainability goals are a big deal for the Enercare Centre because everybody wins.”

Doug Backman is vice-president (VP) of Danfoss Drives for Canada.