A major transit project got underway during the pandemic’s reduced traffic. 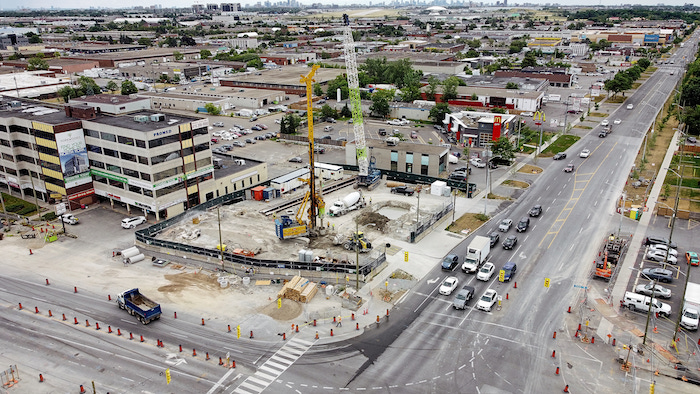 Torontonians could be forgiven if they weren’t aware of the start of construction for their city’s newest light-rail transit (LRT) line. The project got rolling in the early days of the COVID-19 pandemic, when they were actively encouraged to stay at home as much as possible to help flatten the infection curve, rather than walking, taking transit or driving along the project’s Finch Avenue West route as in typical times. Even a rapid bridge replacement (RBR) component of the project, which forced the temporary closure of Highway 400, was not particularly disruptive and went relatively unnoticed.

“This project is categorized as essential, so there was never any pause on design and construction and we haven’t missed a beat,” says Simon Stephenson, associate principal for Arup, the consulting engineering firm serving as the project’s designer. “Permitting agencies worked hard to reconfigure themselves, our dispersed team connected via video calls and the supply chain was strong, in part because other construction projects were stalled.”

The 11-km, 18-stop, $2.5-billion Finch West LRT line in the city’s northwest corner will carry passengers from the Toronto Transit Commission’s (TTC’s) Finch West subway station, which opened in 2017 near the intersection of Finch and Keele Street, to Humber College’s north campus in Etobicoke, where a 90-degree turn southbound could lead to a further extension running alongside Highway 27, at some point in the future.

“Finch West station was identified as a mobility hub,” explains Omid Nakhaei, another associate principal with Arup. “The LRT will help encourage development, community and business investment around this node. At the other end, the line will provide a gateway to the Humber campus, 250 m from the entrance, and a pedestrian bridge over the highway is planned to connect to Etobicoke General Hospital.”

In addition to 16 at-grade stops and the two aforementioned termini, the project—slated for completion in 2023—includes a large-scale maintenance facility just east of Highway 400 and eight traction power substations.

Designing the line for Metrolinx, Arup has been working in partnership with Mosaic Transit Group, a joint venture (JV) between Aecon Concessions, ACS Infrastructure Canada (owned by Dragados) and CRH Canada Group (which owns Dufferin Construction), through a public-private partnership (P3) model.

“We have helped guide the design process based on our experience in safety and efficiency,” says Eric Chiasson, facilities design manager for Aecon. “There are a lot of similarities to the Eglinton Crosstown LRT.”

The east terminus station will feature a transparent façade, skylights and architectural wayfinding elements. The public entrance will be situated on the southeast corner of Finch and Keele Street, leading to an underground platform—though not as deep as the connecting subway station, which was intentionally built further below-grade to allow for the new infrastructure right above it. This way, passengers arriving from downtown Toronto and parts beyond will be able to connect directly to the LRT to continue their journey westward.

“Minimizing the station’s land-use footprint was welcomed by stakeholders,” says Nakhaei. “It will be simple, efficient and elegant.”

“The subway station was designed to allow for underground access between the two lines,” says Wade O’Leary, Metrolinx’s vice-president (VP) for the project. “The LRT vehicles will then emerge to the road surface from a portal. The vast majority of the route is above-grade, which is quicker to build than a subway and carries a much lower cost per kilometre.”

“The upside of an LRT includes good value for money, expandability, lower power consumption and ease of maintenance,” adds Arup’s Stephenson. “The downside is you have to have enough land to accommodate the track. Eglinton is much more densely packed than Finch, so a lot more of that line had to go underground.”

The stops along the route will repeat a shared, modular ‘kit of parts’ to provide both a cohesive appearance and adaptability to various site constraints, all aligning with Metrolinx’s standards and emphasizing ease of construction and maintenance.

“We are upgrading the corridor as a whole,” Stephenson says, “and all of the stops along it will be sheltered. We’ve dynamically modelled and simulated operations for all of them.”

Finally, the west terminus near Humber College will be a trenched stop, due to a grade separation between Highway 27 and another underground section of the LRT track.

“We dive again, into a trench, to contain noise and reduce visual intrusion,” says Stephenson. “We want to minimize the line’s impact on the college and nearby houses.”

While the platform will sit partly beneath a bridge, roof and canopies, it will be open-air—sort of a hybrid between a station and a stop.

“It will have the features of a station, such as access control barriers, and there will be a huge walkway to Humber College,” explains Raja Tenneti, director of P3 services for AECOM, which is leading the technical advisory services team for the project’s alternate financing and procurement (AFP). “The trench will contain tail track for the possible future extension, which could run along the west side of the highway.”

That potential project is just a concept for now. In the meantime, the Finch West LRT line is expected to provide strong community benefits in a busy area of Toronto that has long been underserved in terms of public transportation.

The construction process has also prioritized a maintenance facility near Jane Street.