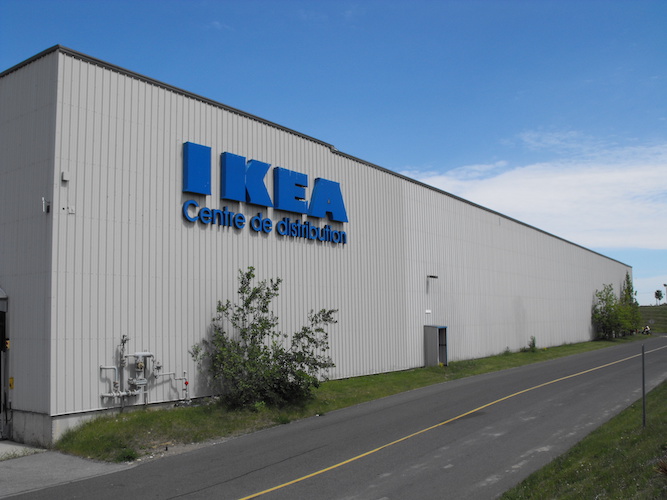 The distribution centre comprises a 79,750-m2 warehouse and 1,641-m2 single-story office complex. In the warehouse, where the roof height varies from 10 to 15 m, the geothermal heating and cooling system is particularly important in ensuring occupant comfort and air quality, while also saving energy and reducing the facility’s carbon footprint.

In 2012, the project was featured in this magazine as a case study and won first place in ASHRAE’s international technology awards for existing commercial buildings.

Since then, it has been operating seamlessly. And as an industry first, i.e. pioneering the adaptation of a chiller with maglev bearings to serve as a heat pump for heating and cooling applications, it has served as something of a demonstration project for geothermal energy performance.

During the heating season (i.e. winter), the maglev chiller serves as a heat pump, drawing heat from a ground heat exchanger (GHX) to an indoor hydronic loop to produce hot water. Inversely, during the air-conditioning season (i.e. summer), it draws heat from the hydronic circuit to produce chilled water, dissipating it to the GHX.

The GHX comprises 46 vertical boreholes, each 183 m deep, using single U-tube piping. The supply and return manifolds for the pipes going into and coming out of the GHX were installed in an accessible underground vault. Groundwater circulates between the manifold and the heat pump through an underground supply and return pipe.

Displacement ventilation is particularly effective at cooling the high-ceiling warehouse because the cool air remains at floor level, due to its higher density compared to hotter summer air. As it does not rise naturally toward the ceiling, heat losses are minimized. In heating mode, meanwhile, the custom AHUs diffuse warm air over the warehouse floor at a relatively high speed, so it also stays ‘attached’ to the floor, by means of the the Coandă effect, i.e. the tendency of a fluid jet to stay attached to a convex surface. There are also ceiling-mounted unit heaters to provide additional warmth in the warehouse as needed for comfort. 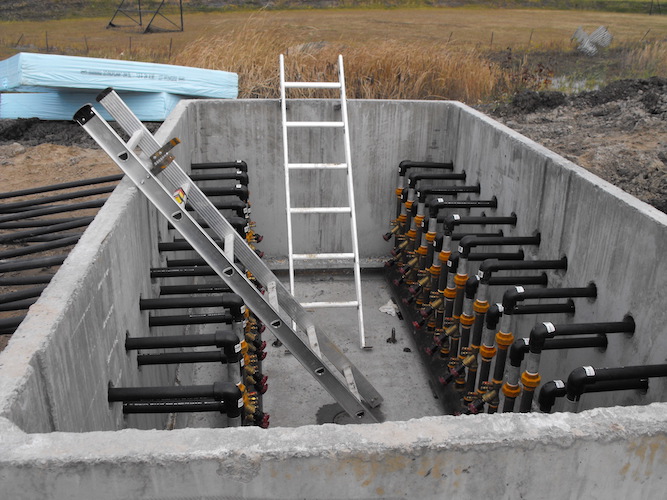 The facility also features natural gas-fired rooftop AHUs. While these have not been removed yet, they are used only when point heating demand increases beyond the capacity of the geothermal system.

The maglev chiller is the principal source of heat. Indeed, the geothermal system can supply all of the needed heating energy for the facility more than 80% of the time, surpassing initial estimates. There is an electric boiler for backup purposes and the gas-fired AHUs come on less than 20% of the time.

In cooling mode, the geothermal heat pump adequately air-conditions the offices and the warehouse. Specifically, during hot summer days, at maximum capacity, it can temper the warehouse air to approximately 27 C, much to the satisfaction of its occupants. Prior to this installation, the warehouse was not cooled at all, so workers often contended with heat-wave discomfort.

The geothermal heat pump and GHX were sized to meet 33% of the building’s peak heating load, supplemented by other heating sources (i.e. the aforementioned electric boilers and gas-fired AHUs), and 100% of its required cooling load. With this hybrid configuration, the system returns to the ground in summer about as much heat as it draws from it all winter, effectively avoiding long-term ground thermal depletion. In fact, measurements confirm the ground shows no sign of thermal depletion and remains a consistently reliable heat source and sink, during all seasons, from year to year.

Aggressively low set points were originally intended for the warehouse to guarantee maximum savings, but these targets were quickly relaxed and raised in favour of thermal comfort. Notwithstanding, the required savings are being delivered. At part load, the hot water temperature is modulated according to actual demand, but the hybrid geothermal configuration ensures the heat pump most often operates at its maximum capacity.

At peak cooling load, the heat pump provides cold water to the indoor loop at approximately 8 C and warm water to the ground at 24 C. So, full air conditioning is achieved with a temperature lift of only 16 C, leveraging the maglev chiller’s extremely high efficiency at part loads. The pump’s cooling COP is 10. The newly provided comfort in the air-conditioned warehouse comes with almost no additional electricity and nearly zero extra cost.

Electrical and other savings

Laboratory testing results indicate this solution is functioning as intended. It contains only 8% propylene glycol and effectively inhibits any biological growth or corrosion. Common antifreeze normally contains 25% propylene glycol for use with chilled water in geothermal ground-heat exchangers.

Yearly savings include approximately 80% and 30% reductions in natural gas and electricity consumption, respectively. (It is worth noting electricity in Quebec is generated by clean, hydroelectric power, producing no greenhouse gas (GHG) emissions.)

Installation and life-cycle costs were also reduced thanks to (a) the hybrid geothermal configuration, which considerably minimizes GHX and heat pump capacity, (b) the silent characteristics of the heat pump, which sidestepped expensive soundproofing measures, and (c) low maintenance requirements, due to the maglev heat pump’s frictionless operation. And finally, the project’s costs were further minimized by incentives from Hydro-Quebec and the federal government’s office of energy efficiency, which provided a quick, simple payback.

In all of these ways, Ikea’s geothermal chiller demonstrates how innovative technology can provide thermal comfort and improved air quality to occupants with minimal energy consumption.

Antonino Lagana, P.Eng., M.Eng., is principal mechanical engineer in building energy performance for Stantec in Montreal and served as engineer of record for the Ikea maglev chiller. For more information, visit stantec.com.