Just over a kilometre from Parliament Hill in Ottawa, a new run-of-river hydroelectric generating station is being built underground. 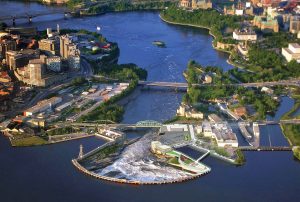 A new 29-MW hydroelectric facility is under construction on the Ottawa River in the heart of Canada’s capital. It will provide 20,000 homes with clean, renewable energy and reduce greenhouse gas emissions by an estimated 115,000 metric tons per year.
The Chaudière Falls Hydro Redevelopment Project is on a unique and unforgettable location just 1.4 kilometres from Parliament Hill, which is visible from the site. Part of the project’s purpose is to preserve these views and create greater public access. Energy Ottawa wanted to provide a public place for everyone’s enjoyment, and to pay tribute to Canada’s First Nations and the long history of the site. Accordingly, the run-of-river facility is being built below grade and every effort is being made to minimize the project’s footprint and preserve the existing ecosystem around the facility.
In 2013, Chaudière Hydro Limited Partnership, a wholly-owned affiliate of Energy Ottawa, retained Hatch to provide services on the fast-track project. Hatch’s work has included the initial environmental services, reviewing the environmental assessment, realigning the intake channel, selecting equipment and preparing preliminary drawings. With construction under way, Hatch is now providing detailed engineering, procurement and construction management on the project which is slated for completion in 2017.

Historical context
and excavations
Energy Ottawa operated six existing hydroelectric generating stations near the Chaudière Falls and many of these facilities date back to the early 1900s. They include powerhouses, control dams and spillways, dewatering structures (bulkheads), and intake and discharge channels.
Two 100-year old stone powerhouses that are within 12 metres of the new powerhouse footprint created challenges during the excavations with regard to vibration control. They were decommissioned at the start of the project excavations and some of their ancillary structures were demolished. Altogether some 65,000 cubic metres of medium-grained limestone and shale were removed. A portion of this material was retained on site and used along with interlaced sheet-pile to construct a cofferdam upstream of the intake channel to allow work to proceed in dry conditions.

New plant – and complexities
Below ground, the project’s impact on the visual, natural, and aquatic environments will be minimal-to-zero. The plant will have a new enlarged intake and discharge channel, allowing a maximum of 340 m3/s through the facility. The intake and tailrace designs were done using Flow 3D so as to simulate and minimize the impact of the facility on the upstream and downstream river reaches.
A new intake canal will convey water to the new 29 MW powerhouse structure. It will contain four turbine generator sets, sluice gates and dewatering gates, with all the supporting governors, control systems and appurtenances. At the discharge end of the powerhouse, a tailrace channel will be built to guide discharged water back into the Ottawa River downstream of the Chaudière dam.
It was known during the design that a fault-like feature existed within the approach channel and during the first phase excavations it was found to be a 1.0-1.8 metre wide dissolution zone that crosses the new intake channel at a 60 degree angle, roughly 45 metres upstream of the powerhouse. The construction work and channel excavation associated with the dissolution zone has been sequenced such that the majority of the construction has proceeded as planned. For now this open geological feature is ring-fenced by a sizeable rock plug to protect the workers and project site from potential flooding. Planning is under way to permanently seal the fault when the Ottawa River is at its lowest flows in late summer 2016. A dive team is expected to assist in this remediation and capping.
Construction of the powerhouse itself began in January 2016 and by mid-May approximately 6,000 of 15,600 cubic metres of concrete has been placed. Installation of the turbine mechanical components (Kaplan turbines with permanent magnet generators in a horizontal bulb) will begin this summer.

Fish habitat, aesthetics
and public space
A downstream passage protection system for the endangered American eel has been incorporated into the design and a spawning habitat for lake sturgeon has been created in the tailrace. Upstream of the intakes, trash racks provide protection against fish or eel entrainment. The fine gauge racks are installed during the eel migration season.
Aesthetics and public amenities are high on the list of priorities. The reinvigorated site will have viewing platforms and public access along a corridor on the new hydro facility’s roof. A bridge will stretch across the intake canal, welcoming pedestrians and cyclists and providing direct access to the falls. In a nod to the area’s proud heritage, two of the oldest existing buildings on the site will be restored and repurposed.