Ice boom cannot be installed upstream to protect the construction works from debris. 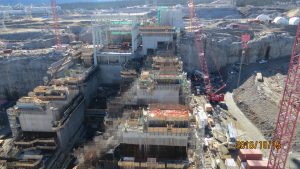 The massive Muskrat Falls hydroelectric project in Labrador could sustain damage this winter because an upstream ice boom to protect the structural works could not be installed in time.

Stan Marshall, chief executive officer of Nalcor Energy, the crown corporation building the 825-MW project on the Lower Churchill River, told CBC on December 2 that the delay in installing the boom was partly due to protests that occurred in October which delayed the project. Now winter ice is  forming on the river which prevents the boom from being installed, which means debris and ice could travel down and damage the site.

Construction began on the project in 2013, but there have been protests from Local First Nations and their supporters in Happy Valley-Goose Bay who are concerned about about methylmercury resulting from the creation of the plant’s 41-sq. km. reservoir. Methylmercury forms when vegetation rots under water, so the critics want Nalcor to clear more trees and vegetation from the land being flooded. Nalcor has said that any methylmercury would be diluted in Goose Bay before it can do damage.

At the end of November seepage was observed in the 450-m, 26-m high temporary rock cofferdam built to allow work on the permanent concrete dam to proceed. Nalcor had to lower levels in the reservoir by opening the spillway gates and it hired SNC-Lavalin, Hatch and other experts to do an inspection and prepare a detailed engineering solution for controlling the seepage. By December 2 the remedial work was under way and the corporation is also finding alternatives to the ice boom for protecting the powerhouse works.

The government of Newfoundland and Labrador is building this and another project on the Churchill River to provide its own residents with power for the next 100 years, but also to export it to the North American electricity grid. A 350 kV HVdc  transmission line will bring the power from Labrador, across the Strait of Belle Isle, to the Avalon Peninsula in Newfoundland. Construction has already begun on the line, which will be 1,100 kilometres long and will have 3,300 transmission towers.

At Muskrat Falls there will be two permanent dams: the north one is being built using compact roller concrete in layers, and the south dam is being built as as a conventional rock-filled dam. The power house will be 90 metres high.

For more information about the Muskrat Falls project, click here.