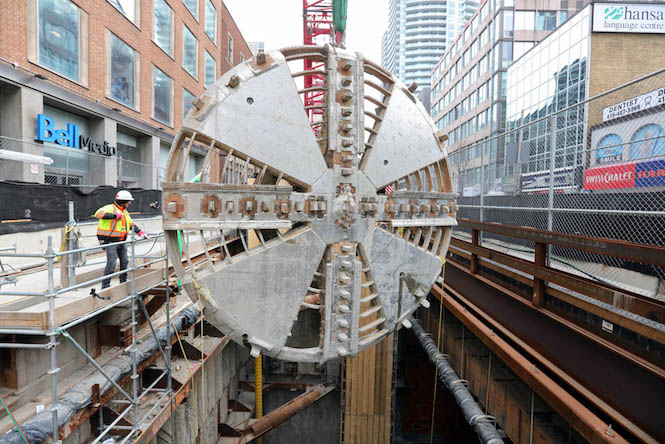 Extraction of one of the tunnel boring machines on Eglinton Ave., just east of Yonge St.

The two TBMs had travelled 3.2 km east-to-west, leaving behind twin concrete tunnels that will envelop one section of the Eglinton Crosstown, Toronto’s new 19-kilometre light rail transit (LRT) that is scheduled to become operational in 2021.

The Crosstown will include 25 stations along Eglinton Avenue with a central 10 km underground section incorporating 12 of the stations. In total, four identical TBMs were acquired for the Crosstown project to tunnel the 10-km stretch. Metrolinx, the government agency created to coordinate and integrate public transportation in the Greater Toronto and Hamilton Area, purchased the machines.

Manufactured by Caterpillar Tunnelling Canada, each tubular machine was 10-metres long (32.8 feet), with a diameter of 6.5-metres (21 feet) and weighing over 400-tonnes.

The machines were custom made to perform in the existing soil conditions, identified by the geotechnical baseline report (GBR) prepared ahead of the tunnelling groundwork.

“The GBR is basically a pictorial of the ground, water table and useful information to let the contractor know what’s in store,” explains John Brown, construction lead for tunnels and cross passages with the construction management team responsible for the east section of the tunnel project.

The tunnel drives, located between 16 and 20 metres deep beneath Eglinton Avenue, were below the water table. The TBM’s ordered were earth pressure balance machines, says Sal Santoli, manager civil infrastructure with Metrolinx, in order to deal with the depth of the job.

“It’s technology that controls the face pressure while excavating, so you’re not removing material at a rate greater than permissible for ground conditions in that area. That could cause settlement of the road surface above,” explains Santoli.

“Generally the pressure wasn’t very high, reaching 2.5 to 3 bar, and in most cases it was 1.5 to 2 bar. So that’s the kind of pressure you want to maintain to avoid ground movement, settlement and the like.”

The TBMs were very sophisticated, automatically adapting to changing conditions. Equipped with pressure sensors, they monitor and report in real time.

“We had some interesting ground to mine through, but there was nothing unexpected,” notes Brown. “We knew we were going to hit saturated granular material and dry clay material.

“When you’re sending the TBM ahead you want it to react to the dry material and make it wetter, and when you’re going through wetter conditions, you are injecting materials to stiffen the ground up to make it the perfect medium for mining.”

He explains there were daily surface monitoring meeting to discuss the active zones (50 m ahead and behind of the TBM) for any movement or trends of ground shifting. A precaution taken to ensure there is no threat of sinkholes or earth movement.

Having four highly-automated machines straight from the factory was reassuring. “When you’re tunnelling you don’t have a reverse gear,” says Brown. Other technology features included monitoring of grout injection while tunnelling to fill the gap left between the diameter of the excavating machine and the diameter of the concrete rings left behind. The soil/muck weight is also measured as it’s extracted through a conveyor on the machine. Over the course of the project 1,165,000 cubic metres of muck was removed. 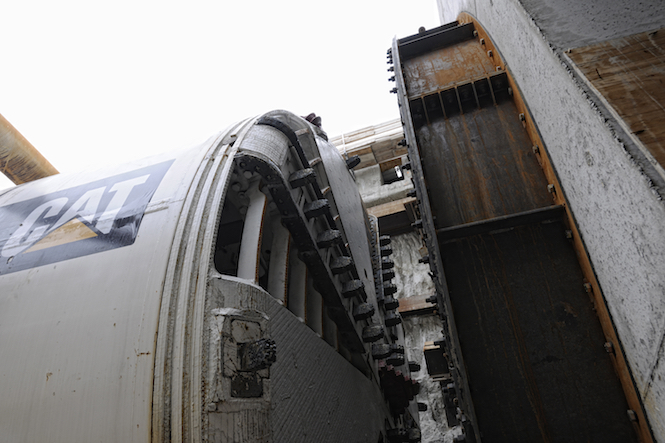 One of the Caterpillar TBMs prior to launch on western portion of the drive.

Within the TBMs trailing shield the operators build and connect the precast segments that make up the segmentally lined twin tunnels. Each ring built is made up of six 1.5-metre-wide segments.

Each segment of the precast concrete was embedded with an RFID code, which allows tracking of every piece to identify when  it was manufactured and where it’s located in the tunnel to address any potential issues down the line. Each machine on the west side alone installed 25,674 precast concrete tunnel segments, which formed 4,279 rings.

A safety feature built into modern transit tunnels is escape routes for passengers in the case of an emergency evacuation. At fixed intervals in each Crosstown tunnel are cross passages that link one tunnel to the other, and emergency exit buildings (EEBs). An EEB is a shaft that drops down over the tunnels, with a staircase leading up and a small building at the ground level with an emergency exit door.

Before the tunnelling began the early works design included installing jet grout walls, headwalls, for each end of the underground stations along the line.  The TBMs then mined through these walls creating a seal between the wall and the tunnel precast rings to prevent ingress of water when the hole for the station is excavated between them.

For tunnelling, the headwall also provided an area where the TBM operators could drive into the walls and create a resting place allowing them to perform regular tool inspections at the machine’s cutting head without risking settlements of the road at the surface.

The first tunnelling contract, awarded to Crosstown Transit Constructors (Obayashi Canada, Kenny Construction Company, Kenaidan Contracting and Technicore Underground), was made up of two portions. It started at a launch shaft about 6.4 km west of Yonge Street (Black Creek Drive) and travelled east. The first TBM launched in June 2013, and the second machine set off about six weeks after that. The launch times are staggered to avoid ground movement with the machines operating side by side. 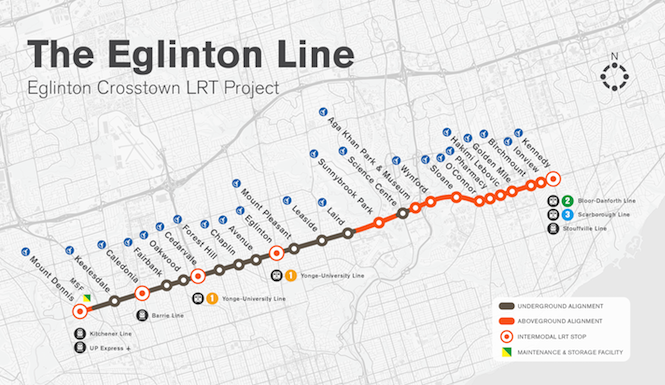 The first section ended when the TBMs approached the existing Toronto Transit Commission (TTC) Eglinton West subway station around the end of 2014.

The Crosstown will run below the existing subway line at Eglinton West and the risk of tunnelling below an operational transit line was avoided.

An extraction shaft was created on one side of the subway station and a launch shaft on the other. The contractor extracted the TBMs and placed them, one at a time, on a specialized self-propelled modular trailer to transport them about 100 metres across the road to the launch shaft.

Precautions were required to move the extreme weight over the existing transit station box, so a small bridge deck was fashioned across the roadway. “The load was suspended across both ends with pillars so there would be no load transmitted to the TTC box itself,” explains Santoli.

The move was done over a weekend, and although it required the closing of a heavily travelled expressway, the event went smoothly. “On this project we had a very engaged community and we worked closely to provide regular updates, and I think that was an important aspect,” adds Santoli.

Both machines were lowered into the second launch shaft and re-launched beginning in June, 2015. They completed their drive by May 2016 and are both currently parked underground where the Yonge/Eglinton LRT station will be built. The machines will be extracted when the station is being excavated.

The 3.2 km east section of the project was contracted to Aecon Dragados Joint Venture. A launch shaft was excavated east of Brentcliffe Road, west of the Don River, and the two TBMs were lowered into the shaft in several pieces that were bolted together and mining started in October 2015, heading west towards Yonge Street.

The tunnel goes slightly uphill, so it is set to a gradient that is suitable for the trains, while the station areas are flat.

On both the east and west drives, the tunnels remain relatively straight, no curves of any magnitude. The average production rate, on the west was 14 m/day, and the east was slightly faster.

“We finished our tunnelling in 11 months, but the extraction shaft wasn’t yet ready, so the machines were parked until the extraction of both machines this past March and April,” says Brown, who was in attendance when the TBMs were pulled out in pieces and shipped away.