Completed in the Fall of 2017, the City of Calgary was the first in the country to adopt the unique interchange design to improve traffic flow with fewer construction disruptions.

Transportation infrastructure serves a critical role in the development and improvement of the growing City of Calgary, which since 2011 has dedicated itself to constant improvement—that is, improvement that makes the life of its citizens better.

This commitment to traffic infrastructure was clear when it came to the need for a new interchange at the high-traffic junction of Macleod Trail and 162 Avenue SE. Located in southeast Calgary, the interchange provides access to major shopping and business centres and the surrounding residential communities. Macleod Trail serves approximately 60,000 vehicles/day, connecting south Calgary to and from the downtown core, while 162 Avenue/Sun Valley Blvd. carries an additional 35,000 vehicles/day.

The former signalized intersection had become a major bottleneck, creating long queues and frustrating delays for drivers who often had to wait several signal cycles to get through the intersection.

Pedestrians and cyclists shared in these delays, waiting long periods of time to cross multiple lanes of high speed and high volume traffic.

In 2014, Calgary’s City Council approved funding for a new interchange, and the City enlisted the help of ISL Engineering and Land Services (ISL) to plan, design and construct the most suitable configuration.

From prior planning dating back to the 1980s, land had historically been reserved at this location for a partial cloverleaf interchange. However, ISL took Calgary’s desire for constant improvement to heart by focusing on innovation. Following a rigorous evaluation and community engagement process, the diverging diamond interchange (DDI) configuration was selected as the functional design for this location because it would enhance mobility for commuters, transit users and cyclists; increase access to surrounding businesses and services; and allow for innovative construction staging that would avoid major detours and accommodate active modes of transportation.

What is the DDI?

The DDI concept originated in France, which has had three in service since the 1970s. Since 2009, the DDI has evolved primarily in the U.S. as retrofits to existing interchange structures where there are now over 80 in service and many others in various stages of planning, design or construction.

The operation of the interchange follows its namesake by “diverging” traffic on the minor street to the left-hand side of the road through two crossover intersections. This enables left-turning traffic to access the major thoroughfare without waiting for a signal or crossing oncoming traffic, nearly halving the number of conflict points compared to a typical diamond interchange. Right-turning vehicles use slip lanes away from the intersection to bypass the crossovers.

With turning movements removed from the crossover intersections, the traffic signals can operate on a short two-phase cycle, improving safety and efficiency.

As with any road innovation, the risk of driver confusion was top of mind for the designers. While an aerial view of the DDI can lead to some apprehension, once at street level, the roadway configuration, approach angles, placement of curb lines and islands, strategic use of signage and clear road markings significantly aid drivers’ understanding of the interchange configuration.

Since most of the prior U.S. applications were retrofits of existing diamonds, there are no fixed standards for the greenfield construction of new DDI interchanges. The U.S. Federal Highway Administration published an informational guide for DDIs in 2014, and guidelines are available from various state-level Departments of Transportation. As one of the few relatively greenfield DDIs to be implemented to date, ISL found a number of opportunities to innovate and improve on existing geometric design practices while also reducing construction time and cost. The knowledge gained in Calgary can now be of benefit to other jurisdictions in the future.

The Macleod Trail DDI includes three bridge structures: one carrying each direction of 162 Avenue over Macleod Trail and a third basketweave structure to accommodate local access ramps to the adjacent shopping centre.

Design of the DDI put pedestrians, cyclists and transit users at the forefront. Pedestrians and cyclists are also uniquely accommodated by converging the exterior pathways from all quadrants of the interchange into the centre of the overpass. This approach reduces the total number of road and lane crossings for pedestrians, and where crosswalks are placed, they cross only one direction of traffic at a time. By allowing all users to cross “kitty corner” through the centre of the interchange, travel times are reduced.

It was a better option for transit priority accommodations compared to other interchange configurations and provided a better balance across all transportation modes.

The roadway curves of the DDI encourage lower vehicular speeds, have fewer conflict points overall with the turning movements separated from the crossover intersections.

Road crossings pass a single direction of vehicular traffic, and the walking distances at crosswalks are reduced by allowing all four quadrants to be accessed from the single central pathway.

The DDI design differs from traditional diamond interchanges because the two directions of traffic on 162 Avenue briefly cross to the opposite side of each other on bridges over Macleod Trail. This allows more effective traffic flow at the signalized intersections within the interchange and enables left-turning vehicles to proceed without crossing opposing traffic. 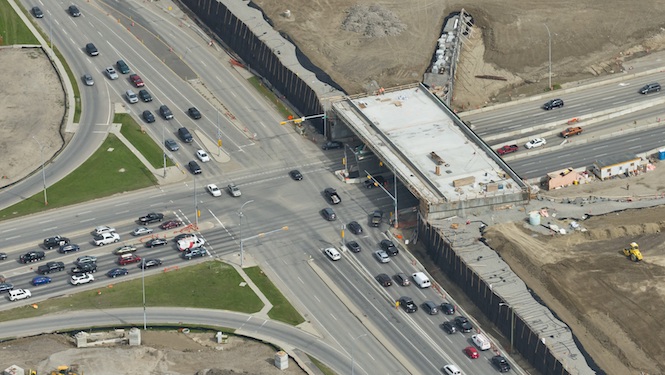 The design of the DDI enabled construction with minimal traffic disruption.

Constructing an interchange over an existing active intersection is no easy feat. Additionally, being that the interchange was located in an established area, ISL faced the challenge of constructing the new interchange without limiting access to the nearby residences, schools, businesses and services.

The traditional approach is to construct a major detour road. The split bridge design of the DDI, however, offered a unique construction sequencing opportunity by splitting the opposing directions of travel on two bridges and constructing the first of the two structures offset from the existing intersection. This allowed the project to proceed with bridge construction without major detours.

Using wireframe retaining walls that were ultimately buried in the interchange fills, the entire south half of the interchange was constructed in the first nine months of 2016. Once completed in October 2016, traffic was shifted onto the new bridge and it became, in effect, an “interchange detour” that opened Macleod Trail up to free-flow traffic a full year ahead of construction completion.

The major congestion issues in the area that had originally driven the need for the project were resolved in the middle of the construction period, providing significant relief to all users.

The north DDI bridge and connecting ramps were completed in August 2017, allowing the detour interchange to be permanently changed over to the DDI configuration.

First, But Not Last

The DDI was completed on schedule and on budget and Calgarians received a higher quality outcome, at lower cost and in less time than a traditional interchange.

Canada’s first DDI involved the close collaboration among the City, ISL and Graham Infrastructure. The interchange has attracted national and international attention to Calgary for its forward-thinking approach to transportation design.