A heritage building at 180 Wellington Street in Ottawa has been hollowed out to provide temporary space for the federal government while the Parliament buildings across the street are being renovated. 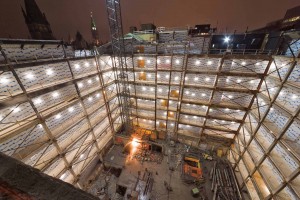 180 Wellington Street, Ottawa, under demolition. The central core was removed for the new purpose. Photo: PCL.